Sunday morning dawned wet and dreary. I managed to haul my aching body out of the bed and downstairs to breakfast. I decided to fortify myself this morning with the "full Irish" It was not a wise move, as full of rashers, egg and sausage, the thought of crawling back into bed rather than scrambling around in the rain, was much more appealing.However Tutor Michael turned up at 09.00 as promised and he had a plan!

He decided we would go to Crag Cave in Castleisland, the rain would not stop us underground. As I was going to visit my brother that evening in Fossa, I was to drive my car as far as Killorglin and we would travel on from there together. Hoping I was going to be following a Formula 1 driver on the narrow twisty roads, I se out to follow the 2 Michaels. I needn't have worried, I was able to keep up.

We arrived at the cave, we could only enter it as part of a guided tour. We were a little early so there was time for a nice big cappuccino while we were waiting. My knee was bothering me from the fall yesterday but I was doing my best to hide it, My biggest problem was that I couldn't put weight on it to get out of the car. When the others weren't looking I would grab it with my hands and lift it out. Once I got going I was fine.

The tour began and we were given the background information. It was discovered in 1983 and is thought to be over a million years old.  When it was first discovered the only entrance was through a flooded passageway. This is a 24 ft tube, it goes down 12ft under a shelf in the rock and up 12ft into another cavern and it was from this cavern that it was first discovered.

Surprisingly, the entrance lay behind a locked metal door. It could have been the door to the garden shed. No wonder I have a fascination with doors. You never know what lies behind them. We were warned that the steps down into the cave were slippy and the two Michaels were at pains to make sure I got the message. Hauling me up once, was enough for them! 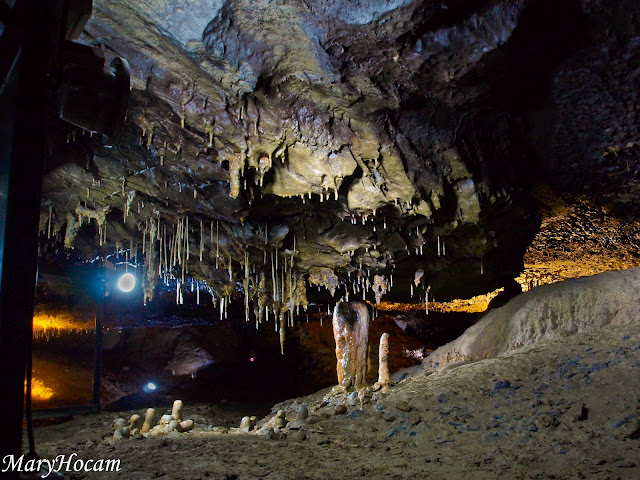 So struggling with the tripod again, I finally got set up, ISO was changed and we were taking photos again. We didn't have a lot of time as there was another couple on the tour and at the end, the guide was anxious to get back. She was only supposed to be underground for a certain length of time, she had to be back to work above ground again. 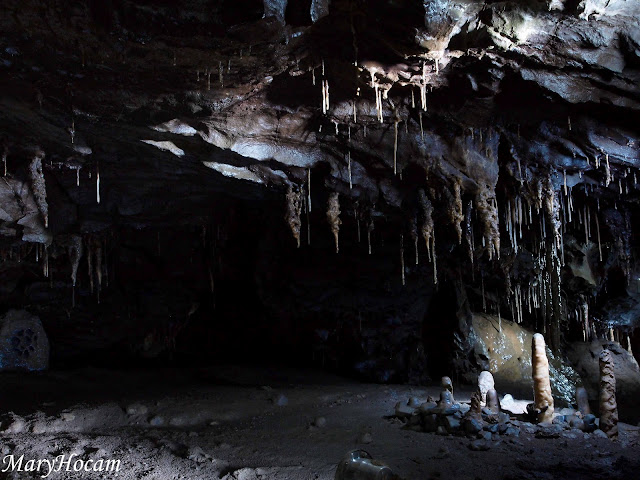 Tutor Michael  enquired of other places of interest locally , and she told him of a viewing point and a River walk complete with castle. We found the viewing point with no difficulty but to be honest that day there was not much to see.. Tall Michael didn't get out of the car but Tutor Michael wanted to see if I had learned anything yesterday and could I reset the camera myself. Exam time..... score!! I got it right. He is a good teacher because I'm a slow learner.


We then went back to the river walk in Castleisland. The guide earlier had told us we could see a castle there. We found the castle but it seemed to be in someones back garden and there was no way to access it or even get near it, in spite of walking around the block. They were all terrace houses and the castle was at the back! Imagine having a famous monument and only being able to get a glimpse of it . So what was there left to do but to repair to the pub for lunch. 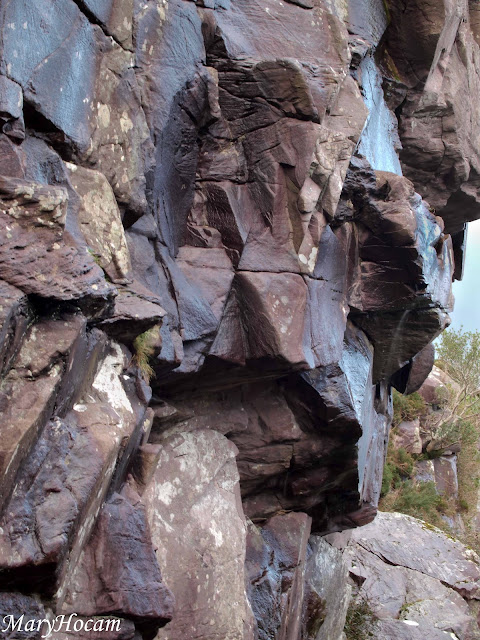 The weather had cleared a little so it was decided that once again I would follow the two boys to the Gap of Dunloe. I would be passing by my brothers front door. Tempting! It was still very windy with the occasional showers .Did you know that the weather is the main topic of conversation in Ireland? I had kind of lost the will....but off we went again. 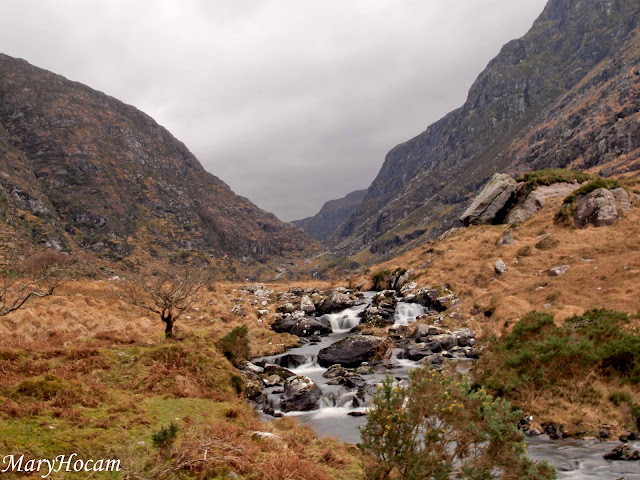 We drove right through the Gap until we were looking down on the Black Valley. Finally, the light gone we turned back.

But you couldn't go through the Gap without stopping at Kate Kearneys Cottage, another pub. You'd think we were hardened drinkers, but 2 coffees and a soda water soon gave this the lie.

We parted on great terms and hopefully we'll meet next June. Tutor Michael wants to photograph the birds on the Saltee Islands. I feel I learned so much this weekend in a relaxed stress free manner. In addition, I truly enjoyed the company of my two Michaels and the gorgeous Eva.

I headed back to the brothers. Dinner was ready. How lucky am I, he is a chef and a good one. We spent half the night and the next morning talking before I set out for home. He was heading to Chile for a birthday party the following weekend. Cilgin Kiz has a Cilgin brother and she is very jealous of his trip.