This day fortnight I'll be winging my way to Turkey for the summer. I'm sitting down to make a list of what I need to do. As soon as I get there I will do the usual list of jobs, a big shop, pay the house insurance and the council tax. This year I have a more urgent job topping the list and it springs from a very near nasty incident at the end of last summer. 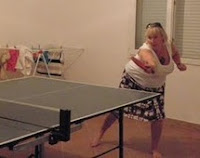 It was a lovely summers evening, Metin had come to visit and we had had a very loud raucous game of table tennis, you can see from the action here that I'm not in the slightest bit competitive. And a Turkish man let a woman beat him.... you can picture the scene. 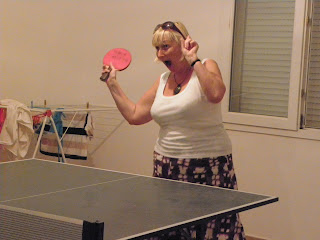 The temperatures were in the high thirties, and that was just the weather. For once I was on form and had won my game.  We were tied so in the interest of entente cordiale we retired to the terrace to eat some ice-cream and have a long cold drink.

Nature called. I decided to use the loo in my bedroom as I also wanted to turn on the air conditioning. Air conditioning on, not to be indelicate I was doing what a girl needs to do.
Sitting on the "throne" I happen to glance down and there not 6 inches from my foot is this small brownish creature. Oh oh, it has a tail that has a distinctive curve to it. Now I will have to admit while I'm no Miss Muffet - I can take spiders, bugs or moths in my stride -I draw the line at snakes and scorpions. It was a good job I was sitting on the loo, I certainly needed one. The sight of this tiny creature frightened the **** out of me. However, this led to its own problem. Sean was not at home that left only Metin to summon for help, not something I could do from the loo. It was the longest couple of minutes (probably only seconds) that this guy and I had a staring match.

Why had I taken up the Turkish fashion of removing my shoes in the house? Trying to take my feet off the floor and finish what I was doing was an even more awkward position than using a Turkish toilet.
Finally, I shot off the loo and raced for the door being careful to avoid my new found friend.

I hollered for Metin. He came to the foot of the stairs. It was not normal to ask a young man up to the bedroom. He hesitated. I quickly explained using frantic gesticulations. I had never needed to learn the Turkish word akrep before and I certainly wasn't going to take the time to look it up in the dictionary.

He finally got the message. There was too much panic in my voice for me to have lost my reason and be inviting him to my bedroom. He bounded up the stairs and took a look. The scorpion was still in the same place, he took a can of shaving foam and hit it a fatal blow. Then the lecture began. Why had I waited for him. I should have killed it myself. The scorpion could have disappeared under the shower to emerge again when he saw fit. Yada yada yada. He was worse than hubbie, and there was I just shaking in terror.

What was worrying me more was where was the scorpions family? Would they swear an eternal vendetta for the contract I had taken out on one of their family members? A scorpion mafia is to be feared. Metin also told me that there were two types of scorpion in Turkey and this one was the more poisonous variety. Gee, he knew how to reassure a scared woman. Probably revenge for winning my game of table tennis.

I made Metin go through the whole bedroom. He looked behind pictures, wardrobes, under the bed. I even had him strip the bed clothes to check for more scorpions. I didn't want to cosy up to one in the night. The whole time he was laughing at me for being such wimp! All I could do is thank my lucky stars that Ireland has no real nasties. Saint Patrick threw out all the snakes. I can cope with a few midgie bites in summer.  We don't even have mosquitoes.

It  took me several nights before memory began to fade and I slept easy again. I got a regular teasing as too why I was so scared of something that was only about 4 cms long, especially if there was an audience.

A couple of weeks after I returned home I had a call from Metin. He had had a bad night. He had awoken from sleep to find a scorpion on his leg! He managed to kill it before it did any damage. He left it in the corner of his room as a warning to all other scorpions that might come his way. But he too had a few sleepless nights.  What goes around comes  around! I'll have to admit to taking pleasure in his sleeplessness, once I knew he was unharmed.

Top of my to do list this weekend. Ring Metin and ask him to put down pesticide before I arrive. No more unwanted visitors please!
Posted by Maryhocam at 11:55 PM