The Temple of the Tooth - Kandy

According to legend, when Lord Buddha died , his left canine tooth was discovered in the ashes. This tooth is believed to have come from India to Sri Lanka and is now housed in the Temple of the Tooth Relic in Kandy. Thousands of people flock to the shrine to see the casket housing the tooth  which is put on display three times a day among much fanfare.
Our driver told us he had a guide organised for us. We were not allowed to delay, we had to go hand in our shoes, and head straight to the door of the main complex. I understood as the guide was waiting but  there were small buildings dotted around the complex just calling out to me to be photographed. Ah well, I would get them on our way back. After all, we had all day..... or so I thought!! Our guide, while knowledgeable, spoke at knots an hour and rushed us through the Temple. He told us it was because we had little time, the showing of the casket would begin in half an hour and our tour must be finished by then. Maggie later found out he was booked to give an English lesson.

I was the holder of the " kitty", our joint funds for paying entrance fees, tuk tuks etc. I was instructed by the others to give a 100 rupee tip. I thought it was very little, about €1.50, but then wages were also very low, tipping should be proportionate, I assumed. As soon as we were finished the tour, the guide asked us for money. I was taken aback. I didn't think normally asked for their tip and he had whizzed us through the temple. However, I handed over the agreed tip and was told in no uncertain terms it was not enough. I was now equally embarrassed at offering too little and annoyed at being asked for more. I wonder was his name Oliver?

I gave him another 100 and he handed me back the two notes and told me he didn't want the money. Boy oh boy. I wished I had done my research first and checked out the going rate! I had obviously mortally insulted him. At the same time, our tour had resembled speed dating. Move to a certain point, get the required information in as short a time as possible and then move on! So I took our money and put it back into kitty as he obviously wasn't going to accept it.


Next came embarrassing moment no. 2. Maggie had seen the Temple before, but Sue and I hadn't. We decided to split up and go our separate ways to explore it at our leisure. We needed to meet again to get our shoes. Maggie had the ticket. The ceremony was about to begin. Maggie said to meet in 30 minutes, Sue wanted an hour. There were words exchanged and a bit of storming off! Heigh ho!


I wandered around the main temple area. The flower offerings were beautiful and so many people sitting in the floor praying. 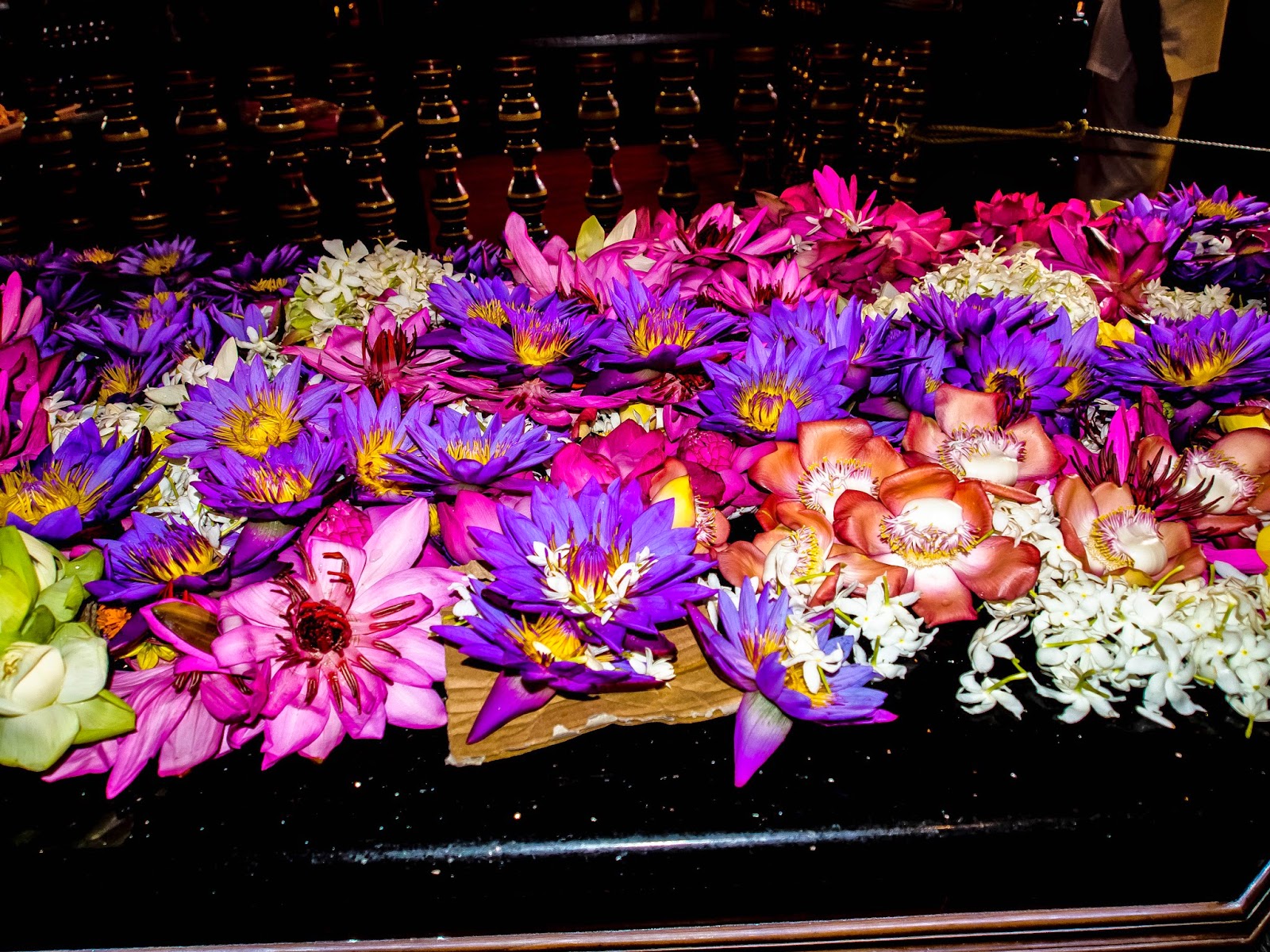 Drums and flutes, all kinds of fanfare heralded the Tooth going on display. 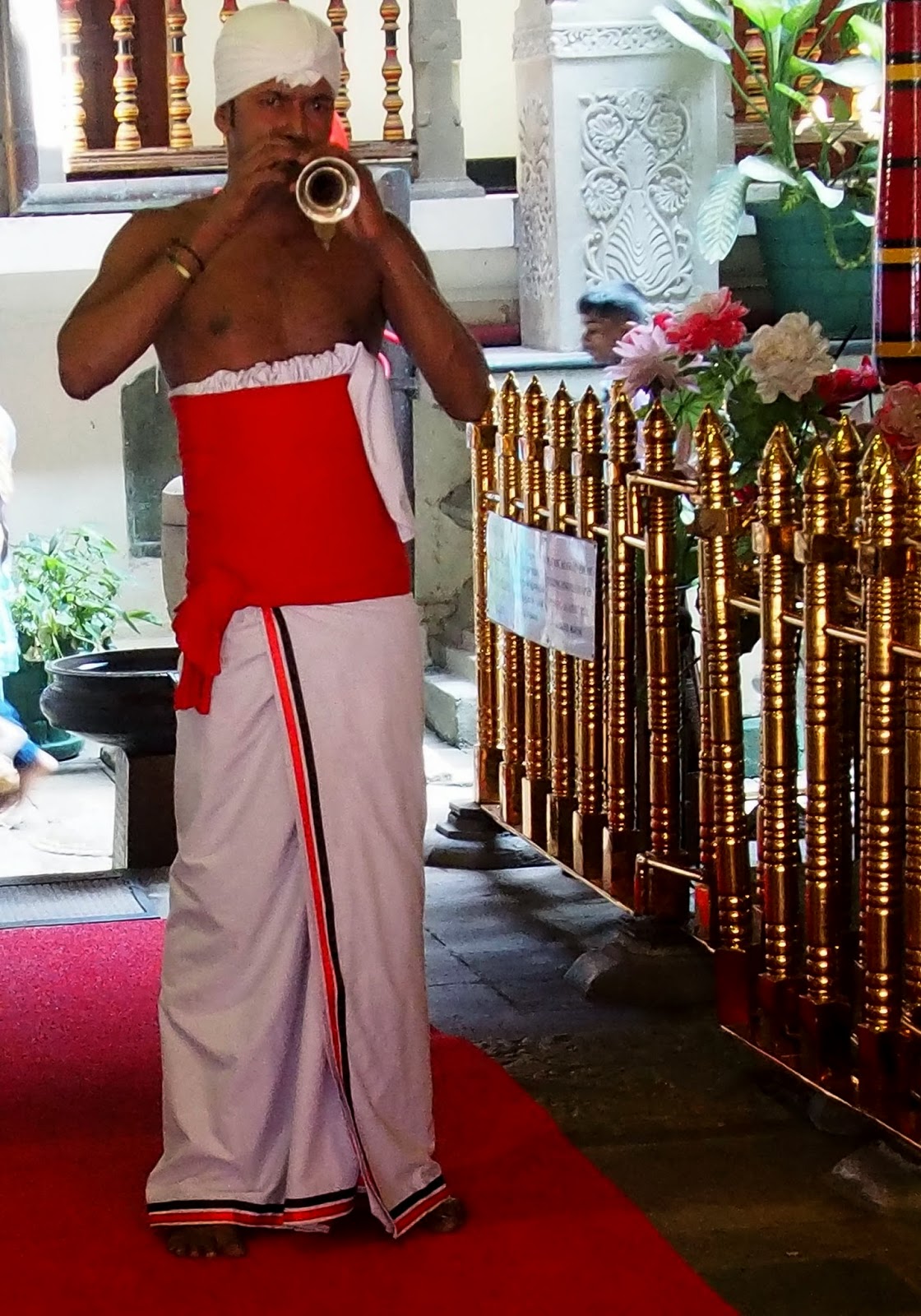 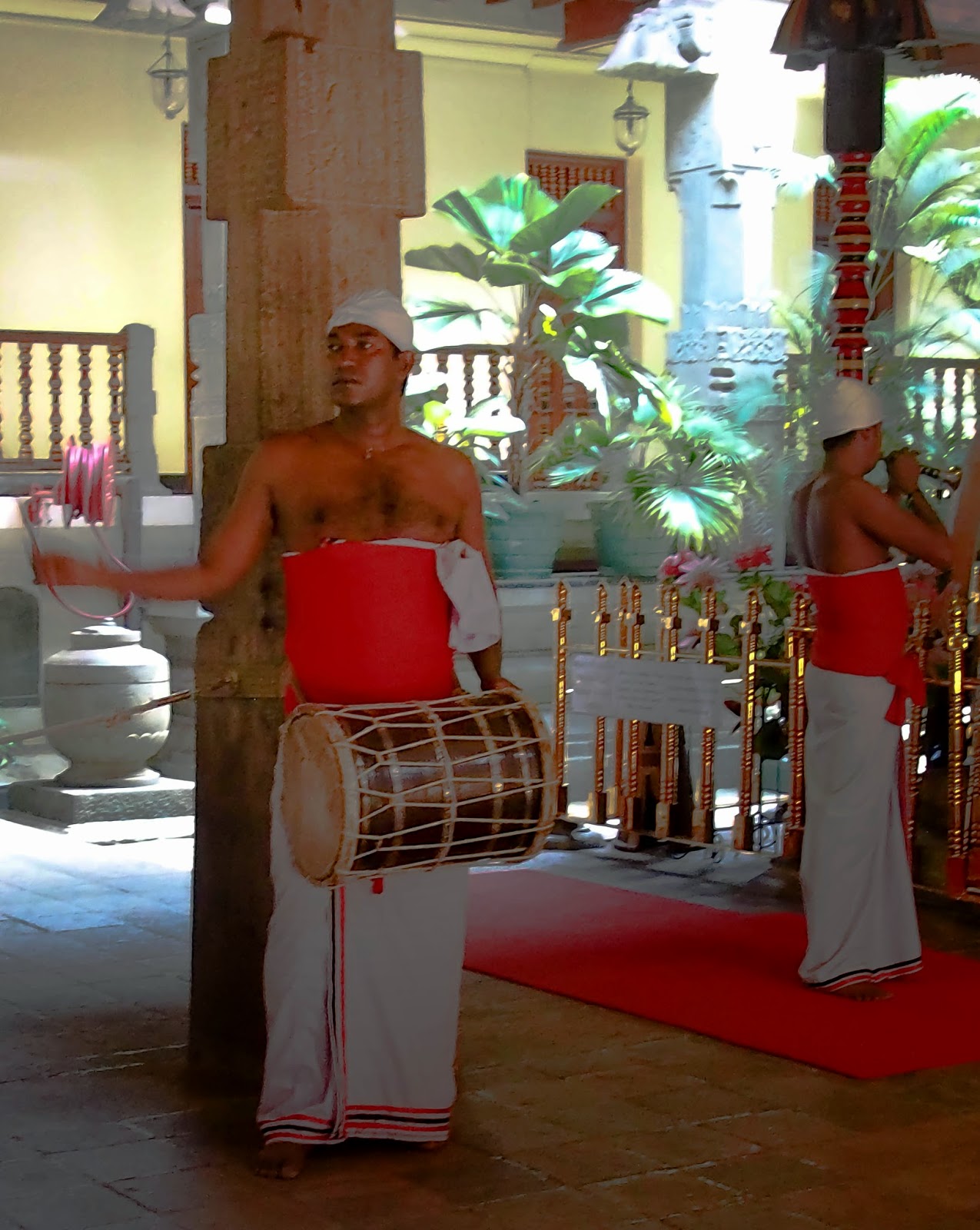 So approximately 45 minutes later we all met up again, the shoes were retrieved, Maggie shot off for an Anglican church she had spotted just outside the grounds.

Sue and I wandered. I wanted to photograph those buildings I had seen on the way in but we were soon rounded up by the driver. We had to get on the road for the return trip! What happened to having all day? It looked like the driver too had somewhere else he needed to be. 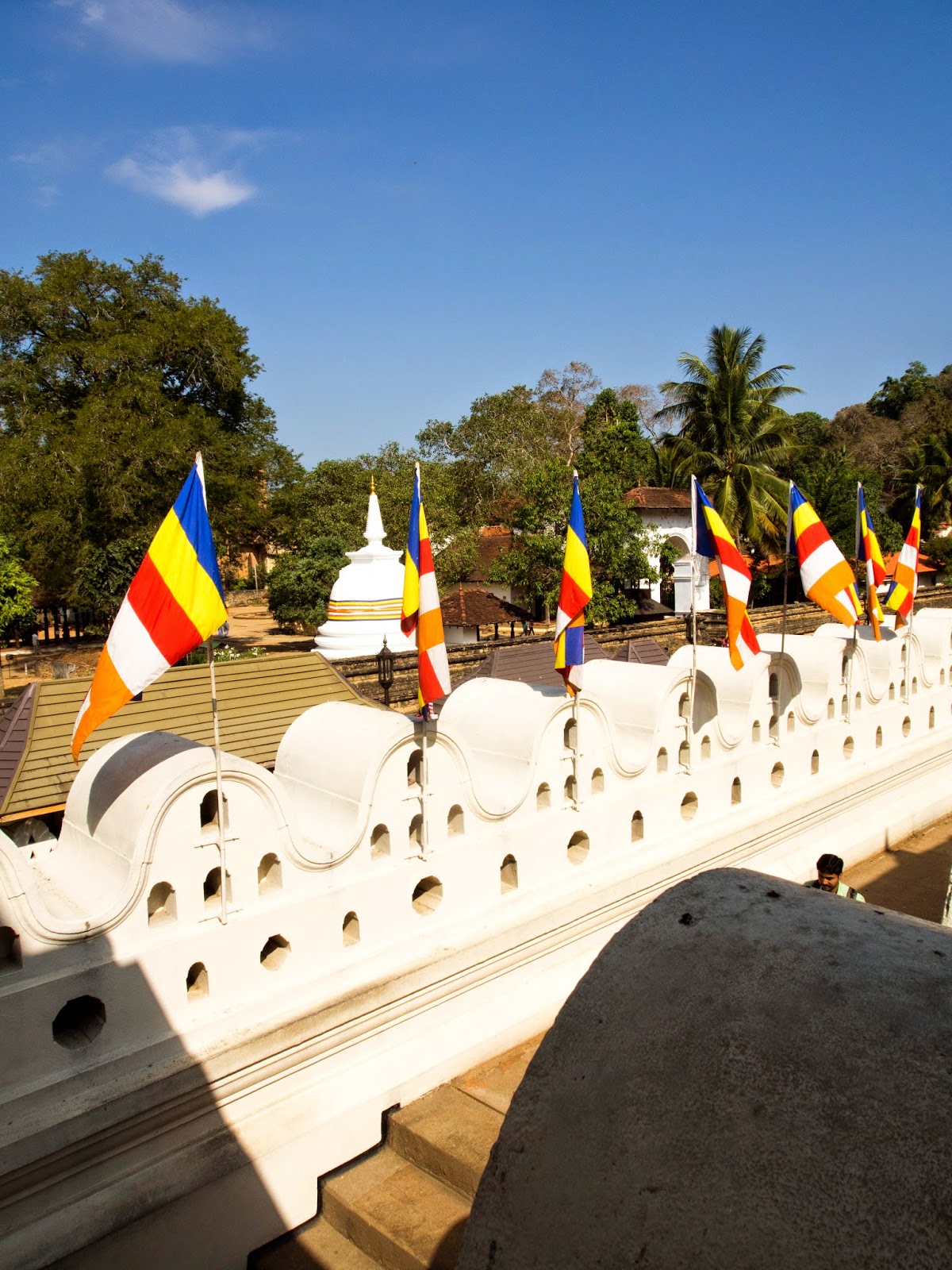 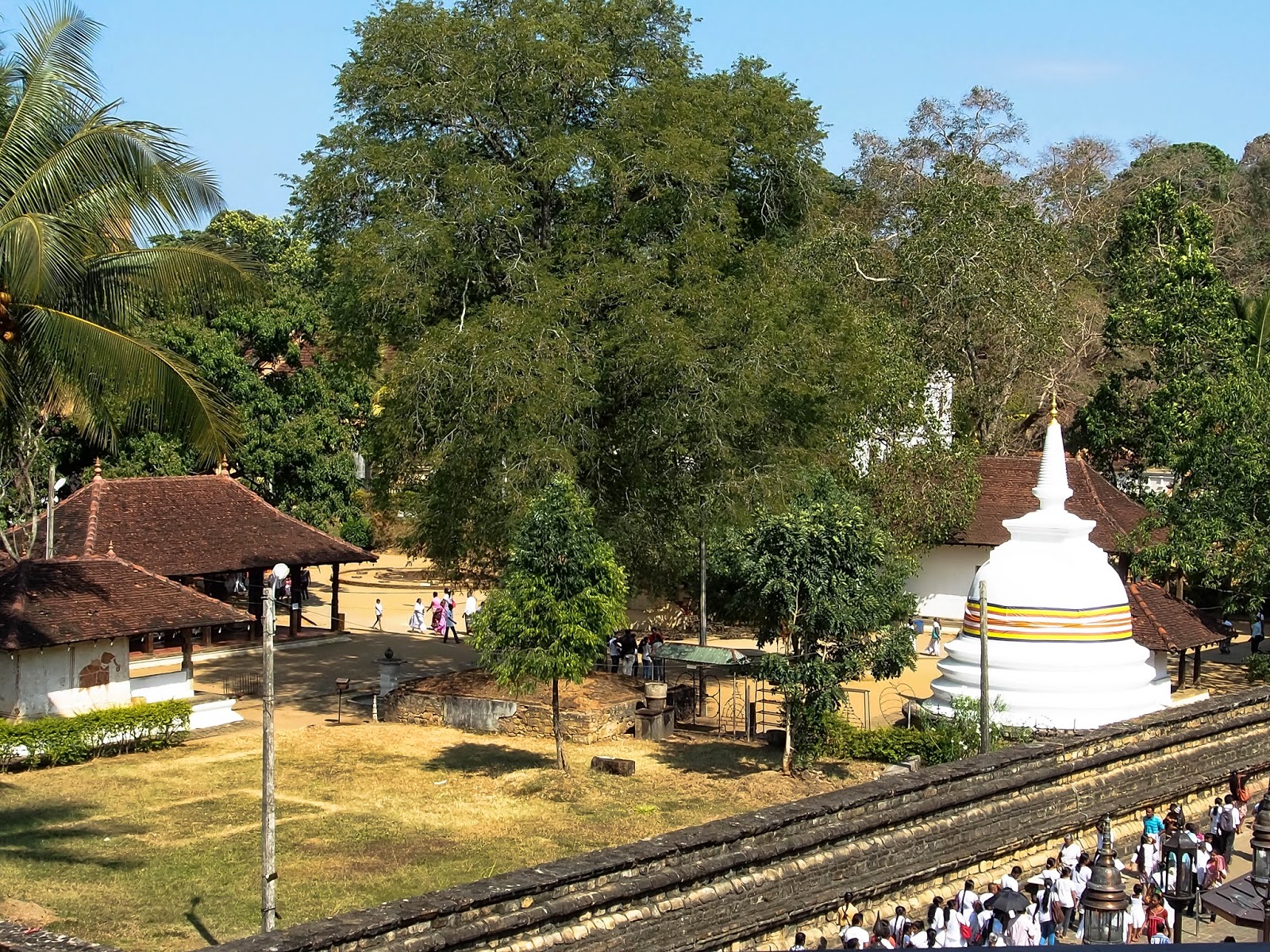 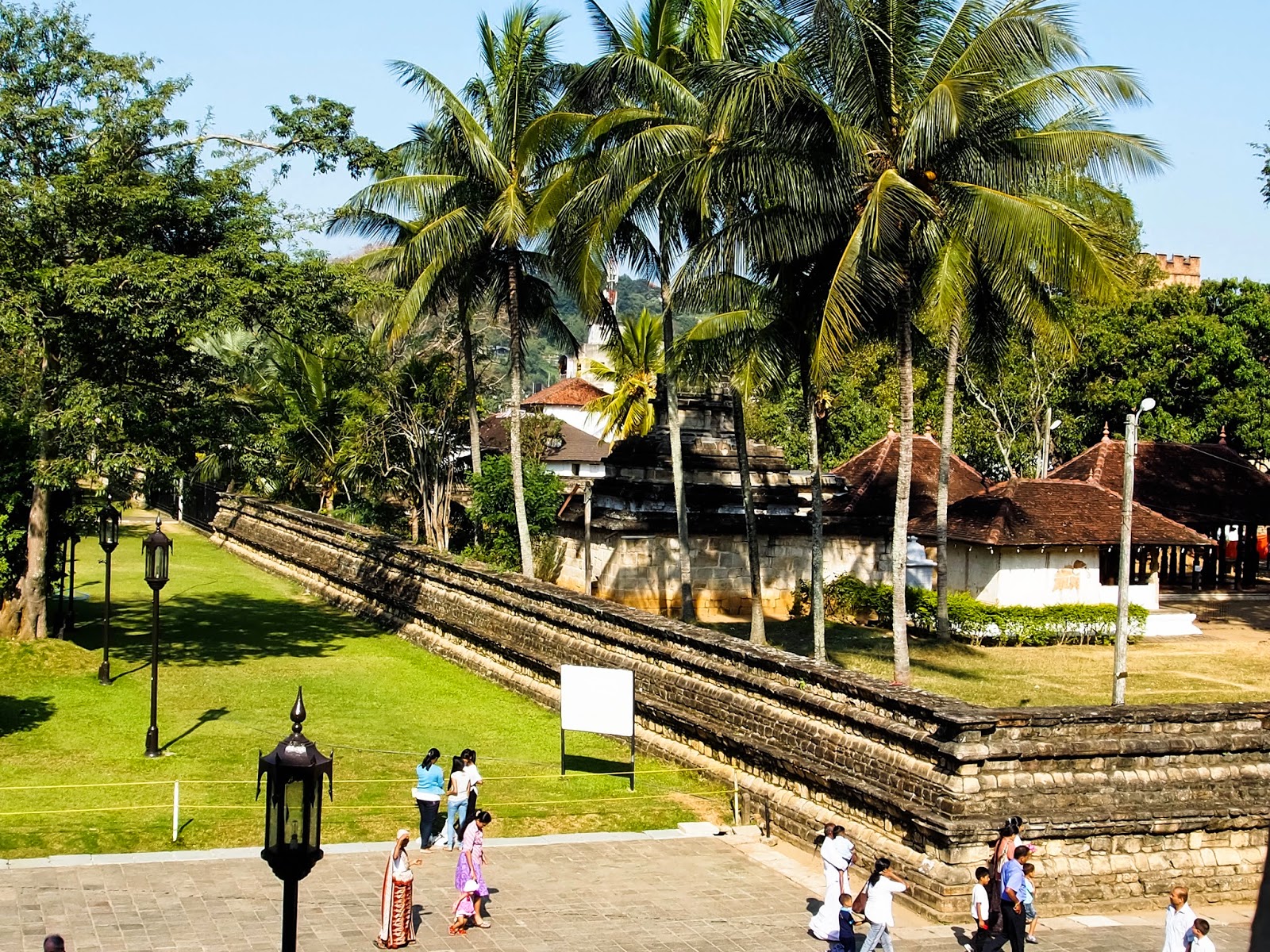 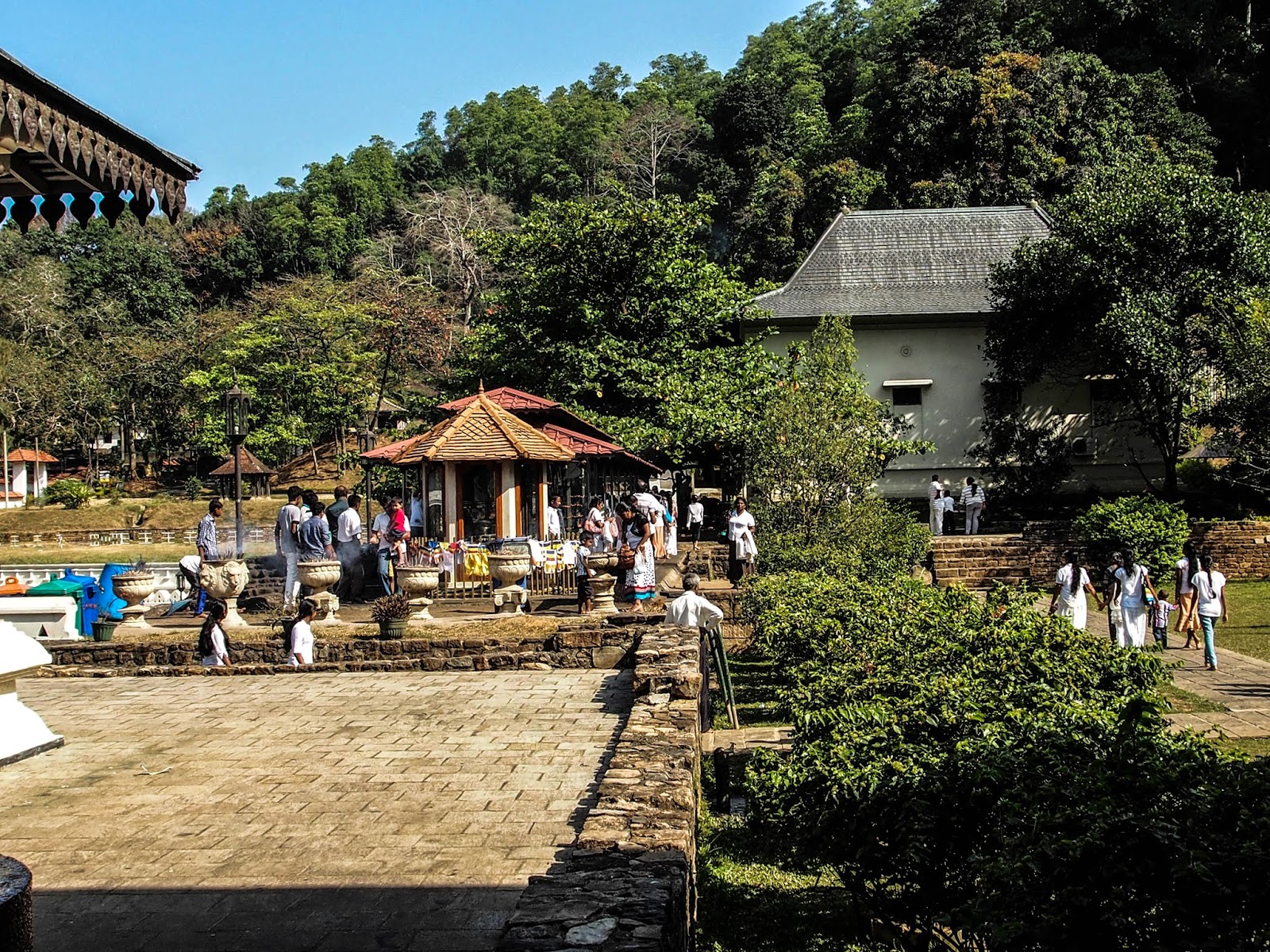 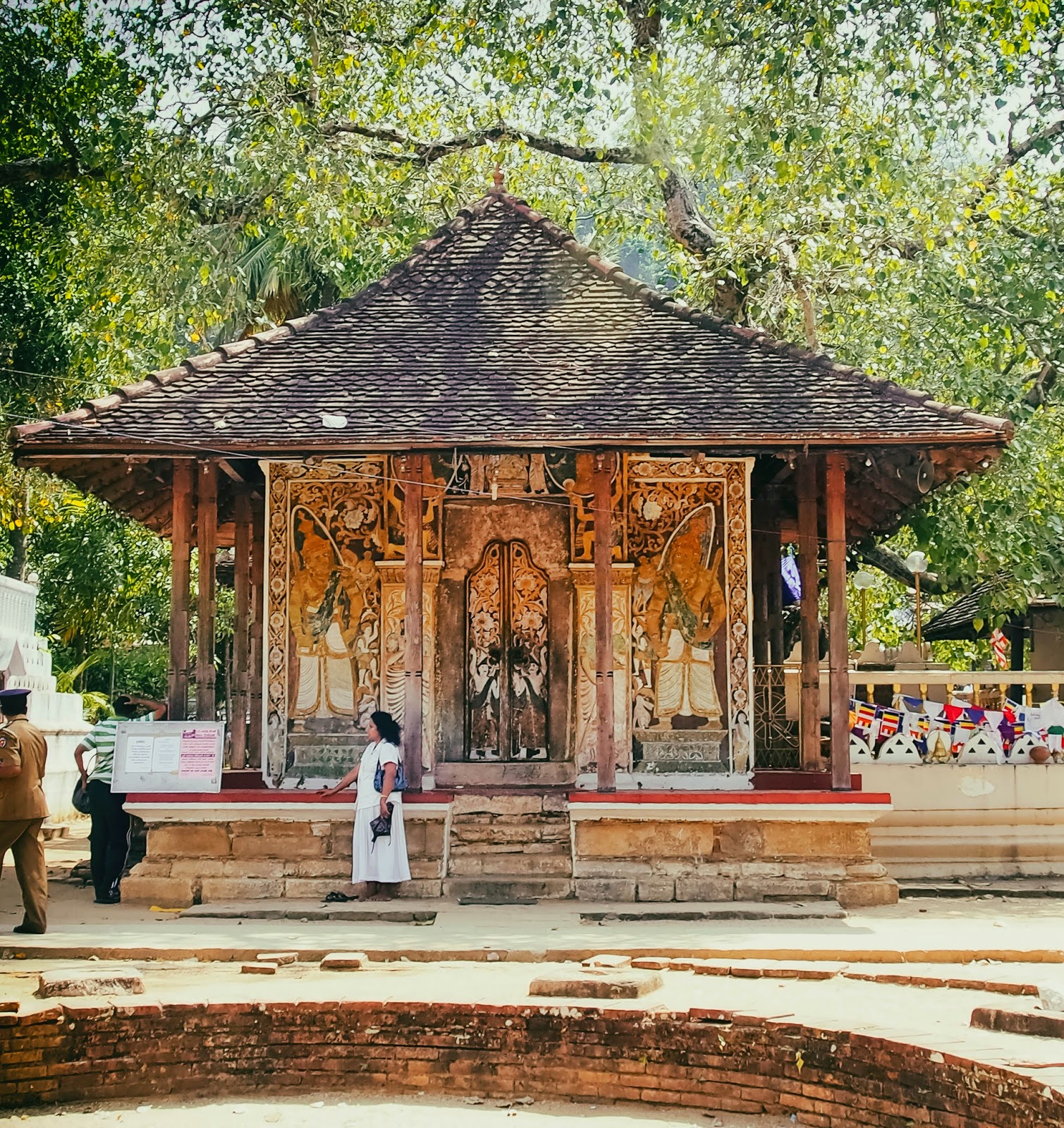 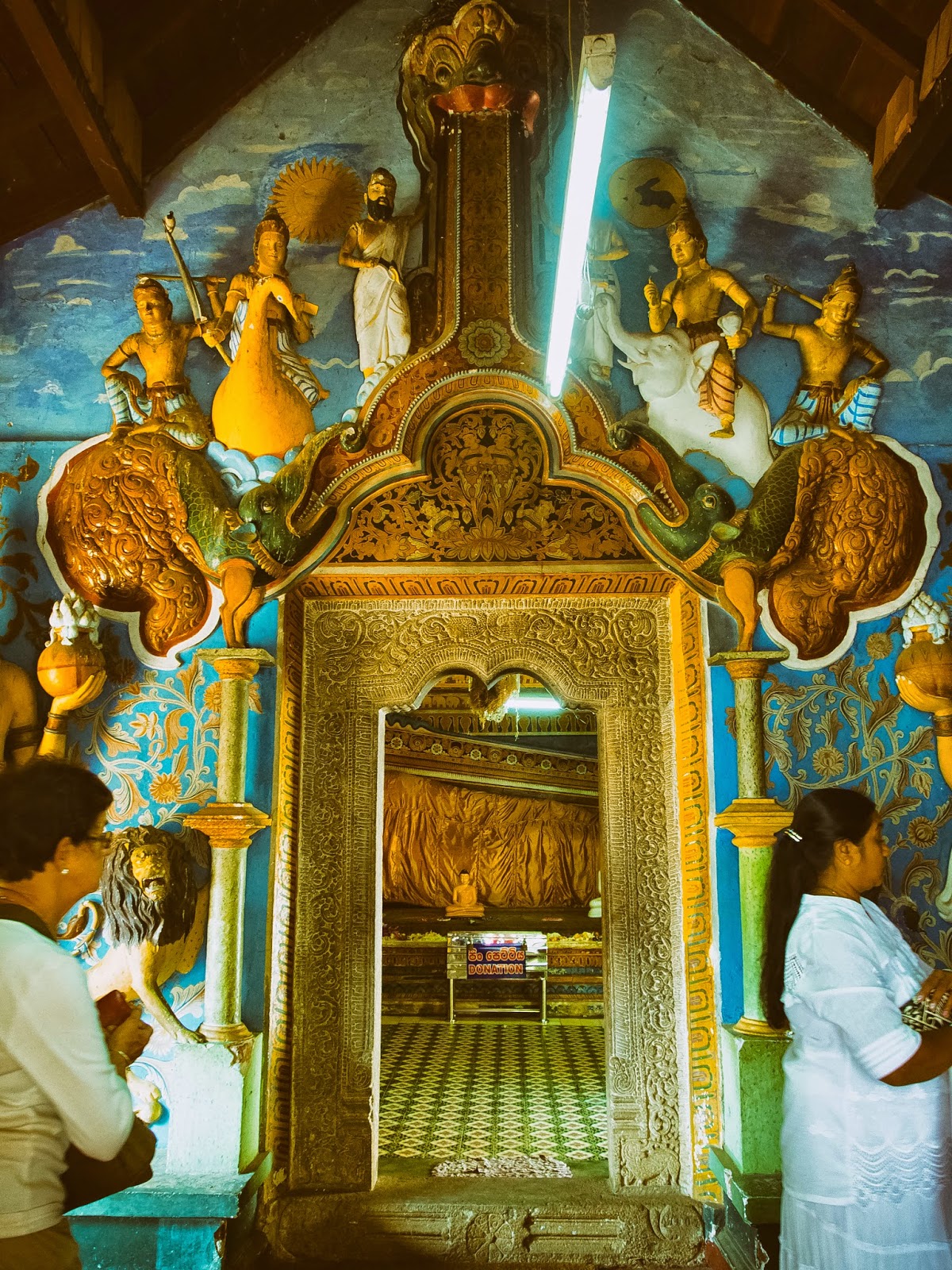 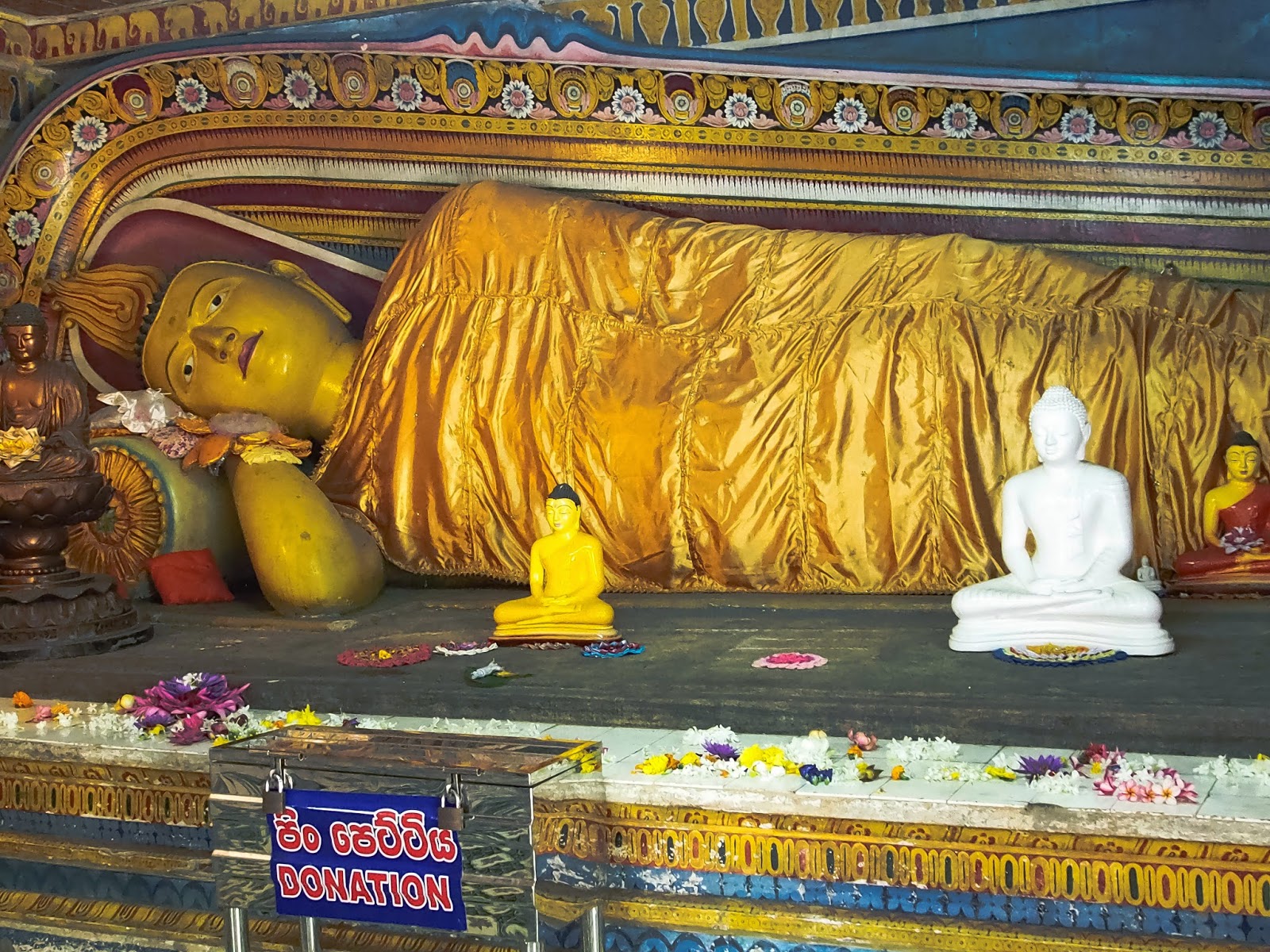 Once we were back in the van, the mystery of the our guides huff was quickly revealed It turned out that Saga had not paid the guide. We had understood it was included. The guide had been looking for his fee for his tour. We had not understood. He did not explain, the driver had not told us. Our entrance to the Botanic Garden had been paid so we assumed when we were told a guide was waiting for us it was the same thing. Our guide, failing to "extract" money from us had gone to the driver, who paid him. We in turn reimbursed the driver. What a mix up.

Once more our return journey was 5½ hours and this time the driver planned on non-stop. We hadn't eaten since 07.30 and had been rushing around the place like lunatics..  Eventually we managed to persuade him we needed to stop for lunch. He found a restaurant, we took one look, decided hunger pangs were better than food poisoning and moved on. We were back on the road. An hour later he stopped at a tea house and said this was all that was open on a Sunday. So it was a cup of coffee, there was no food. It was a long uncomfortable journey after a very frustrating morning.We were glad to reach our hotel, collect our bags and  move into our new rooms.

What a waste of a weekend, we spent all our time on the road, approximately 11 hours for 2 hours sightseeing. I decided no more trying to please others.I had passed on the elephant farm, tried to mediate between Maggie and Sue at the temple. Enough! I have not been to Sri Lanka before or will I be touring again after volunteering. Saga might have organised my hotel for the next weekend but I will make my own travel plans and actually see what I would like to see.

Being nice is overrated!

Or maybe I should take the advice of all Buddhas? 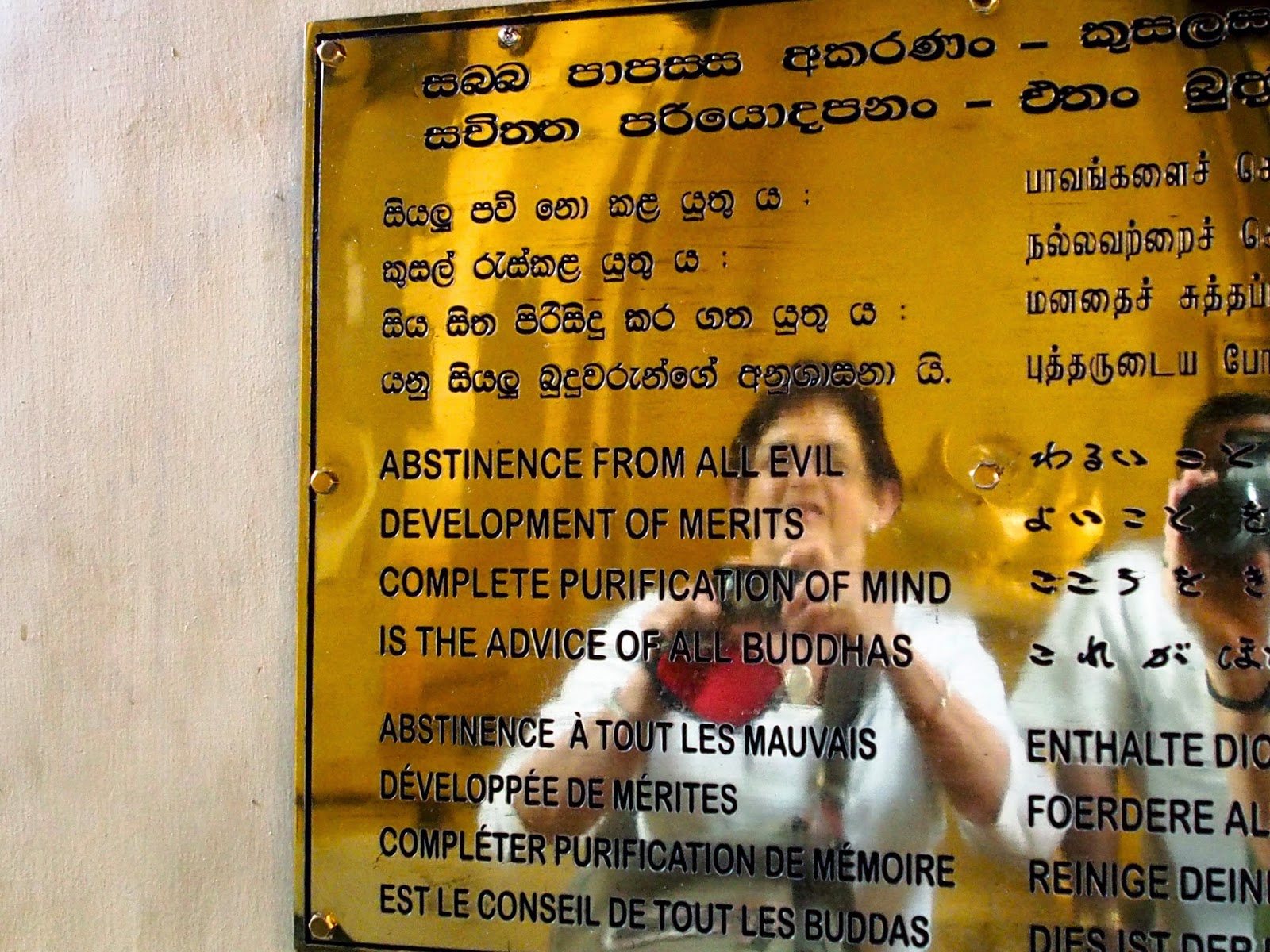 Posted by Maryhocam at 9:41 AM