Firstly I would like to thank Mackenzie and Janine for choosing me as their  featured writer last week. I was surprised and very pleased. Next I must apologise as my Friday reflection has become a Tuesday one.

Last week was a good but very busy. The H3A group here on the Bodrum peninsula was celebrating their 5th Year Anniversary last Thursday and I was busy sewing my  hexis together to put on display. I also had several photos in the photography exhibition. I received many compliments for both the hexis and the photographs.


Whilst there, I also had the chance to work on tomorrows photo homework, "Shadows" The evening light reflecting on the dome of the hamam was too good an opportunity to resist for the Irish contingent.

Unknown to us we were caught in the act by another member of the group who is a very well respected blogger. She lived in Bodrum for a number of years, in the early 80's, and returned again in 2012 to a very changed scene. Back to Bodrum

However it was back to earth, literally, the following day as I struggled to move a truck load of earth. I am making a new vegetable garden. This left little time for blogging and even less energy.


So my reflection this week is of lessons learned.

I was talking to a young friend a while ago. He hadn't long set out on a his teaching career. He had just got engaged and life was stretching out in front of him, full of  excitement and promise.

I on the other hand was just about to retire, My life too was in a period of change and for me also full of excitement and promise. As we were talked, I passed a comment about me being lazy. He said he couldn't believe that. As our chat went on I told him I wouldn't want to be young again for all the tea in China. He was astonished, Why ever not? Youth was everything. I replied that I would not want to start from the beginning again and have to learn all of life's lessons again. He then jokingly agreed that my initial statement was correct and that I was indeed lazy.

From the time we are born we begin to learn and these "life" lessons continue until we die. The question is, do we learn or do we repeat the same mistakes over and over again?

When I was teaching, the main message I used to try to pass on to my pupils was, never be afraid to try. It is from our mistakes that we learn more. I think this true for anything. For example, in a photography workshop you submit two photographs, one really good and the other not so. When people look at the first, they say wonderful photo, it may have been just a lucky shot . Looking at the other photo, if you are lucky people may say, you needed to have changed your aperture, ISO, crop it differently etc. It is from this we learn. If we are open to making mistakes to not being afraid to try then we can make our greatest discoveries. How many of us sat in a classroom afraid to raise our hand when the teacher asked a question and then kicked ourselves when someone else gave the answer that we would have given and received all the praise?

But I digress. There are so many lessons I have learned and so many still to be learned. While the above lesson is a very important one, the most important for me has been to "seize the day." Carpe Diem.

I had my children shortly after I married, at what is now considered a young age. By 25 I had three babies under 15 months - I hadn't counted on availing of the "buy one, get one free" offer!  My plan was to have a relatively large family, to have them young and then later enjoy an early retirement, the children would be grown up and independent, if not gone; and then it would be my turn! No empty nest syndrome for me. All plans for the future, I was going to wait 35 years for my day to come,

But then life happened. I worked in a small school. We were a staff of four. My Principal's wife died in her forties, of cancer. My close colleague was in a horrific car accident, with her husband. They turned a corner and a racing jeep, on the wrong side of the road crashed straight into them. They were not sure if she would survive. Then they thought they would have to amputate her foot. Luckily she came through and intact. Then my third colleague lost her husband to brain cancer. Again he was in his forties.

I got a call one day to say my husband had had a "turn" and was in the cardiac care unit of the local hospital. I said I would be straight down. I was told not to move as his boss was on his way to collect me. I was sure he was dead or dying, if not why couldn't I drive myself? Luckily it was not a heart attack. He was sent home the next day and told to watch his diet. A bad attack of gastritis combined with taking bloods had knocked him out for the count.

This all had a profound effect on me. What were the odds that two of a staff of four would lose their spouses at a young age? That another would be in a life threatening accident.  Tomorrow was not guaranteed. Life, with all it's ups and downs, was sweet and to be enjoyed now. It was time to live in the moment, to seize the day, carpe diem.

I stopped procrastinating and started to make my dreams come true. I began to "make hay while the sun shines" if the weather was good, I would go out for the day. The housework could wait until the  evening  or the next rainy day.I started to live and enjoy the moments, when holidays weren't possible, a day out here and there. Money saved for a holiday abroad became a deposit on a mobile home by the sea. Later,as time went on, this was exchanged for a holiday home in the sun.   Each stage of the children's lives was to be enjoyed, tucking them in at night and reading them their favourite bedtime story. Taking them and their friends out for a picnic by the sea, the excitement as they headed out to a local disco with their friends, waving them off to college, attending their graduations, sitting down at the table with four wonderful young women and listening to them talk.

I became proactive in my own life. I was never one to look backwards. When I met a setback, I would head for a corner and either have a good cry or a good rant and then emerge with a new plan. My problem was I was always looking to the distant future.  While I still tend to make plans for the future I now find it hard to tell you what I will be doing next week. I let life unfold.

I have been lucky that as I imagined, I took early retirement.I am now living abroad, in Turkey.  What was a holiday home has become my real home. Somethings are not as I dreamed,some are better,  life goes on. When asked will I live here for the rest of my life I say I don't know, I no longer think in terms of where I will be, what will I be doing in five years time? I don't know. For now I enjoy the view from my bedroom window each morning I wake up. I consider myself lucky.

And I do not worry. I believe we are authors of our own fate. Yes it is true, sometimes we have no control over things that happen. But we do control how we react to them.  I believe that if we seize the moment, then we live our lives fully, the bad as well as the good. So much time was wasted dreaming of tomorrow. Now, even if I dream for tomorrow, I enjoy the day that I have and try to live it so that as night falls I can say, that was a good day. 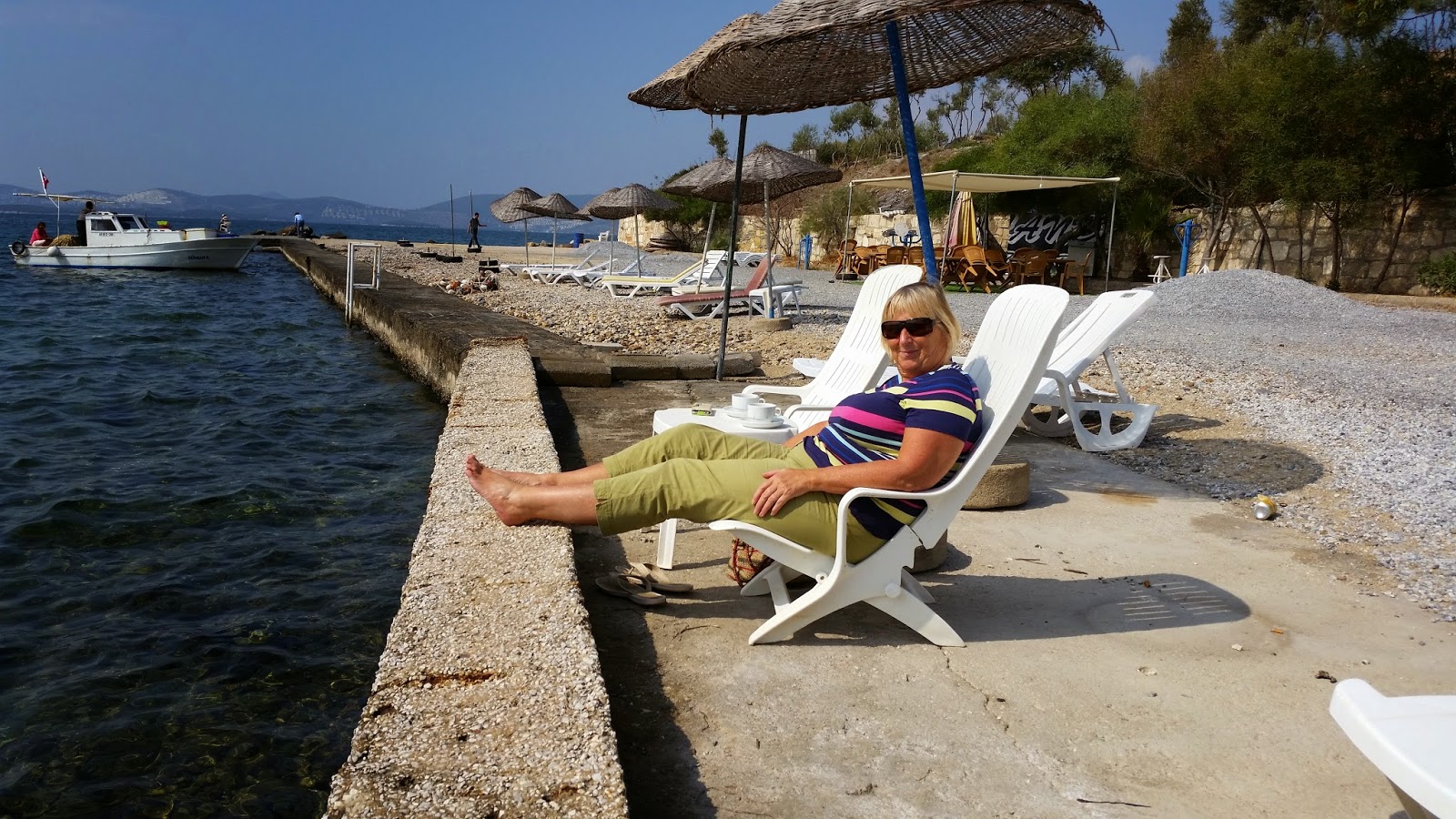 Posted by Maryhocam at 9:02 PM