I had a somewhat eventful return journey to Bodrum.  To paraphrase John Denver, my bags were packed and I was ready to leave. But messages were pouring in from friends saying they hoped my flight was not cancelled. Istanbul was experiencing major snow storms. 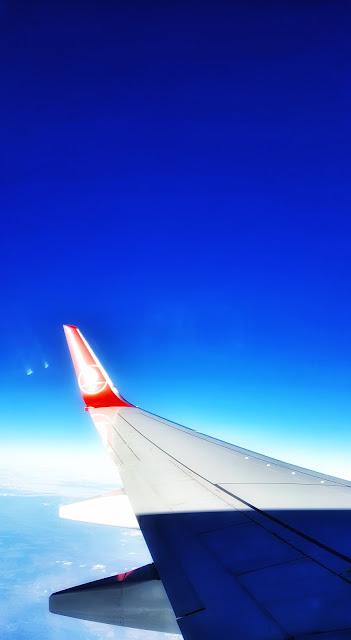 On Saturday afternoon, I went back to Tomsollagh,  the family home. My daughter was to drop me to the bus at 05.45 the next morning. Holding my breath, I logged on to the Turkish airlines site to check in online. Several flights had been cancelled. But all went to plan. I chose my seat carefully.  If you don't want the pasta dinner you need to sit near the front or the rear. The food service starts there. Usually if you are in row 16 or 17, the chicken or meatballs have run out by the time they get to you. The pasta is the only dinner they serve that is not good, in my opinion.


The messages from friends continued. Should I be worried? They seemed anxious I should leave? I was I quick to reassure them. "No problem, I checked in an hour ago, all is good! When I am ever going to learn?  Complacency is my downfall!  6 pm and the dreaded message arrived, my flight was cancelled.  At least I wasn't stuck in the airport. It was Saturday evening and the Irish sales office was closed, but the message told me I could change my booking online. I tried that, I got a message on the website telling me I needed to ring the sales office.  I tried ringing the customer service number in Istanbul line. After 20 minutes holding I guessed the line was so  jammed there was not a hope of getting through and it would be cheaper to book a new flight than hold the line any longer.

Daughter informed, I decided to leave my suitcases in Tomsollagh  - there was no way I was hauling them back up the stairs to my bedsit -  and return to my "bijou residence.  I placed my contraband back in the fridge -My suitcase was full of cheese and bacon - and went back to Wexford. The internet is better there, I would have a better chance of re-booking my flight. Hard to believe in this day and age, but the internet speed in Tomsollagh often doesn't exceed 0.2m.

I am one of those people who ignores the health warnings not to bring your phones or iPads to the bedroom. And anyway my bedsit is only one room so there is no avoiding They say that even if you are sleeping the ping of a message or email coming through will disturb your sleep even if it doesn't wake you. Well, that night, unlike many others, the pinging woke me.

It started about 1 am.  Ping, ping, ping. Three emails  back to back and messages to my phone. The first a copy of my ticket, the next reminding me to check in an hour before my domestic flight. None of them said the flight was rescheduled and I was flying. What was going on? Were these just automated messages?  Was the flight actually rescheduled? What should I do? If I ignored them maybe the airline wouldn't honour it's promise to reschedule or refund my flight? Wide awake now, I checked with  the Turkish Airlines website again. No, my flight was still cancelled. But I was uneasy. I was definitely not going to get much sleep now. It was 5 am in Turkey, probably not to many people ringing customer service at this hour. I rang them from Skype  to avoid massive phone bills and after only a 5 minute wait I was through.

My mind was racing. My daughter had gone to a party and I am sure she had stayed out late, knowing she didn't have to be up before the crack of dawn. I would have to go and wake a household to get my suitcases and then ask someone to drop me to the bus, probably all for nothing. Way too much bother and it would mean I would get no sleep. I decided to re-book for Monday. It would still get me back to Bodrum in time for our photography workshop.

Done and dusted. The booking was made for Monday, the afternoon flight . I thanked the customer services rep and finally settled down to sleep. I could have a lazy Sunday, spend time with my mum and get the bus to the airport at a civilized hour the following morning. It worked out well for me. The only reason I hadn't originally booked this flight was it  had been over a €100 dearer than the Sunday flight  Result!
Posted by Maryhocam at 9:25 PM