Why is it the one time you need to be up early you can't sleep. Saturday night was a busy night. Blog post written, I had done the obvious things, camera batteries charged and packed, spare memory card formatted and ready to go. I've got the right change to pay for the balance of the workshop. I've even popped my manual into the bag in case I was lost and had time for a sneaky peak.

Super organised. Oh oh, tripod. Guess what is going to be next on my shopping list! My tripod is too light for my new camera. Mum has one in her attic. Sean was hauled from in front of the TV and asked to climb into her attic. She was away but gave vague directions to where it may be. I followed him up the ladder. I think a sat nav would be necessary to to negotiate the clutter. 15 minutes later tripod located I backed down the ladder. Have I ever mentioned I don't do heights.  A couple of pieces of aluminium strung together with some more flimsy bits doesn't inspire confidence.

On first examination Mum's tripod is definitely heavier than mine. I unscrew the legs, no nice easy flaps on this baby. Figured out how to get the camera secured, it seems steady, I'm all set to go! Okay! Put the camera back in the bag. What? It won't unscrew!! Deep breath, take my time. Do it again. No luck. HUBBIE!!!!! He comes running thinking I'm having a heart attack. Actually probably not too far from the truth. He calmly begins to unscrew the camera but it simply spins on its axis.

But he's a man. He immediately get the vice grips to hold the bottom screw. Ten minutes of what appears to be sumo wrestling he gives me a proud grin and hands me my camera without the tripod.
Won't catch me using that one tomorrow. Where would I find a vice grips and a hubbie to come running.
It has been 9 hours since I drank a cup of coffee but I'm wide awake. I spent some time blog browsing.
The birds are beginning to sing. It is a quarter to five and I have to be up at seven. Murphys  Law.

Seven o'clock came around quickly  and it's p***ing rain.  The sister-in-law arrived to collect me at eight. She's just the kind of sister-in-law that you would love to have. She joined the camera club after me, she now cleans up in club competitions. I don't get a look in edgeways. I brought her to Turkey with me and all my friends thought she was 20 years younger than me. In truth, she is one year younger. I'm going to have to find older, uglier and less talented friends.....in the interest of my mental health.

We arrived at Waterford Castle, the location of our workshop.  It is still spilling rain. The Castle is on a small island and we have to cross by ferry. I rolled down the window and took a photo of the ferry as we waited for the other members of our group to arrive. There was no way I was getting out of the car. Don't think I need worry about "THE CONCERT" There is no way that it can be June 12th. It feels like January 12th. I'm wearing socks for God's sake!  I have just emerged from the shower like Bobby Ewing and the last few months have just been a dream! Nope reality check, it is the 12th of June and I've got to get out of this car and make a run for it. 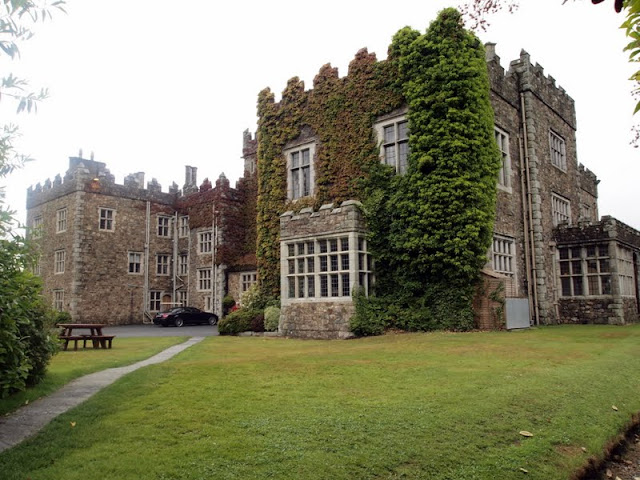 Tony is at the door and directing us to the room where we will be working. I'd murder a cup of coffee. I only had two hours sleep and a caffeine shot would be most welcome. Paddy, the club chairman, directs us to coffee in the reception area.  But Tony turns us back. It's down to work, coffee at eleven:-(((((((

Two models are getting their hair and make up done. The room is full of serious looking equipment! Lighting and reflectors of every kind. We hear of Rembrandt lighting , Butterfly lighting and Beauty lighting. I'm not a Celebrity, how will I get out of here????

This was bad enough but then there was a lot of talking about metering, if this stop is that and that stop is this you need to do X! Somebody throw me a life buoy, I'm drowning. I'd made a particular point of asking was this workshop suitable for beginners. Even a look at the strong sturdy tripods, let alone the serious cameras tells me there is very few at the same level that I am. Thank God for the sister-in-law. She is doing a lot of eye rolling beside me while frantically scribbling notes. Guess who forgot pen and paper? That's right, miss super organised herself!!

The door opens and the tea and coffee arrive, but it is not to be. Tony is enlightening us on feathering the lighting. We're never going to have all this equipment. Or are we? It turns out the club has a lot of these lights and we are welcome or even entitled to borrow them. Move over David Bailey, I'm after your job.


Interesting tip. If photographing someone with a double chin, ask them to touch the top of their palate with their tongue and gently push the tongue up...the head automatically comes up and tilts back, stretching the neck. Bet you're trying this out now as you read. It might be more helpful if I could remember shutter speeds and f/stops.

Thank God, we finally get permission to have our shot of caffeine, but by now I'm considering a shot of something infinitely more stimulating. And this is from one who doesn't drink. The cups are small and the coffee lukewarm. I'm paying for some past sin.

Enter our models. We are broken up into two groups and given a remote trigger for the flash. We are given the readings for shutter and aperture. What the hell is 1/60th of a second. My camera doesn't say 1/60th. Doh it's plain 60. Only stupid question is the one that you don't ask. 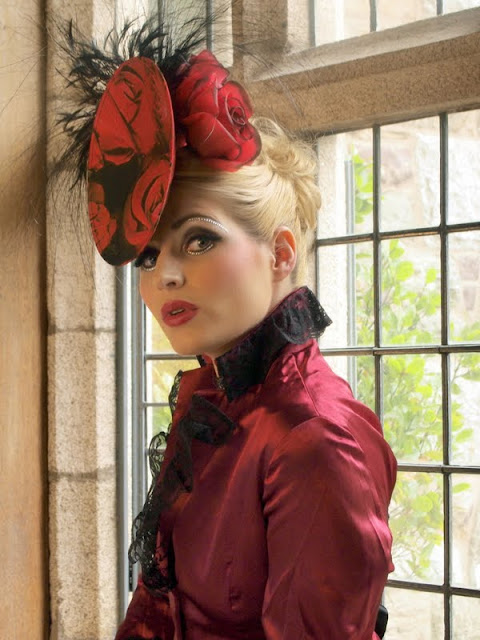 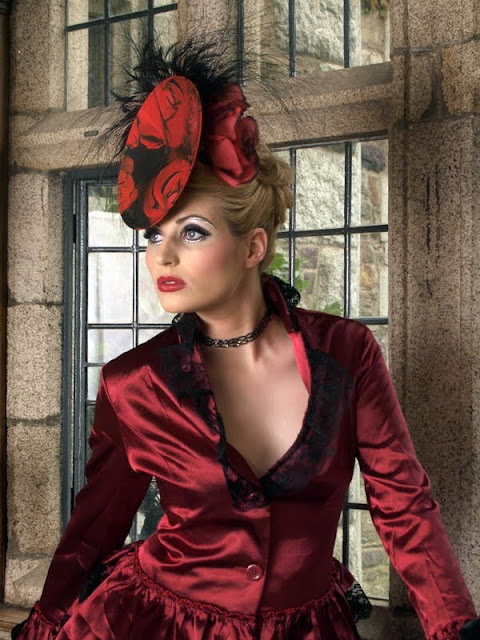 What followed next was a couple of hours shooting the models. I was so nervous the first time. It is nerve racking when you are being told to talk to and pose your model when all you're trying to do is to focus the damn camera! 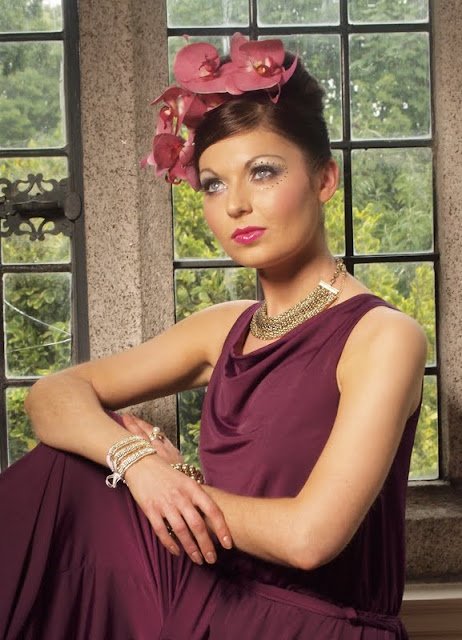 We broke for a light lunch.....we paid €10 for the privilege. I won't be coming here to eat too often. We had another cup of tea or coffee and 2 small triangles of salad sandwiches. I'd hate to be paying for dinner. I went to the ladies rest room. Wow, I've no camera, I run back to get it. The toilets are very unusual. I have to photograph them. I know that I'm not a portrait photographer. Landscape or the unusual catch my eye. These are not the most technically correct, shots I've taken. I got lazy after the earlier work and put my camera on Auto. 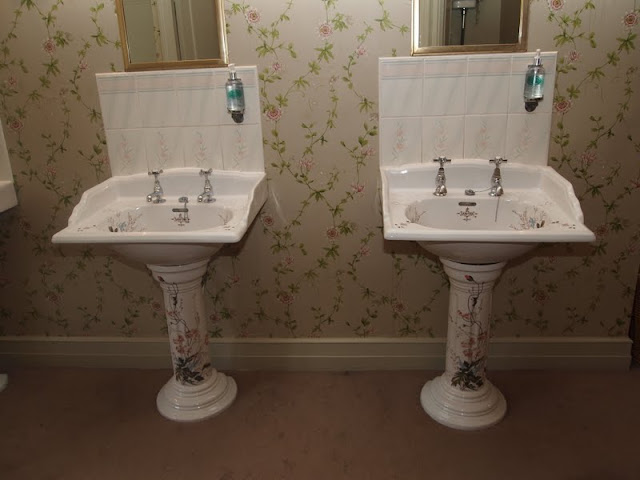 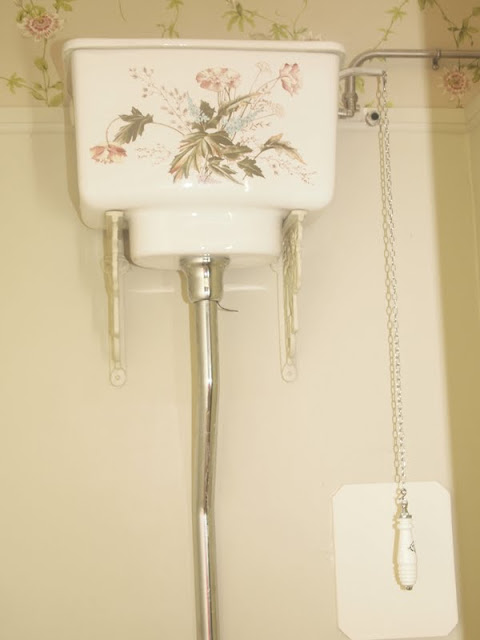 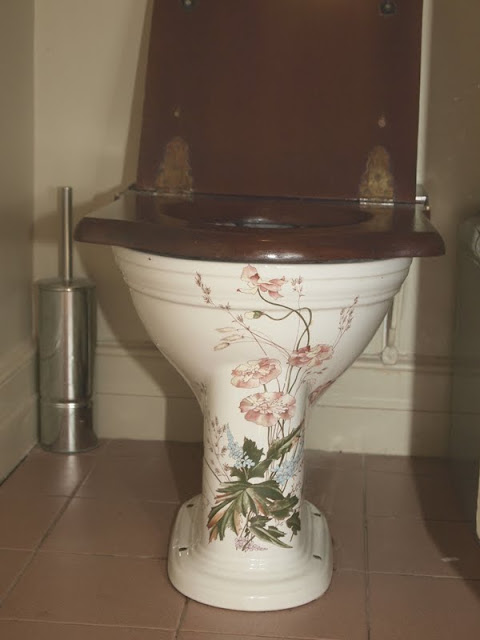 After lunch, our models reappeared wearing a change of costume. Poppy was wearing a Philip Treacy hat This time I'm not as scared  and wonders of wonders, I've learned the shortcuts for changing my aperture, shutter speed, ISO and white balance. I learned hot to reduce the flare from the window when shooting in natural light. Waiting to take my turn Tony asked to see the photos I'd taken earlier. Imagine my blushes when I turn the dial. Who else has photographs of toilets when there are two very beautiful models just waiting to be "shot" 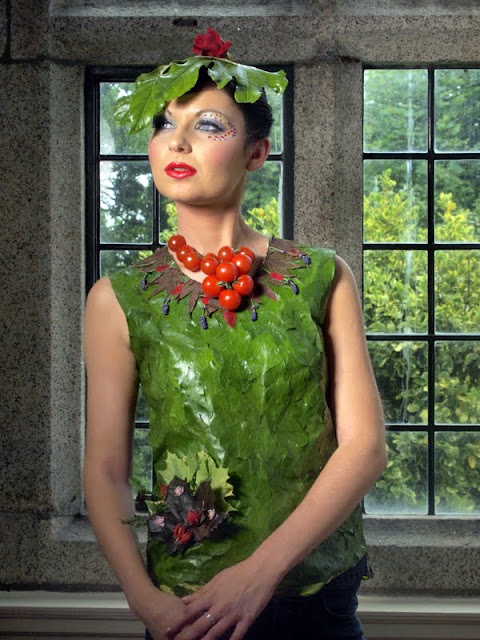 The workshop finished about 4.30. I'm brain dead but feeling a lot happier than I did at 10.30. Looking back I didn't get great photos, but I learned to handle my camera and my fear. I've uploaded the best of my shots here and of course the ones of the bathroom.
Posted by Maryhocam at 8:18 AM