Lofoten and the Midnight Sun

On arrival into Bodo, we took a taxi to the airport. I had read that it was in walking distance, just 3km, but even though my bum was numb, I didn’t fancy pulling my suitcase that distance.

Bodo is a small airport. We checked in and went to get something to eat. We had the nicest airport food I have had anywhere. I had an open prawn sandwich. Hubbie had a roll filled with ham, cheese and salad. I also had fresh strawberries and orange juice. Hubbie stuck to the coffee. Emdee and Jaydee had bowls of salad. You could pick and choose whatever you wanted from the salad bar. The surprising thing is that by Norwegian standards the food was good value. Hubbie and I paid about €30 for our meal.

Later I decided to have a coffee and a cake. I went up to the counter and saw an absolutely sinful chocolate square. It was like chocolate fudge cake with caramel. I wasn’t sure if the plane would get off the ground if I indulged. I decided to risk it.  Here was the kicker, €13 for 2 coffees and a piece of cake! But, believe me, that chocolate cake was worth every cent, I mean Krone. 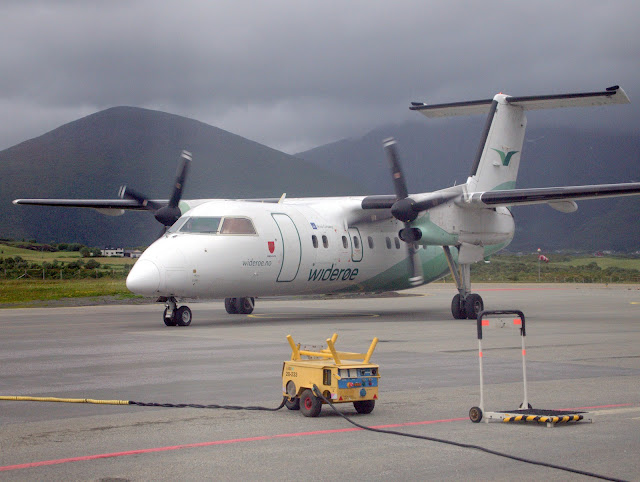 We boarded our small plane. It was only a twenty minute flight, it would have been 31/2 hours by ferry. Hubbie would never have survived that. He can't look at a boat without getting seasick! As usual he was a gentleman and allowed me to have the window seat, right in front of the propeller. I had a great view of the islands as we approached. They looked mystical rising out of the mist. 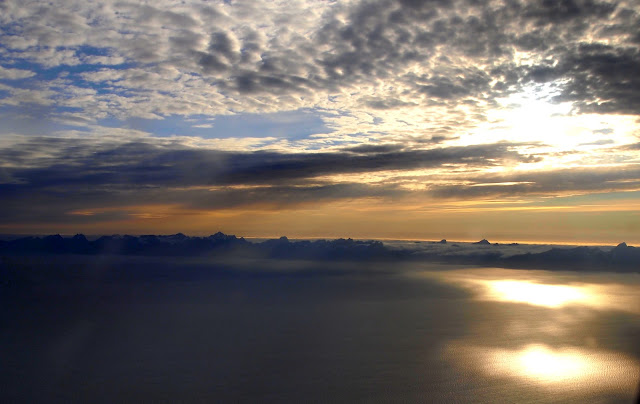 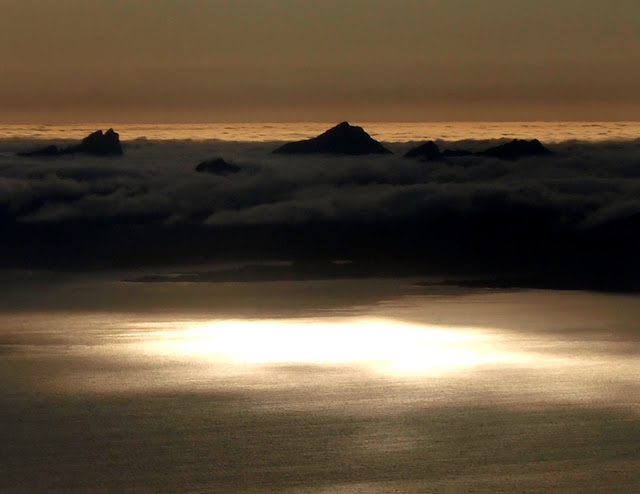 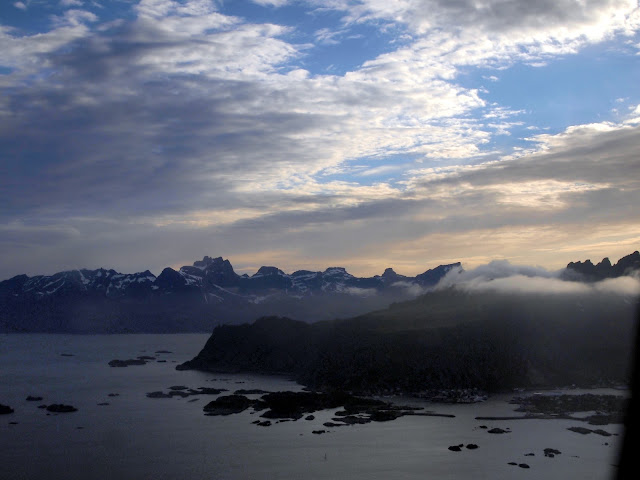 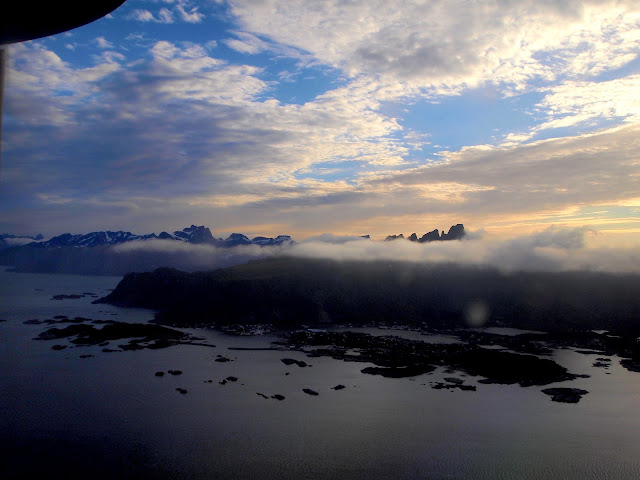 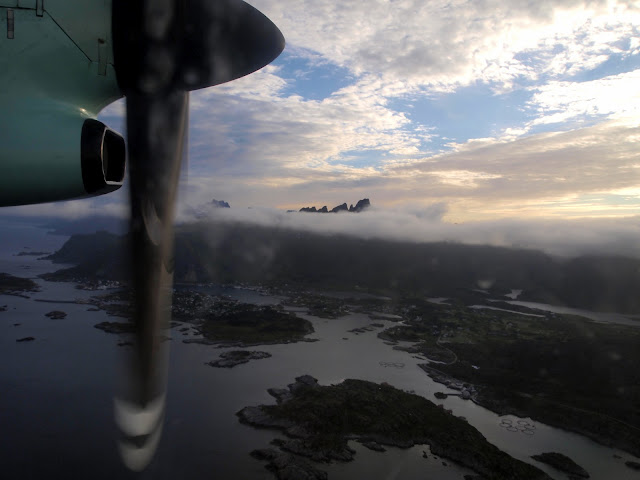 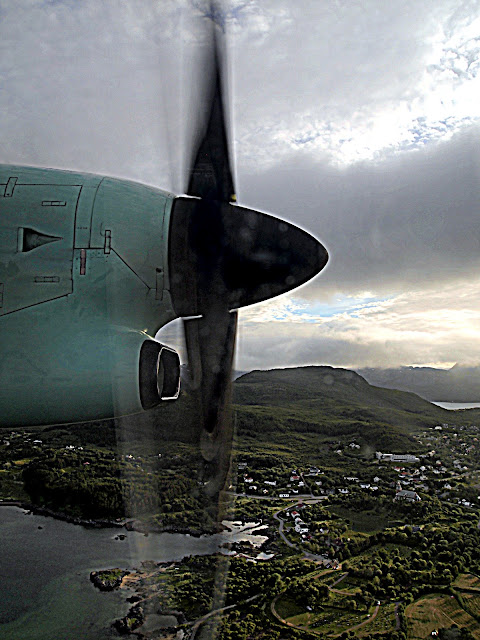 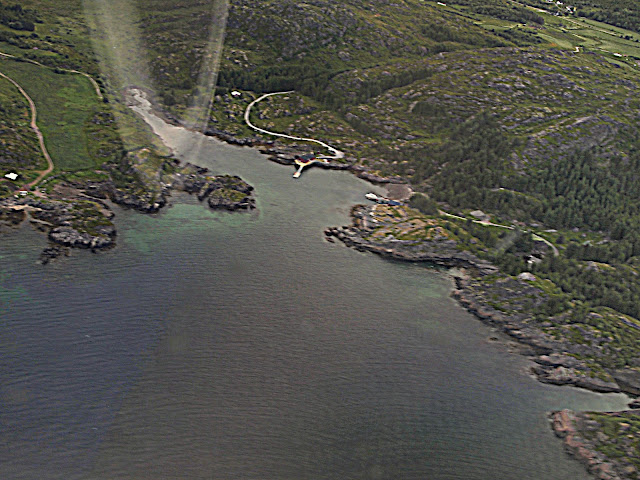 Landing safely, we felt a few squibs of rain. It seemed to follow us everywhere. The weather forecast was good and we had hoped for some sunny if cool weather.

We collected our bags, the airport was tiny, there was just the one small luggage belt and went out the front to pick up our hire car. Eirik met us as promised and sorted out the formalities. The formalities? There were very few. He just wanted to see the driving licences of anyone who was going to drive. All four of us could drive if we wished. There were no credit cards required. I just had to sign a form as the hiree  and we were tp bring it back with a full tank of petrol.

We found the E10 and set out for Sorvagen. The scenery was mind-blowing. I would have loved to stop the car in a couple of places as the sunlight – it was now 10 o’clock at night – poured through gaps in the mountain peaks. However, it had been a long day and my companions were tired. If we stopped everytime I wanted to take a photo we would never reach our destination.

Eventually we arrived and Elin came to show us to the house we had rented. I’ll have to say, our faces dropped. The grass was knee high, there was a couple of wooden planks  instead of a step and the outside could certainly have done with a coat of paint. Inside it was similar. I was reminded a little of student accommodation. I thought of the page in my folder, of the beautiful little wooden white house I had rented and had to wonder if this was the same place. However, the views were magnificent -though the windows could do with a wash. Emdee was a bit overcome, tired after the long trip. The bedrooms were what left most to be desired. The second "double room" had a family bed, a double bunk bed on the bottom a single on top. The third was 2 separate single beds.  We wanted to pay by credit card, Elin had several Rorbu and houses to let but she told us this house was privately owned and she wanted cash payment. We did not have enough cash on us so we said we would pay the next day. As it turns out we paid the evening before we left. We were not approached for the money, it seems like we must have had honest faces. We were trusted not to do a runner!

Leaving Emdee and Jaydee to settle in, Hubbie and I went out for a walk. It was still bright, even though now it was approaching midnight. What a beautiful place we had come to, it was a small working fishing village. I was looking forward to roaming with my camera. On our return, Hubbie  went to bed. I sat for a while to sort out my photos. I needed to save them to my external hard drive and delete them from my memory card. By the look of things, I was going to need a lot of space over the next few days. We had arrived in a photographers paradise.


I watched the sun dip behind the Lofoten Wall, then rise again in the East. It was so beautiful. 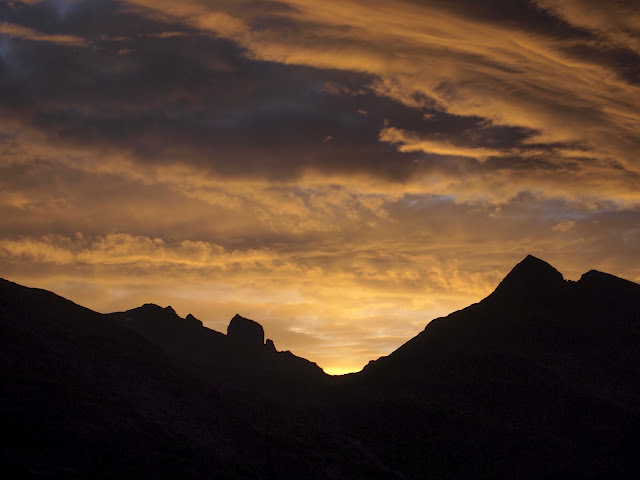 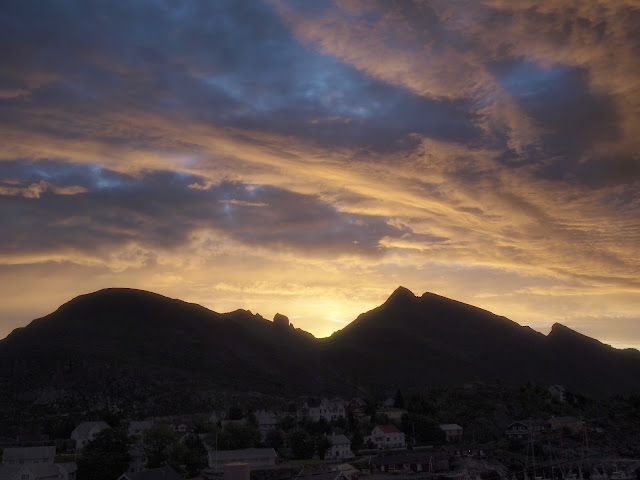 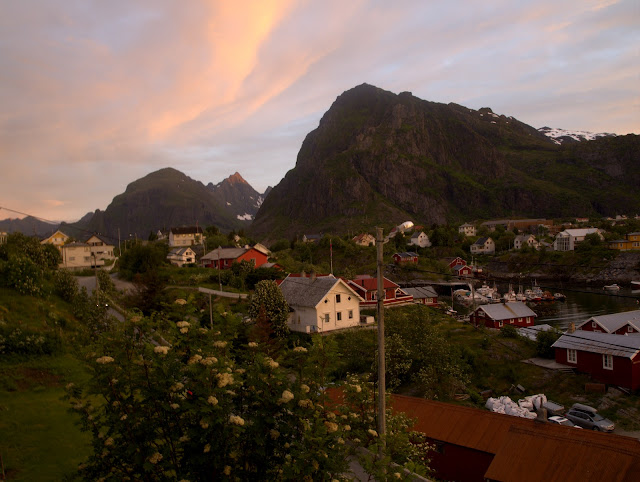 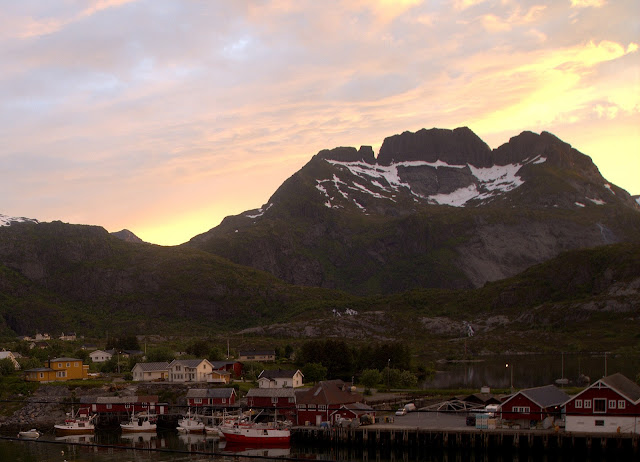 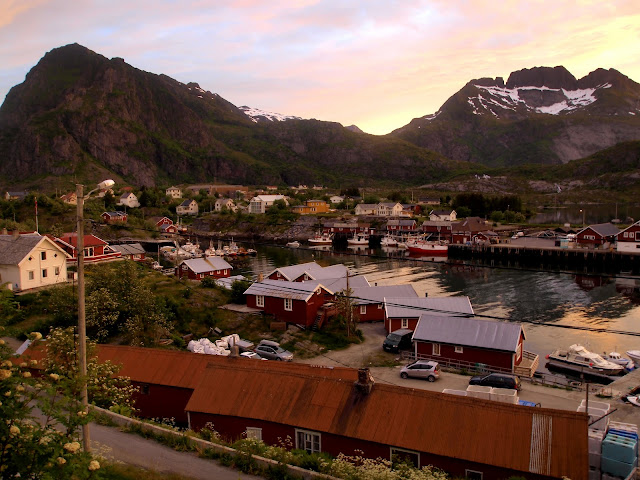 As I sat in the peace and quiet I looked at my surroundings again. Yes, the house was very basic. There was no kettle, no clothes line and the outside certainly needed some TLC but the inside was quite pretty and it was spotlessly clean apart from the outside of the windows. 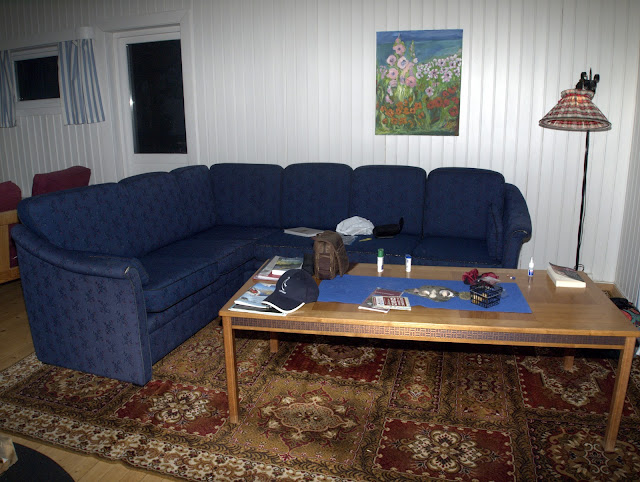 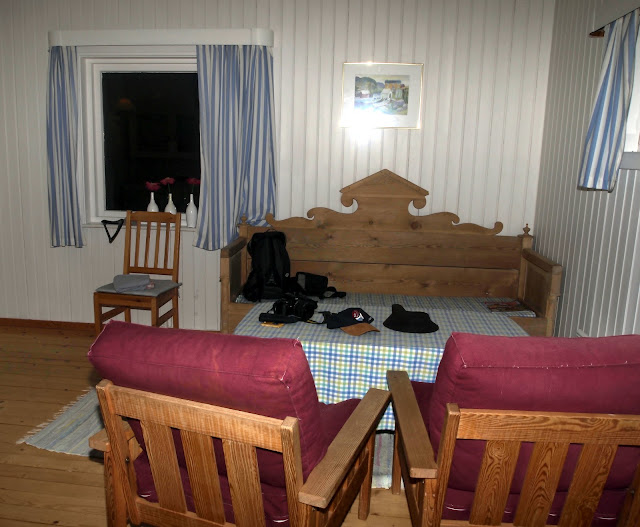 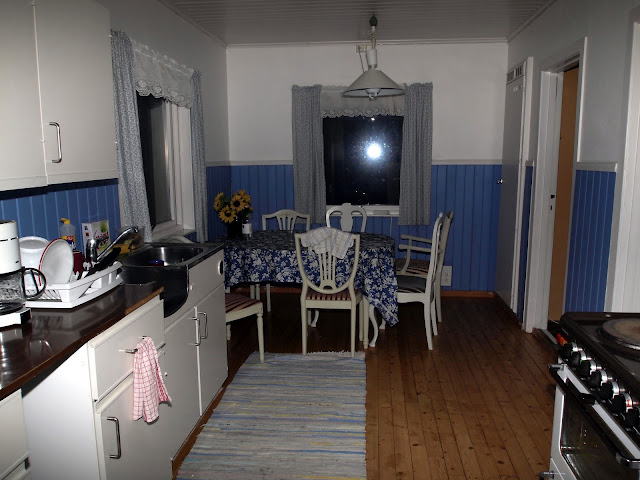 I was looking forward to what the new day would bring.
Posted by Maryhocam at 1:29 AM