We rose to sunlight streaming in the windows. What joy! Grey skies and rain become wearing after a while. Emdee and Jaydee were still sleeping. Jaydee still had the car key so Hubbie and I decided to walk to the nearest shop to get some basics for breakfast. There was nothing at all in the cupboards, not even a grain of salt.

We walked along, with me stopping to take photographs every few seconds. Luckily the shop wasn’t too far away and Hubbie wasn't too hungry. Though the shop looked small it had a good range of goods. It even doubled as a pharmacy with medicines in a locked cabinet. 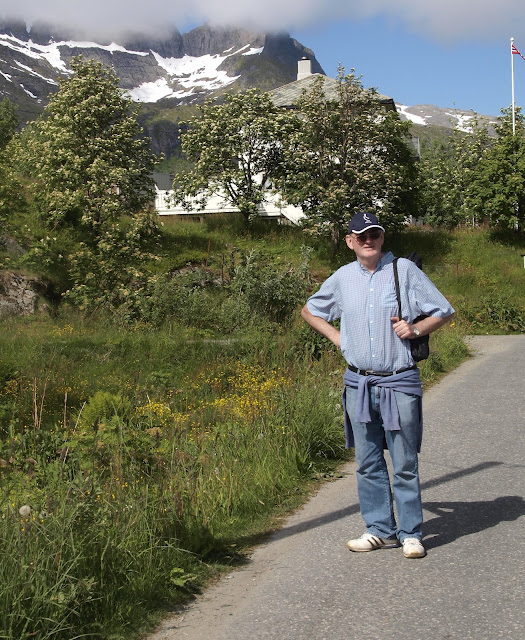 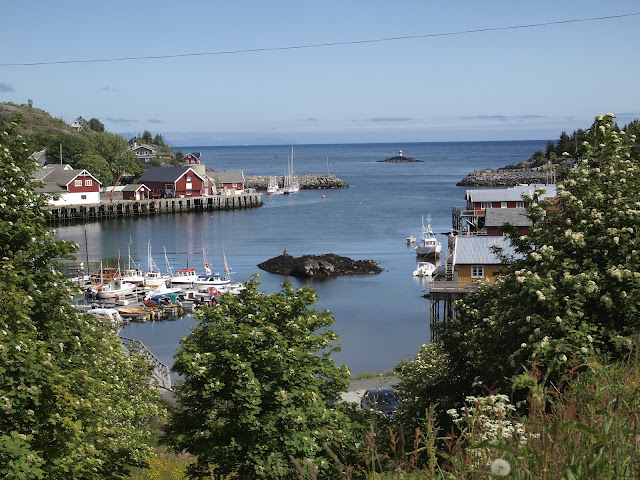 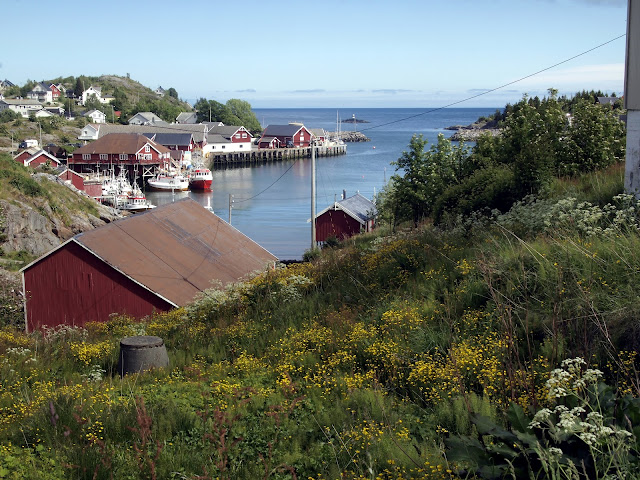 First on the list was fresh crusty bread, then fruit -nectarines, kiwis and bananas - milk and sugar for coffee and some washing powder to wash my clothes.

The others were just up when we arrived back. We had breakfast, sitting on the terrace, admiring the view. I had one of the kiwis. It came with a scoop. When I topped it, it was yellow! I tasted it. It was like someone had made a bad cross with a pineapple. It was soft and sweet. Hubbie then noticed a sticker saying “Kiwi Gold” I’ll look out for that in future, to make sure I never buy them again. 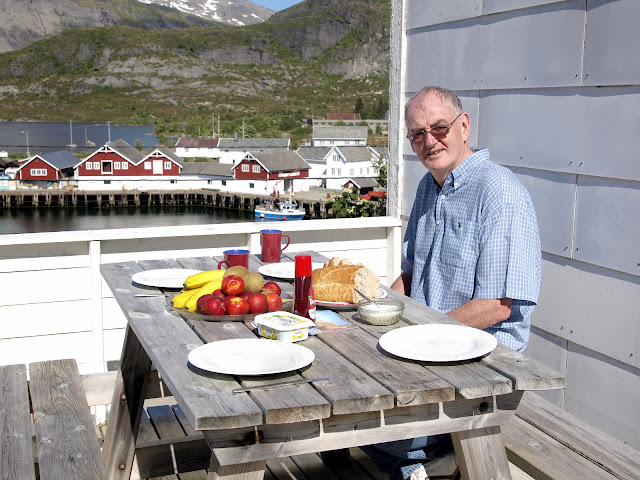 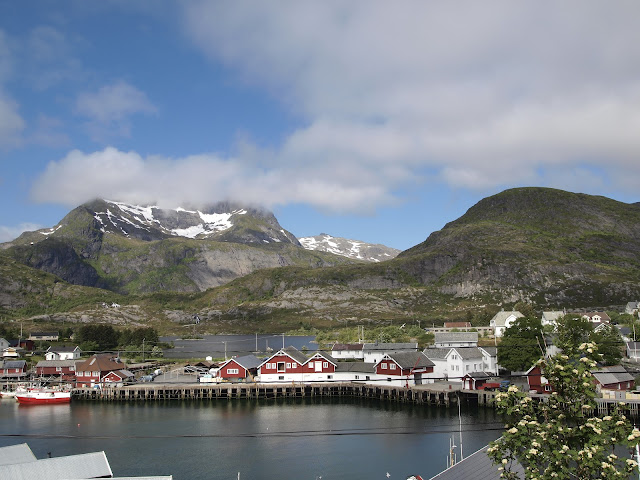 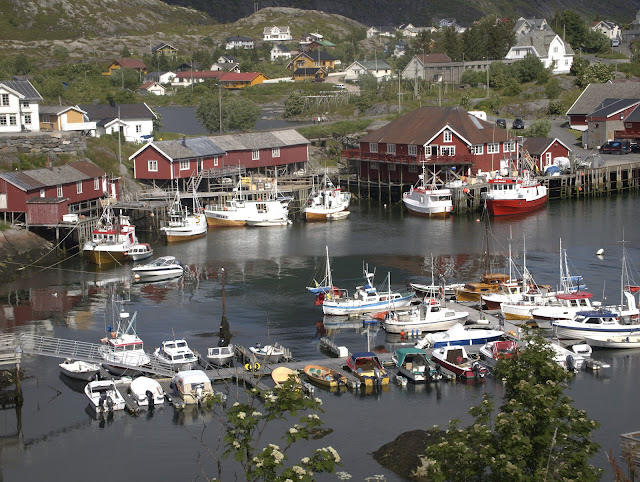 Across the harbour the Lofoten Wall rises dramatically. We could see a lake and a waterfall. We decided to go for a walk to the waterfall. We told Emdee and Jaydee to go ahead  and we'd follow at our own pace or to be exact, my pace. I’m very unfit and walking uphill is not my thing. I thought I might make it to the waterfall to take some pics. Because of this, I brought the tripod. Sorry, I should say, Hubbie brought the tripod. The scrabble over rock, to the waterfall was not to difficult and I took it in my stride. Taking the photos was a different story. Even though I set up the tripod I found it very hard to see the LCD screen on the back of my camera. There is no view finder and I'm traditional, I like a viewfinder. Up to now it hasn't been a problem but in this bright sunlight I couldn't see a thing. Most of my photos turned out "flat". Michael Herrmann where were you when I needed you? I'm going to need more tuition! I tried several different settings but I could not get what I wanted. Grrr!! 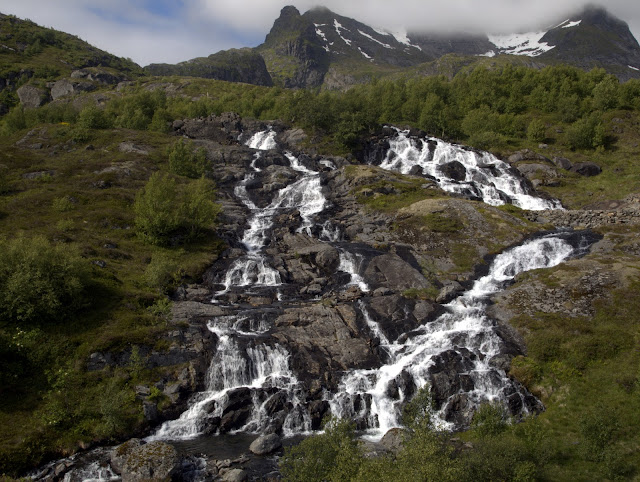 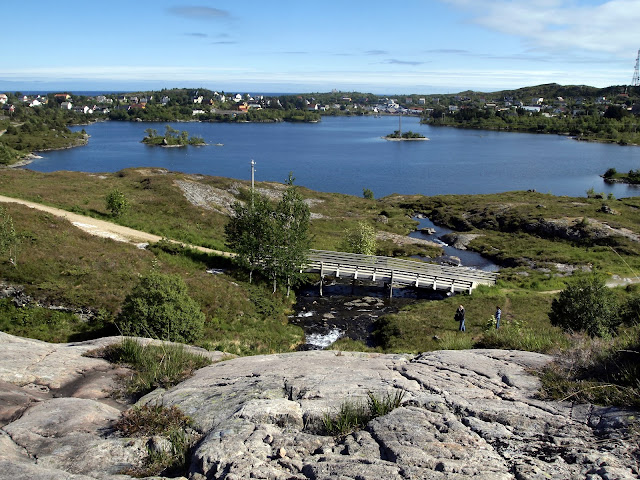 We decided to go a little higher. We followed a trail across a rickety bridge – a couple of planks and on up the mountain. Well, I puffed and panted and Hubbie had to take my hand and pull me up some of the “steps” but I made it to above the falls. There was another lake up here. This time there was a proper wooden bridge cross the stream. Water was being pumped from the lake. I imagine it was the local water supply. From here, it flowed down the mountain in a waterfall.  I was taking some photos on the bridge when Hubbie decided it would be fun to rock it. The glare he got soon stopped that. I’m a scaredy cat and rocking bridges are not my thing. 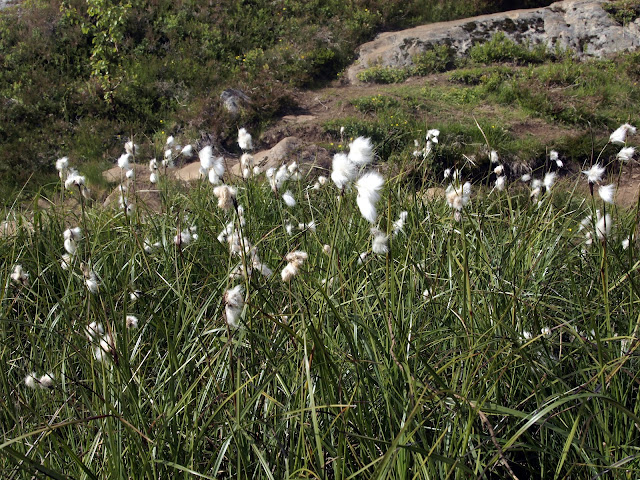 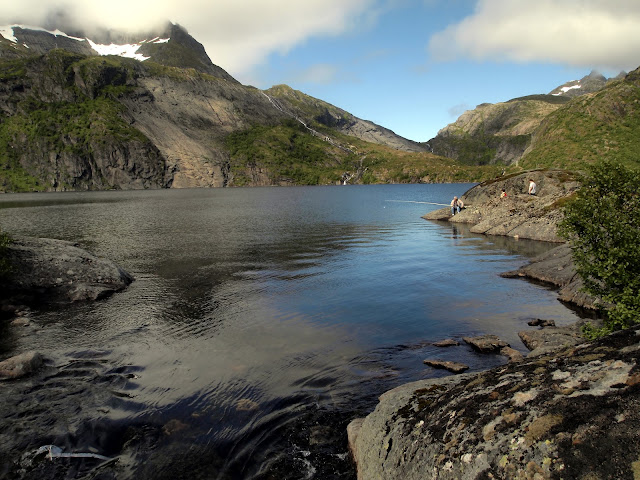 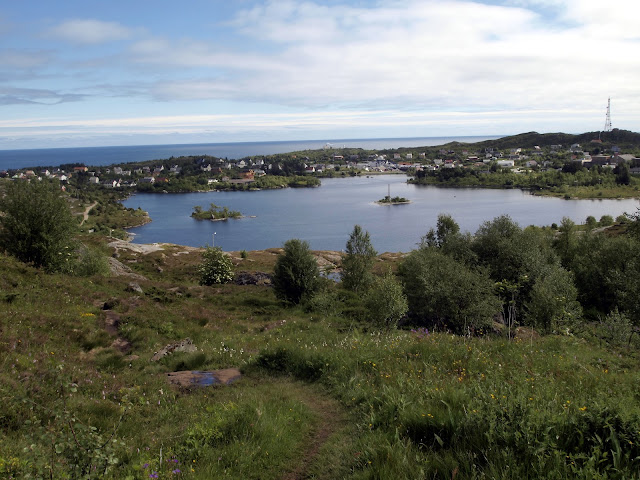 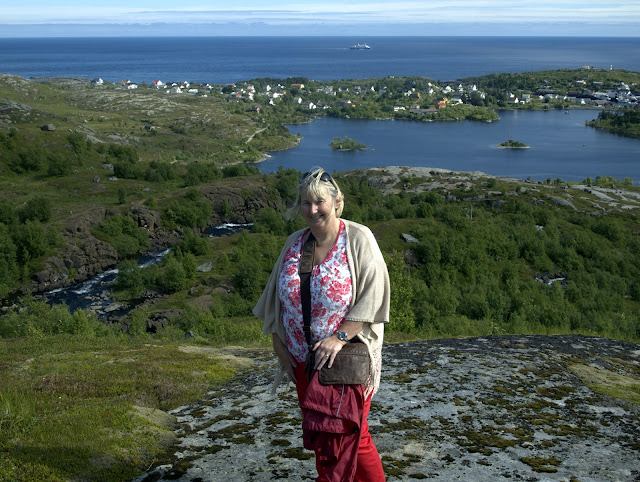 We met Emdee and Jaydee at this point. They had climbed much higher and were on their way back down. We returned to the lower lake together and ambled back to the house. My left leg, which had been in agony the previous day, from the climb up the tower of Nidaros Cathedral was now joined in it’s agony by the right one. They told me that the walking would get rid of the build up of lactic acid. Hmmm, not sure if it was successful! But I was so proud of myself for getting as far up as I did.....and I have the photos to prove it. 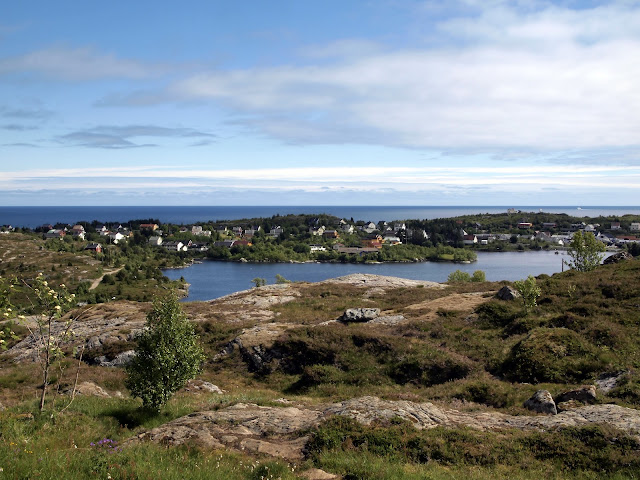 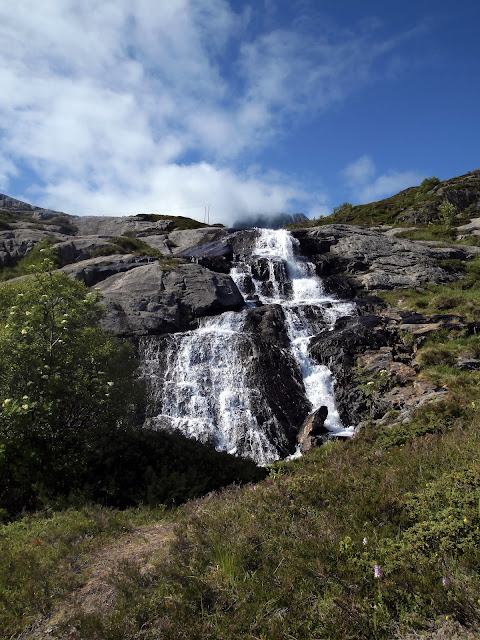 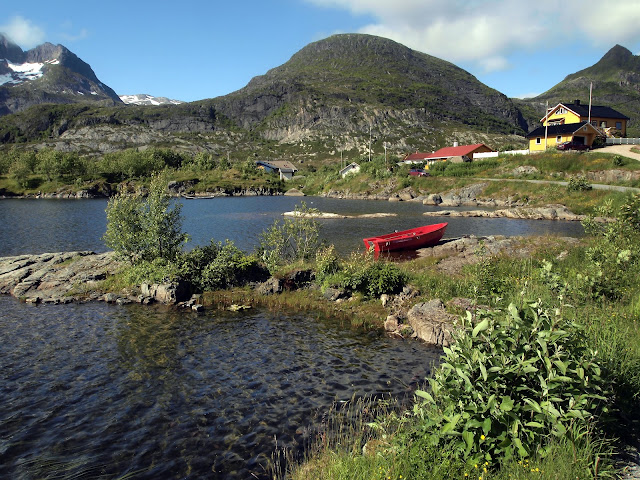 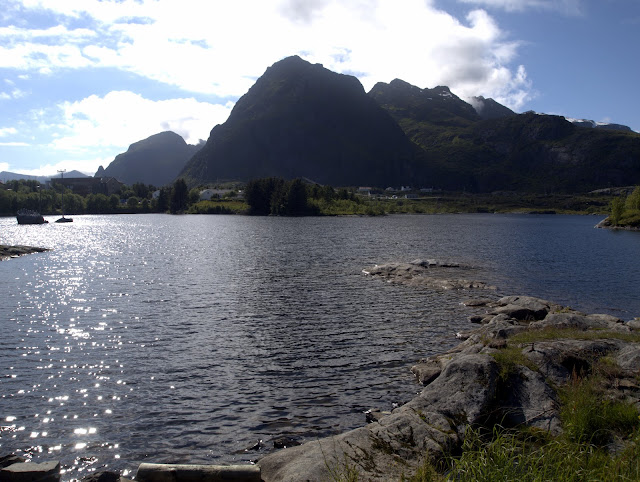 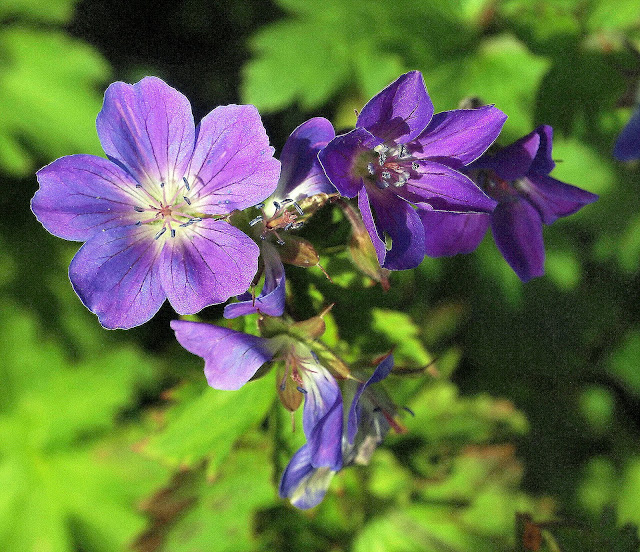 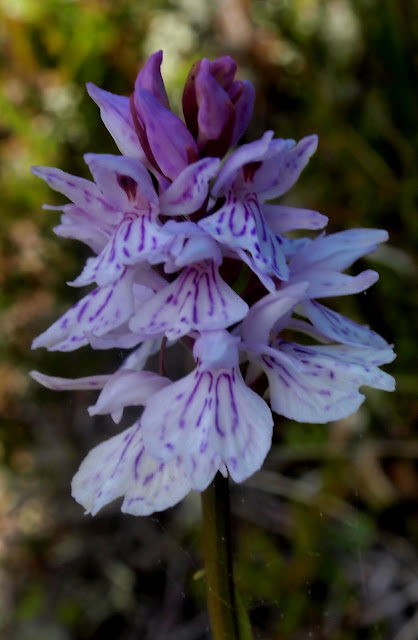 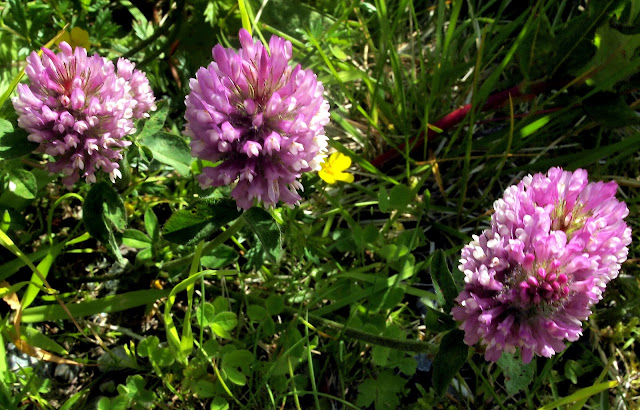 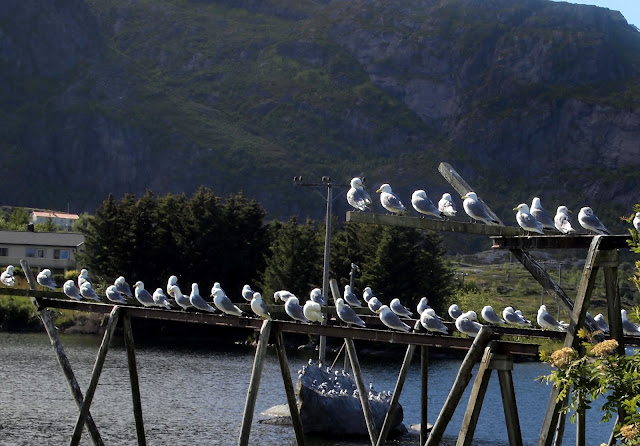 Emdee suggested we go out to eat that night as we were all tired after the walk. We went to the local restaurant, Maren Anna. The staff appeared to be Italian and were very helpful and full of fun. The catch of the day was halibut. I had saike and Hubbie had a steak. The food was delicious. But we were certainly still at Norwegian prices. €100 for 2 main courses. Wow! We’ll definitely be eating in tomorrow.
Posted by Maryhocam at 6:27 AM