The weeks roll on.

My complacency was soon to come to an end. I arrived in school on a Monday morning, planning to continue with the blog and to perhaps start showing the older ones how to use Powerpoint.

I was given my timetable. i had Grade 3 for two periods of PE, outside in the 30+C and no class teacher present. Anyone who knows me knows that PE is not my favourite subject. Add to that the fact they only begin to learn English in Grade 3. 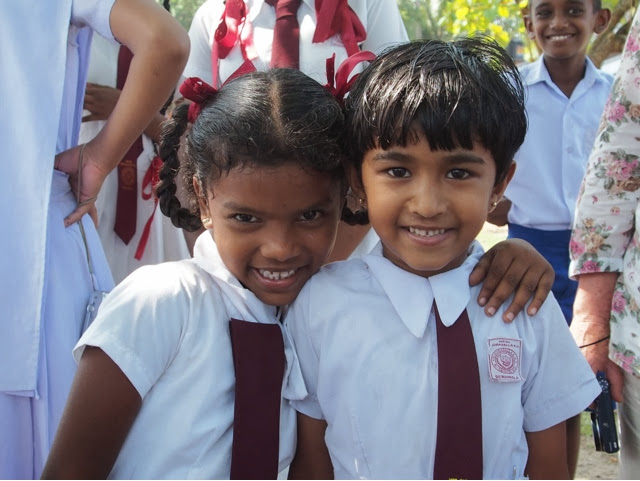 Mr. Perara, when asked how I was supposed to manage said he would come with me. He wanted to bring them straight outside but i made him bring them back.  We had an English/maths lesson so that we could play "What's the time Mr. Wolf?" Mr. Perera also translated some of the rules. This done he had to leave and of course chaos ruled. After playing the game for 15 minutes, the children had enough and when  they couldn't understand me thought it would be much more fun to throw stones at each other. Luckily, I was literally saved by the bell.

The week followed with me being sent large numbers of children from the Junior classes and also children from two special classes, who have difficulty with Sinhalese, not to mention English. So ŵe used a tying tutor and Paint. Paint was useful as it allowed some English chat when giving instructions on what to "paint"

We were all struggling. We were given our timetables daily, but this did not allow us to plan activitiesv. I guess this is whynwe were told we would need to be flexible as volunteers!!

I would be in the middle of a a typing class with a group of children and suddenly find myself surrounded by five or six more. The singing teacher came in on Mondays and Tuesdays and she would need the computer to teach a song. I would be left twiddling my thumbs.
I spoke to Mr. Perara about timetabling. We were being assigned the classes of absent teachers. The absentee rate seemed to be high. So there was no continuity in lessons.
They had discovered three volunteers was one too many for them and they didn't know what to do with us. Sue was working with the English teacher, I was doing computers, but as IT is not timetabled they could only give me the classes with free periods. I suggested giving me half a class during a subject class e.g. Geography on a Monday and the other half the next time the class had geography. This way all the pupils would receive the same instruction. It was not possible I was told.
Maggie and I sometimes split classes. She would take one half for English and I the other half for IT. We would then swap groups half way through. We got a list of the children's names to help us keep track as we often attracted wanderers. We found the same children timetabled to come to us a couple of times as they came with their class group and again with their special group. We tried to organise things to avoid them being bored, doing the same thing over and over again.
Finally, I emailed Hansika on everyone's behalf with some interim feedback. We told her we knew we were the first volunteers to the school and in that sense we were guinea pigs. We felt that the school was not getting maximum benefit from the programme due to the timetabling problem. We were being scheduled to teach classes where the teacher was absent. it aeemed to us the children were not being supervised until we would arrive and we didn't have the language to communicate effectively with them.
We didn't have a problem with being the guinea pigs but were looking for direction in how to improve the situation. If we could resolve the timetabling issue before the next volunteers arrive  next May then we would have achieved something.
There are  Saga volunteers in another school above Colombo. The volunteer programme has been running there for a few years. This other school has the same antiquated  state English curriculum and we imagined similiar problems. We wanted to know had they learned anything from that school that could be applied to ours? We stressed the fact that the email was not a complaint. The staff in the school could not be nicer, warmer or  more welcoming. While they genuinely want to improve spoken English they are proscribed by their situation. We too were newbies and slightly at sea.

We received a reply, thanking us for our useful feedback and she would get back to us on it. Hah! We are leaving next Tuesday and we have heard nothing yet. Typical Saga!

Posted by Maryhocam at 8:07 AM