Tuesdays are usually reserved for gallivanting with Mr. Man. It is his day off and I have not yet managed to persuade him that sightseeing with his "adoptive" mother will not help him catch a young girl. Solo traveller is not in his make up....though to be honest ] I think it has a lot to do with having someone to share the price of the petrol.


I had heard about a small village " Etrim Köyü'   where they make carpets and also serve a village breakfast. I have a kilim that was beginning to fall apart, mainly because of Buster kicking it to death when he is bored and wants to play. It is not an expensive one as it is machine made but I like the colours and pattern. I thought we could visit, maybe  they could repair it for me and we  could have breakfast instead of lunch.

Recently I have gotten used to eating breakfast out. I was in Istanbul last week visiting a friend and two out of three mornings we dined out. I could get used to this. My Mum would be shocked. To her breakfast is an important meal to set you up for the day She was always in despair of me for eating breakfast on the run. She often met me running out the door to work with a slice of toast in my hand.

I  brought my camera with me. Who knows what opportunities awaited. Sure enough as we turned in off the main road and it started to climb, I was telling Mr. Man to stop the car. The view behind was stunning. While he is normally happy enough to stop the car to let me to take  photographs - at least at the beginning of our days out  - it was not the case this morning. It was 10.30 and he had not had his breakfast yet. He was rather grumpy. He was in a hurry to get to our destination because he was hungry. We passed several other breakfast spots, and I got a few pleading looks but I kept  counting down, only 10 more km, 8.......5, hang on we are nearly there.


We arrived at our destination. Luckily, they were still serving breakfast. I might not have been forgiven otherwise, They did repair kilims but they weren't sure if it would be cost effective to repair my machine made one. It might cost more to do so than the kilim itself.  But first things first. Breakfast. Mr. Man was still looking grumpy. 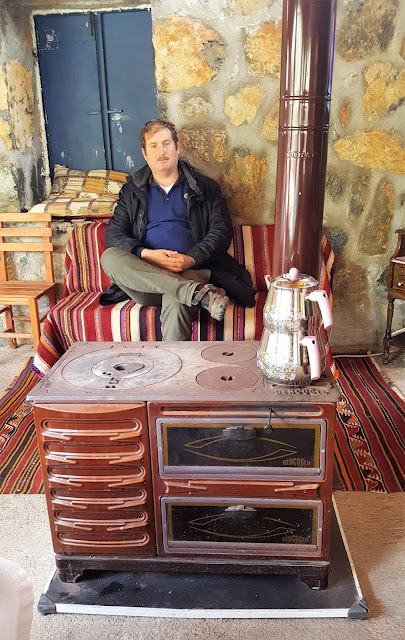 We were the only diners, it was mid week. I wandered a little as we waited.


Breakfast arrived. We were not disappointed. We chose a table beside the woodburner at a table for 4. First to arrive was the tea for Mr. Man and my coffee. He was impressed because there was a whole thermos for him.


As we waited we chatted with the owner, covering a wide range of  topics.  And then the food began to arrive.There were the traditional cheeses, tomatoes, olives, village flat bread. honey, a hot dish of tomatoes and peppers, gozleme, a spinach and cheese filled pancake, cheese rolls, honey, several varieties of jam. There was not a spare inch on the table. Deciding what some of the jams were, was fun. There was even a carrot jam which was absolutely delicious. 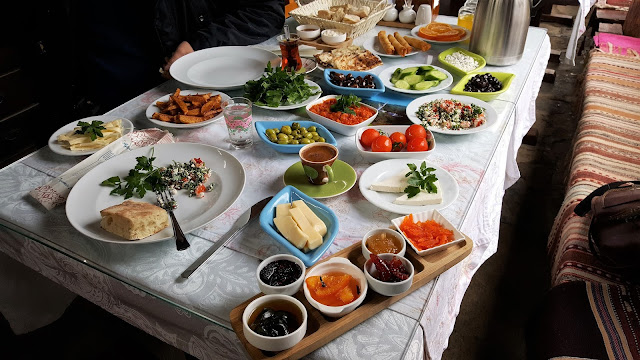 Just when I thought I could eat no more we were asked how we wanted our eggs. And received an apology that three or four items from their normal menu were missing.

And all of this for 25₺, about €6 each. Breakfast is definitely growing on me. So you may ask, why did I choose my title for this post.? This was anything but an expensive breakfast What is €6 considering the feast we had just eaten?

I had made the mistake of telling Engin, the owners son that I loved handcrafts. Therefore we had to go visit the carpets.The only machines used in the making of them here are the two legged kind The wooden looms have been exchanged for metal ones but the ladies still put in months of work as they weave their jeweled threads into magic carpets.The carpets may not fly but just looking at them made my spirits soar.

I knew I was lost as soon as I stepped into the storerooms. Since I first came to Turkey I have wanted to buy a carpet. But I either didn't have a place for one or the money to invest. I was on a trip to Iran recently. Of course we were brought to visit a carpet shop. I had to sit on my hands and keep my eyes on the ground to avoid temptation. After all I have been living in Turkey for a few years now. If I was going to buy I should support home industry.

I told Engin I didn't like the pale colours of the Milas carpets, the ones traditional in our area.   Engin promised he would convert me. He would have his work cut out as I had spotted a carpet, in a Sivas pattern that cried out to me. It was expensive but beautiful. It would be hard to top that. He began to show me some old Milas carpets, I couldn't believe the richness of the colours. I was lost.

Was it the breakfast that had softened me and put me in a mellow mood, had weakened my defences? Was it the excellent salesman who quickly figured what I liked and didn't and rolled out jewel after jewel? Or was it just the right time? time to tick off another item from my bucket list? Maybe it was that the prices were good?  Whatever it was I was hooked. I walked away with two wonderful old vibrant Milas carpets.


And I mean walked away. I came without carpet money. My only plan starting out that day was to  to have my kilim repaired and to eat breakfast. They took my phone number and said they would call when they were in the area. Engin would be over this side of the peninsula later in the evening but when I told them we were heading for Tuzla lake to see if I could take some photographs of the flamingos they said not to worry they would call in the next day or two. I would look forward to my carpets arriving and in the meantime just visualise in situ. They were wrapped up to be put to one side I thought., No! They insisted  I take them with me now,


We drove away, I sat in amazement. I had two valuable rugs in the car. They had my telephone number, They hadn't even rung it to check I had given them the correct number, They would call to the house in the next day or two and if I wanted the Sivas carpet, I could have that now and pay in installments.  Tempting. After all I have four daughters and the carpets will be part of their inheritance. Maybe I should buy two more!!

Footnote: In the course of our conversation I mentioned we were looking for a wife for Mr. Man. Mr Carpet Maker knows a girl that might be suitable and has offered to do the introductions, While this may have been a more expensive breakfast that planned, will it mean that it is not just me who ticks off an item on their bucket list?  Inşallah.
Posted by Maryhocam at 9:52 AM