A Tree with no History!


These past few year has seen many changes in my life, the most recent being selling my house in Bodrum and  moving back to Ireland. This happened in the summer of 2017. I love my new home, though miss my friends and blue skies of Turkey. But you know my penchant for travel so I have been back, to scratch that itch a few times since.
Last Christmas was my first Christmas in my own home since I separated from my husband. The previous four years  I had been a visitor, returning to Ireland to celebrate with family and friends. The first two years I didn’t bother with a tree in my Bodrum house. But the Christmas spirit overtook me and three years ago I ordered a good quality six foot artificial tree  that looked like a “genuine fake” as the guys in the local Pazar would say. I had it sent to my poor long suffering brother in Killarney.  He then hauled it out to me on train, buses and  planes. I could tell you that it was blowing a gale when he got to the airport and his flight was cancelled until the next day, but that is his story to tell. Enough to say he got it to me and even assembled it as that was the year I had broken my arm in Vietnam. On returning to Ireland I left the tree behind with a friend.


While not enjoying the over commercialisation of Christmas I will have to admit enjoying the Christmas music piped through the streets of Wexford when I ventured into town to do my shopping.  I will even admit to singing along. It's easy knowing my youngest wasn’t with me as I would have got a horrified frown and a strong admonition “ Mam, don’t!”

I was looking forward to having a real tree, I had just the place for it in my kitchen which is the heart of my house. It arrived, bringing with it the wonderful smell of fresh pine. Lucky, a four month old kitten, who came to me two weeks ago was even more excited, proving the fact by being the tree's first decoration. One friend suggested tying a ribbon around her neck and declaring the tree decorated. Another friend send a picture suggestion, wrap her in cling film.


I had some decorations but the tree was big, so I headed for town and spent an obscene amount of money buying new ones. I returned home to start decorating. That's when the sadness hit me like a ton of bricks. My tree was a tree with no history.

There was no plastic Santa in his sleigh being pulled by eight reindeer, faded and worn, with the reindeers' antlers sticking out at very odd angles, a souvenir of our first Christmas when we could afford very little.  But it is  a family Christmas institution.

Where were the Newbridge Silver decorations that we had bought each year for the girls so that when they had their own places, they would not, like us,  have to start decorating from scratch.

The mice in the teacups were missing, as were the glass angels, that I bought one year instead of the silver decorations, the rebel in me. I love colour. And where the beautiful painted decorations from the first Christmas market that we went to in Frankfurt. I remember when I got my first glimpse of the stalls saying I had died and gone to heaven. Thank God at that stage Ryanair wasn't as strict with luggage restrictions.

Nostalgia was washing over me as I thought back to the battered silver angel that sits at the top of the family tree. I had tried to replace her many years ago with a prettier less tattered one and I was firmly told off. It really had not occurred to me until now how much family history was on those trees of past years, until I stood looking at my bare tree in my new home. All of the decorations I had collected over the years had been left behind me. While I may have purchased or been given them, they were no longer mine, they were now the family's, an integral part of their Christmas.

I took out the new decorations along with the few I had brought back with me. Lucky and I battled over the placement of some of them. She reckoned it was her tree. The result, a Santa with only one foot, a new piece of history.

As I decorated, I placed the straw decorations that my brother had brought out with him when he and Lily from Chile, grappled with getting a 6 ft tree from Killarney to Bodrum on a day that was so windy it grounded their flight 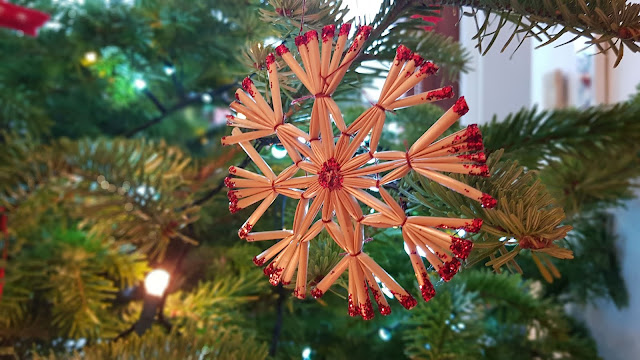 .
This bird used to perch on a branch with a smaller one lower down. At the press of a switch, it called over and over again. It was the first birthday present Mr. Man gave me. Even though it was battered and thankfully silenced, I couldn't bear to put it in the rubbish pile when I was leaving Turkey. So I removed the birds and though they are missing feet, they now are happy perching on a real pine tree listening to my Christmas music, 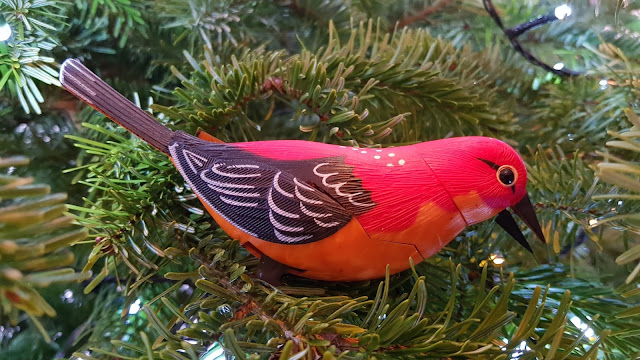 Next to appear was  a star I was given in Nepal. Stars have a habit of doing that around Christmas time. 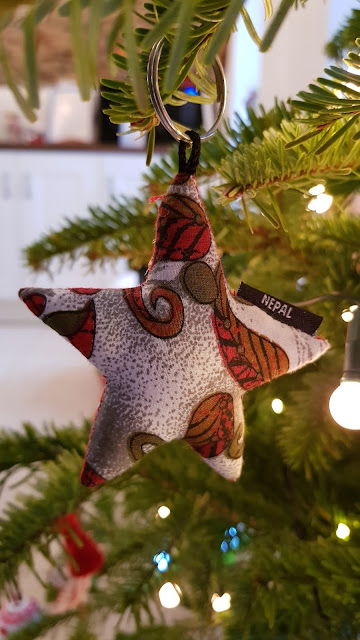 There are plastic baubles I bought in Migros along with the coloured lights to supplement the straw decorations the long suffering brother  had given me. 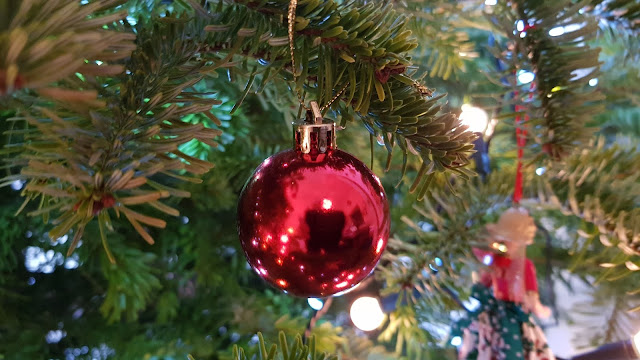 There is a knitted star, this one didn't magically appear . I made it while in Turkey. There is the sequined bauble given to me last year by daughter No.1 Note the large hole in the side. Lucky's handiwork 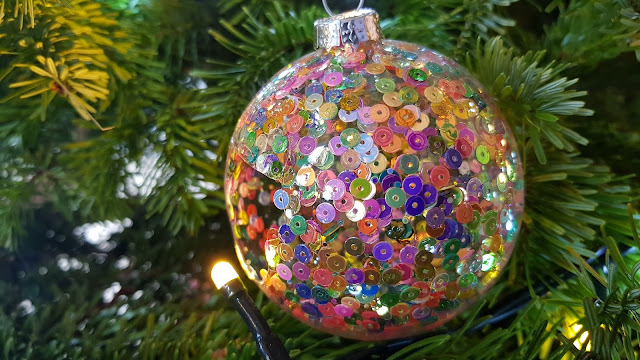 There are  painted glass baubles given to me by all four daughters but chosen by daughter No.4 when we went to the Christmas markets in Prague. There is also a glass penguin we bought when we were in Rome to celebrate her 30th birthday. 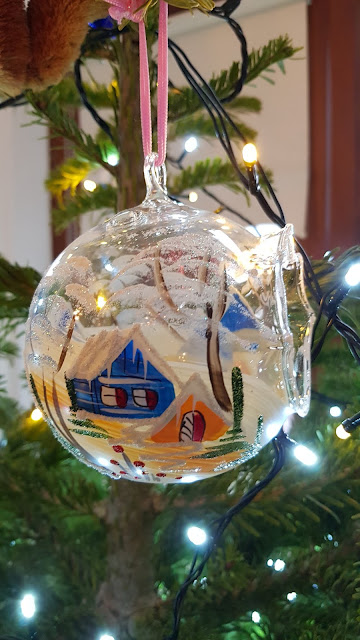 Then from the bottom of the box emerged a very precious cloth angel wearing a traditional Vietnamese conical hat, a reminder of my friend Kathleen, who was my angel in Vietnam. When I fell and broke my arm quite seriously and split my head open (unfortunately failing to knock any sense into it) she was there by my side to make sure the ambulance was on its way, that I got the best of care, to liaise with the insurance company and my family. When she had to leave and carry on with our trip she left me this angel to watch over me 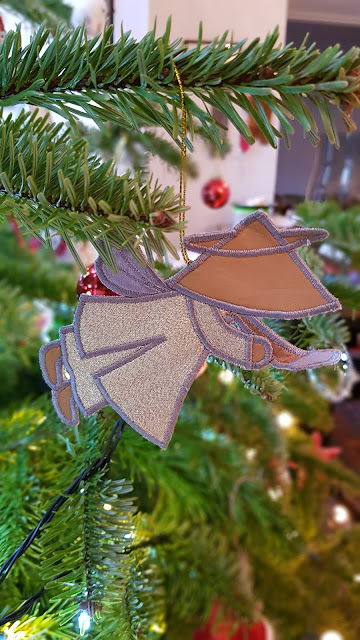 These carol singers weren sent out to me by my niece. I wonder are they a sign she has forgiven me for serving her lamb köfte, when I didn't know she had foresworn eating those cute gambolling creatures? 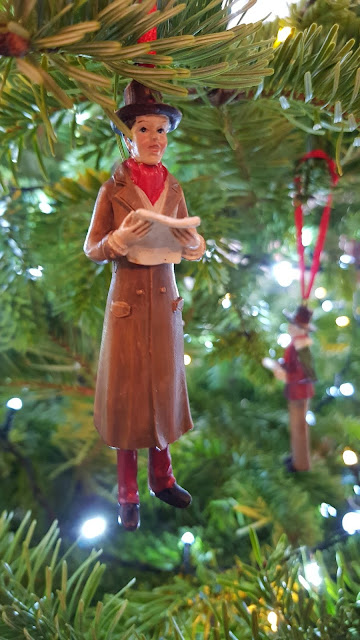 Then are the new decorations, one of my favourites is a 1950’s figure of a woman baking, chosen because the kitchen is the heart of my home. I love to cook and to have friends over. There is nothing more satisfying than sitting chatting around a table with friends and sharing a meal that I have cooked . 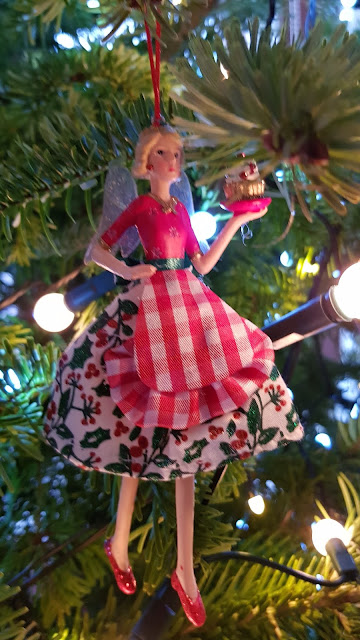 Did I say my Christmas tree had no history? How wrong I was! It has a different history a more recent one But maybe if I am around in 35 years I will be boring children, grandchildren and great grandchildren with the stories of my Vietnamese angel,  how Santa lost his boot when Lucky came to stay and do you see that woman there in the apron?  That’s me except I was never a 1950's woman. I was independent, and even though I loved to wander, I was never lost. There was always a kitchen table waiting for me to fill at home.

One of my new decorations sums it up. 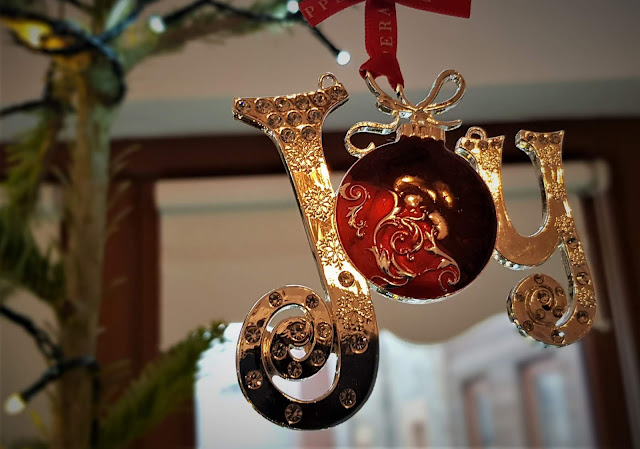 This year I got slightly carried away and overestimated the width of my tree space. The tree like it's owner is slightly broad in the beam!

Footnote: This piece was written last year but not published. I had no wifi for 10 months.

Added to the memories this year, Santa in an airplane given to me by the same bruv, to commemorate all my travels in this wonderful year as I celebrated my 60th birthday.  Merry Christmas everyone and may 2019 be a good year for us all. 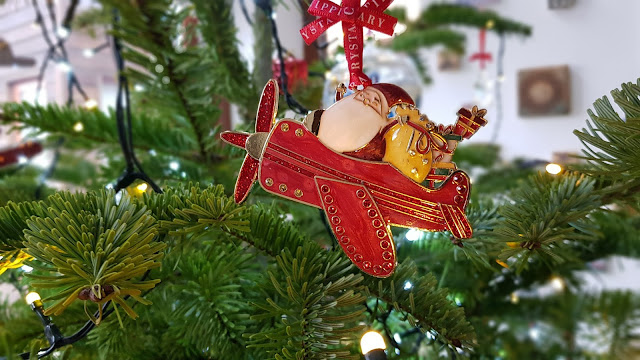 Posted by Maryhocam at 5:19 PM