Today our Norwegian adventures began. The planning that began a year ago is finally coming to fruition. Yesterday, while packing my suitcase, I received a text from SAS telling me that I could now check in online.Thank God for the text! Our flight was two hours earlier than originally scheduled. Hubbie was doubly grateful because the seats in the emergency exit row were free. No, he didn't want to bail out midway, he had room to stretch out his long legs.

I was amazed when we were leaving the bags at the bag drop in the airport. My case came in under 20kg. Now that was a surprise. Packing had been bit of a nightmare. We have come for almost 4 weeks and have been told by one of our house swop families to expect anything from 30C to 10C and "sideways" rain.

We landed to beautiful sunshine and 23C. This was a real bonus. We have had so much rain at home and looking at the temperatures in Bodrum, I sometimes wondered why we decided to come to Norway. But weather isn't everything and I've been promised a photgraphers paradise. I'm told they say in Norway "There is no such thing as wrong weather only the wrong clothes"

We took the Flybussen into the central bus station where we were met by Jan, the owner of the apartment  we have rented for three days. We were literally 2 minutes walk from the apartment. He took time to show us everything, invited us to use the basic supplies in his kitchen....but not all please .....and then recommended some of the sights to be seen in the next couple of days. A warm welcome indeed.

We caught our breath and sat on our balcony drinking coffee - or water in my case. As it was late afternoon we set out for a short wander, to find our bearings. Outside the main train station, we stopped to look at our map and a lovely lady asked  if she could help. We explained we had just arrived and were not looking for anywhere in particular. She directed us to Karl Johans Gate, a long street, part pedestrianised that leads in a long straight line up to the Royal Palace. She said it was the most beautiful street in the city. I didn't have my good camera with me as we were just out for a short stroll but these photos taken with my compact will give you an idea of the area.


The palace is surrounded by parkland, open to the public. In this it is unique in Europe. But what a delight, rolling lawns, ponds  and beautiful mature trees. People were just sitting here and there on the benches or on the grass enjoying the late evening sunshine. No "Keep off the grass" signs here. 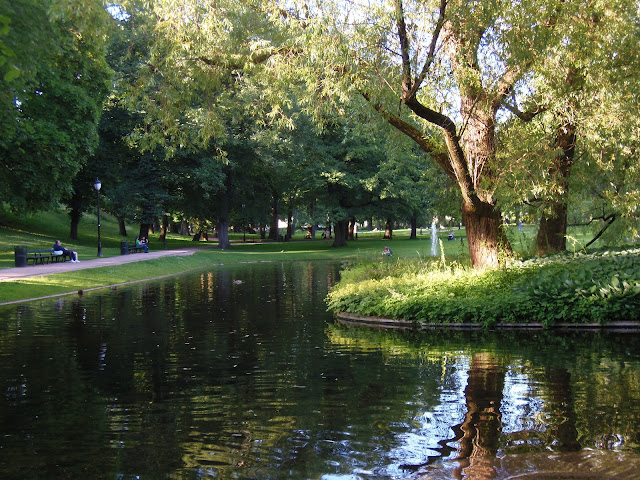 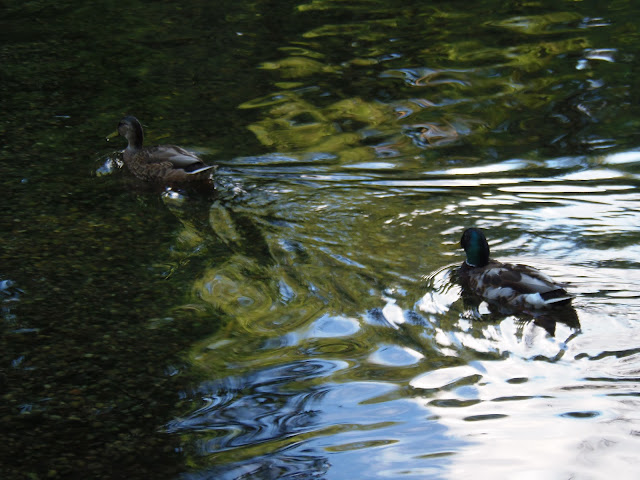 After that it was time to head back and get something to eat. Now there was the ouch. €47 for a pizza, meatballs, coke and a glass of water. And we thought Ireland was expensive! Oslo is in the top ten most expensive cities in the world. This holiday could be very good for my figure!!
Posted by Maryhocam at 10:39 PM