We allowed ourselves to have a relatively lazy morning, going down for breakfast at 09.30. There was a great range in the buffet. Besides the usual cereals, fruits, bread and jam, there was a hot buffet of sausage, chicken, potatoes and eggs. In addition to this there were several varieties of cold meats and well as fish and pickled herrings. I was restrained, I just had some scrambled eggs and bread, with lots of lovely fresh orange juice. That would fortify me for what was to come next. 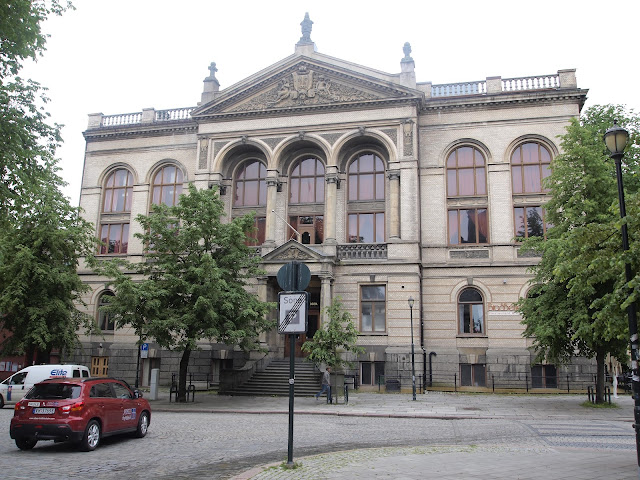 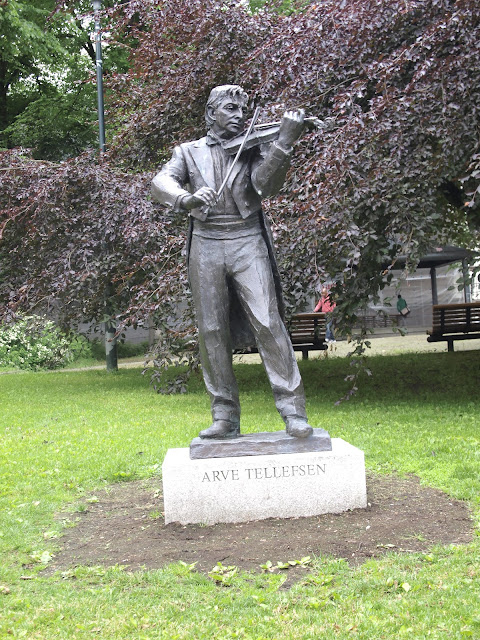 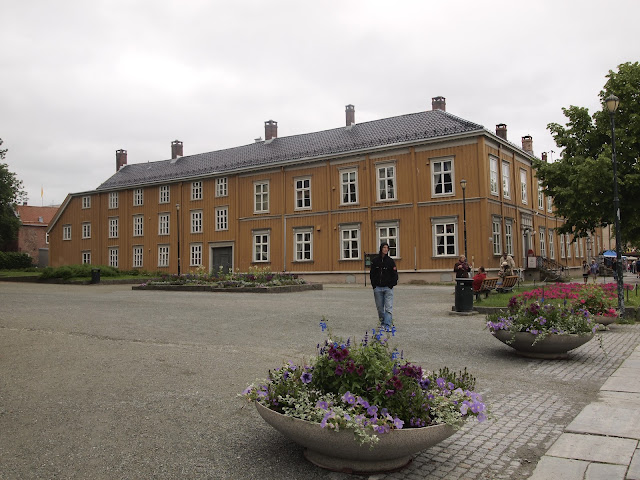 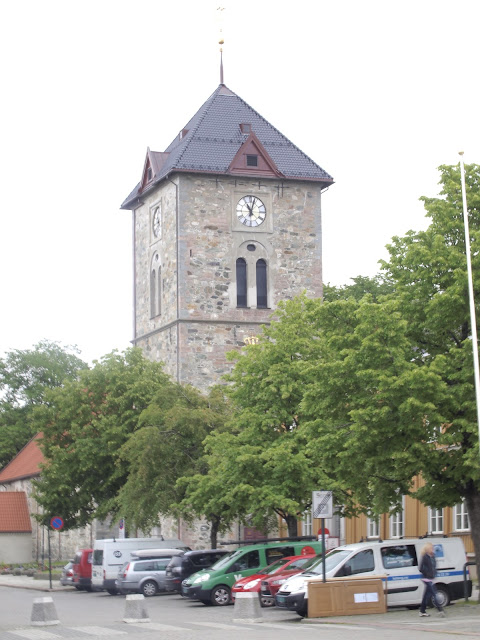 We set out to see the catherdral. The town was still fairly quiet. We reached the market square where there were stalls selling fresh fruit, clothes and souveniers. I went to take a photo of Olaf on top of his pole, when I looked back Hubbie had bumped into Hubbie 2 and they were sitting down for a chat. 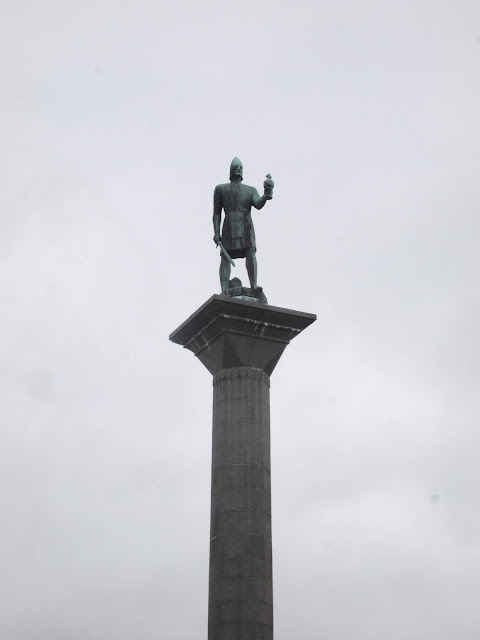 We could see the cathedral ahead of us. On our way I discovered they had put statues of Hubbie and I outside the tourist office! I don't know how they knew we were coming but there we were. We took a couple of snaps to show the folks back home because I'm sure they wouldn't believe us. 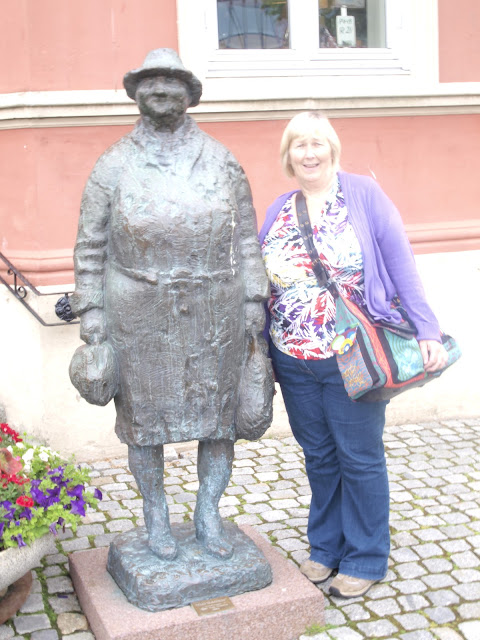 As we approached the cathedral I had an idea.  I wanted to get a good shot of the catherdral. Norwegian drivers, unlike the Turks, seem to be totally law abiding. If I stood in the middle of the pedestrian crossing the cars would stop and I could take my pictures, no problem! 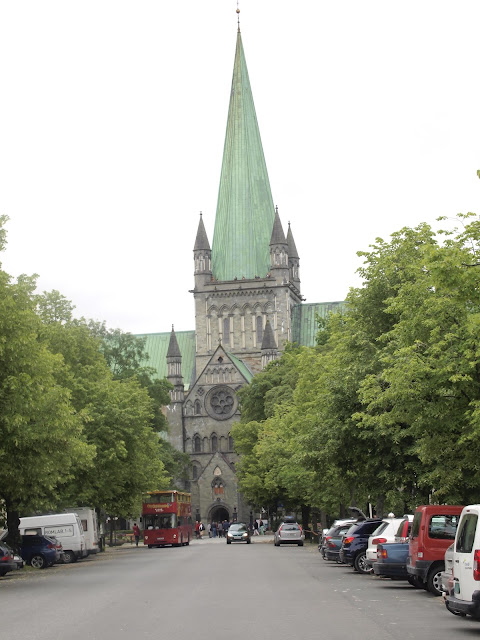 Entering the cathedral grounds, I was captivated by the quietness under the trees. There were several graves here and I informed Hubbie I could easily rest in peace for eternity here.  "Don't tempt me," he replied. 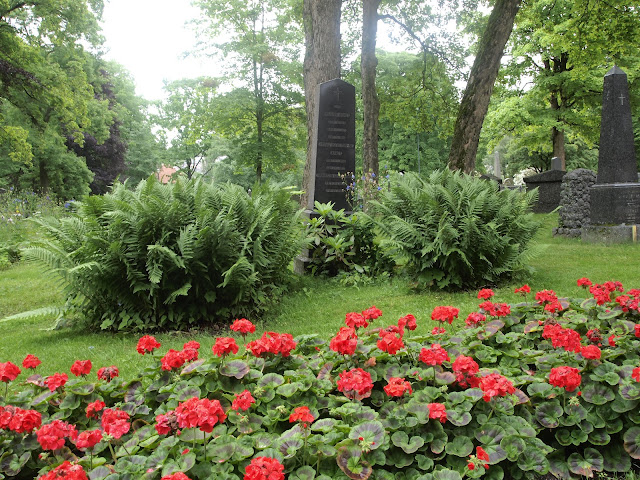 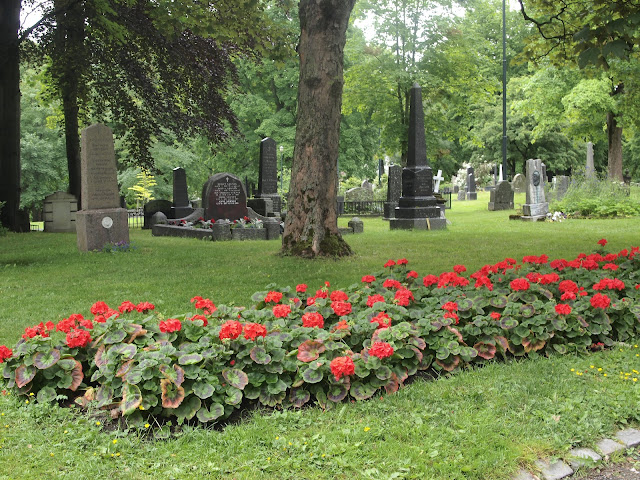 Nidaros Cathedral appears to be Anglican. We saw a sign that told us that we could go up the central tower, for a fee of course. While I baulked at the idea of climbing up a lot of steps I wanted to see Trondheim from a height. We paid the entrance fee for both the cathedral and the tower. The next tour to go up was in half an hour. We wandered around inside. There was very little decoration in the catherdral, but the stained glass windows were beautiful. Photos and video are not allowed inside as we were reminded it is a house of God. 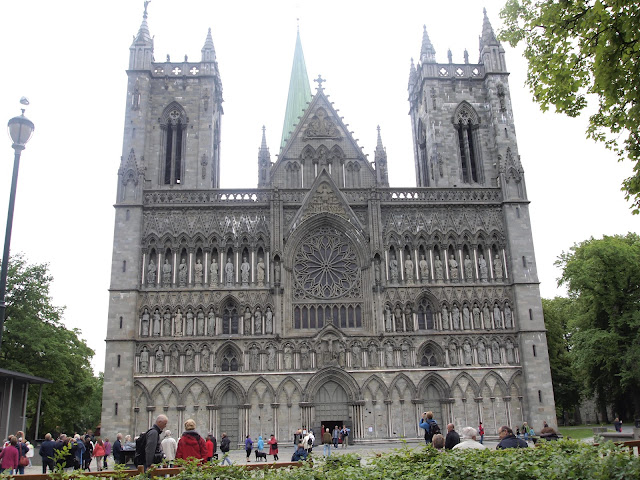 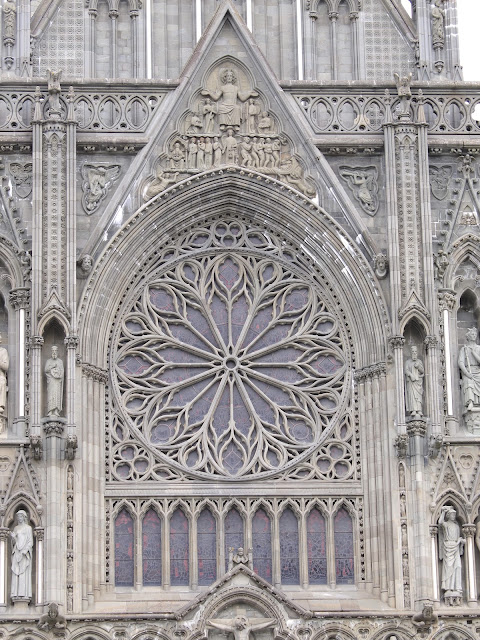 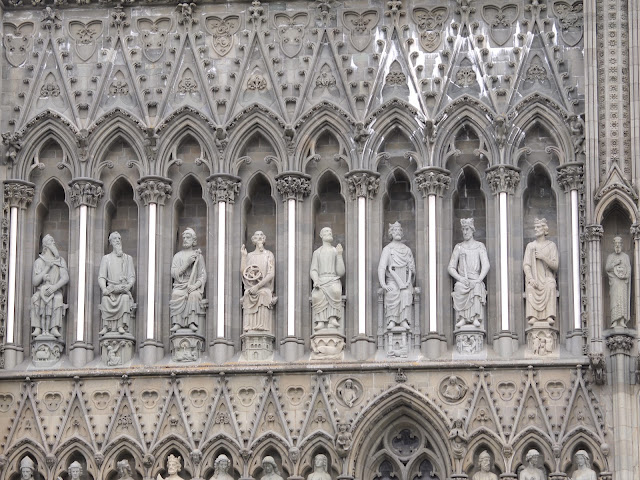 Underground was a crypt where there are some very old tombstones on display. One was erected by a Scottish shipbuilder for his brother, also a shipbuilder who dies in Norway in the 1800’s.

Then it was time for the tour. There was a health warning for anyone who had heart problems or was claustrophobic.  Now I was beginning to worry! The guide called everyones attention and explained that the stairs was narrow. Anyone who might find it difficult should go last as there was no way to turn around and come back down if you got nervous or frightened halfway up. Myself and another lady immediately headed for the back of the queue. I wasn’t worried about the narrowness, I was hoping my knees and lungs wouldn’t give out.

174 steps. I didn’t realise when they said narrow, just how narrow the stairs was. I think if I was an inch wider I would have got stuck! To cut a long story short, with some puffing and panting I made it to the top. 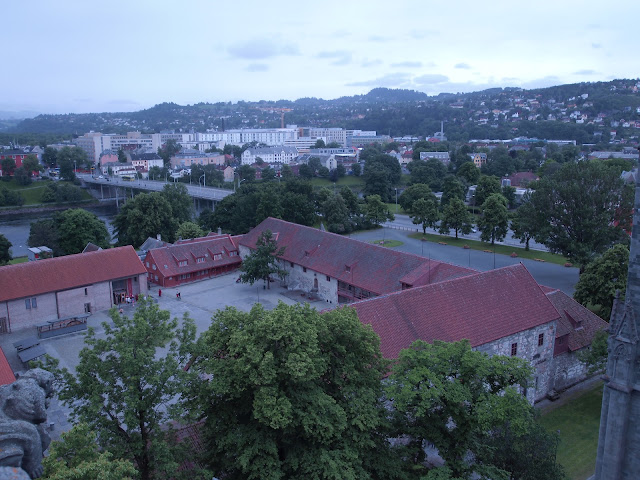 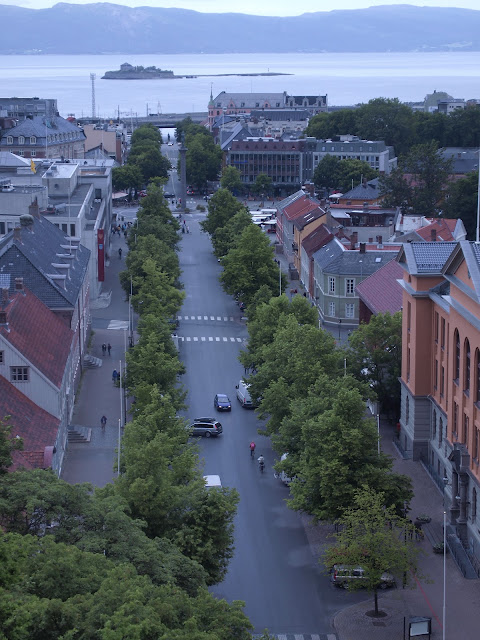 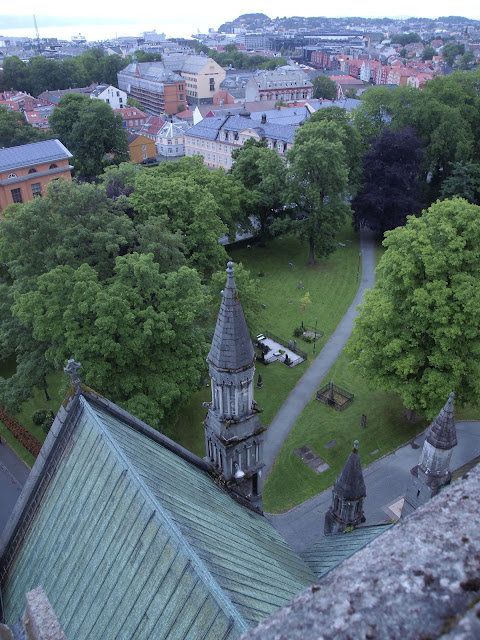 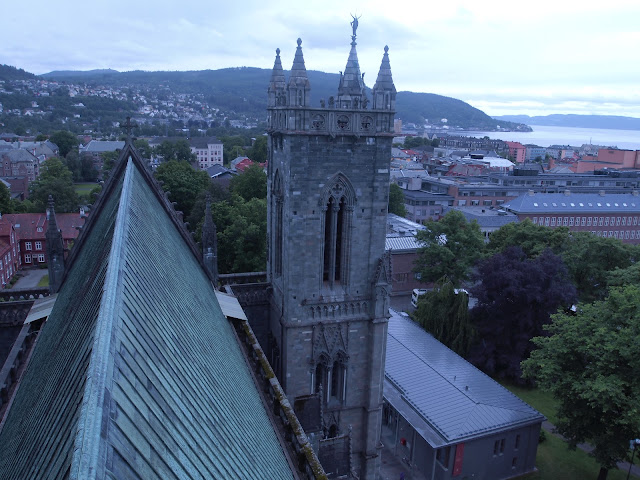 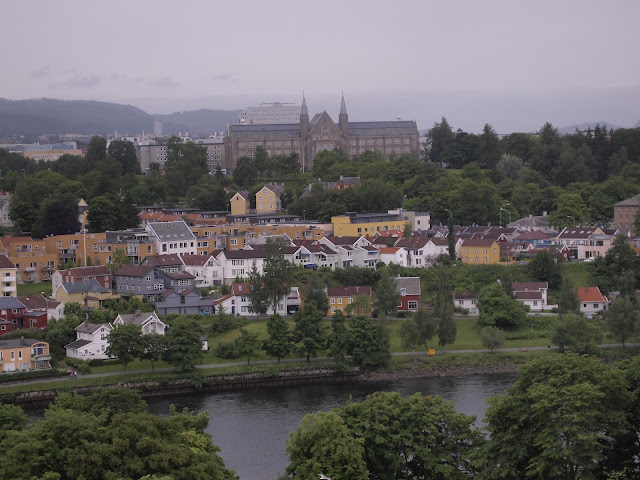 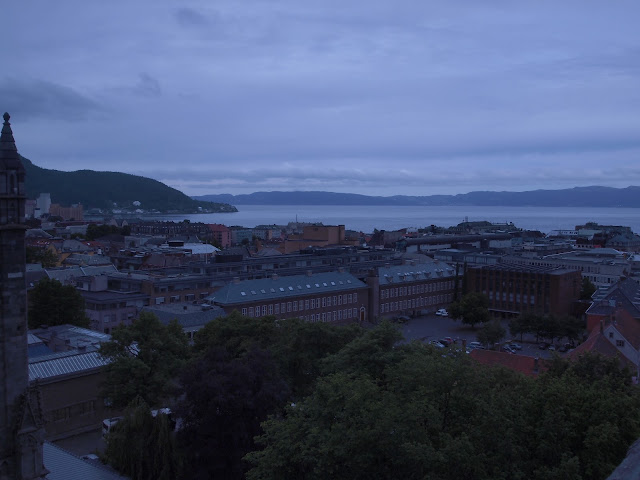 I definitely had the wrong settings on the camera, but believe me I was lucky to be just able to press the button. It also just started to rain when we got out on the roof. It actually wasn't the climb that had scared me s***less but I was wondering how in the name of God I was going to get back down.


Well, as I’m here writing this post you can see I made it. I went down slowly, step by step, always leading with my right foot, my left hand holding the rope  so tightly I thought I’d have rope burn.(there was no room anywhere for a rail).

I got down, took a few steps and decided my left leg needed to sit and rest or someone would have pick me up off the floor. My legs had turned to jelly!  We sat on the nearest available seats and through the haze in front of my eyes I noticed lights come on in the organ loft.  Celestial music. Had I died of a heart attack and not realised it?


Wow! We were really getting value for our money. There was a short organ recital. It was wonderful I didn’t know an organ could make so many different sounds. For the second piece two discs on the front of the organ began to spin and the music played was very light and whimsical. I have to confess to some naughtiness. Placing my finger over the lens (I didn't take any photos in the church) to  I recorded the music on my latest toy, my brand new iPhone.

After the recital we bumped into Emdee and Jaydee. They had been there too. They hadn't climbed the tower nor had any intention of doing so. I could tell by how steady they were on their legs. I was in need of a strong shot of caffeine, the music was an excellent relaxant, now I was in need of a stimulant. So it was time for coffee and cake. 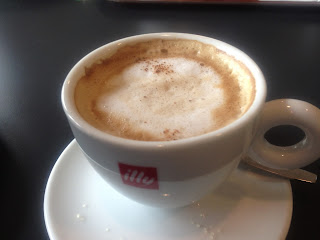 From there we went to the Stiftsgarden. It is the largest wooden building in Trondheim and is the official Royal Residence. Our tour guide was brimming with enthusiasm for her subject as she filled us in on the history of the building.  Once upon a time, whenever they had a party in the throne room they used to tear down the wall separating the room from the garden and add a marquee. Now they just put the marquee in the garden. The wall stays in situ.

That evening we repaired to “The Steakhouse” for a meal. The menu arrived with a card for you to fill in with your choice of steak, the size, how you wanted it cooked, any sauce if required and what side orders you wanted. It was a very effective way to order. Later there could be no misunderstandings as to how you wanted it cooked. The steaks were delicious, juicy and tender, even those that were ordered “well done” They would want to have been. At over €40 for a 7oz steak it was the dearest steak I have ever eaten.
Posted by Maryhocam at 12:33 AM