We arrived into Trondheim to the rain. We had had cloudy, sunny and misty weather as we had travelled on our journey but this was the first rain. It must be following us, knowing we're Irish.
Luckily, our hotel, the Thon Gildevagen was only five minutes from the station. Emdee and Jaydee's hotel was also belonging to the Thon Group but was a little further away. Our room was small but perfectly formed. There were two comfy chairs in front of a large plasma screen TV. Hubbie was able to watch the men's singles final at Wimbledon, much to his pleasure.

Shortly after arriving in Trondheim, we went out to get a snack to keep us going until dinner time. It was still raining and Trondheim was deserted on this Sunday afternoon. It took us a while to find a coffee shop. But it was worth the wait. Hubbie had coffee and a sinful chocolate cake while I had a mixed fruit juice and cheesecake. 180kr for the pleasure, approximately €25. I should live here all the time. I would be wonderfully slim. I was full half way through my slice but at that price it would be a bigger sin to leave it. I won’t be indulging too often.

We went out to walk off the cake, but the drizzle had become rain. So we went back to the hotel. Hubbie, watched the match while I answered emails and tried to research somewhere to eat. We were meeting the others at 7pm.

Lonely Planet recommended a restaurant in the old town. Baklandet Skydsstasjon. Emdee had seen it earlier that afternoon and was happy enough to try it. We crossed the Gamle Brygge. It was wonderful to see the colourful buildings that lined the wharves. 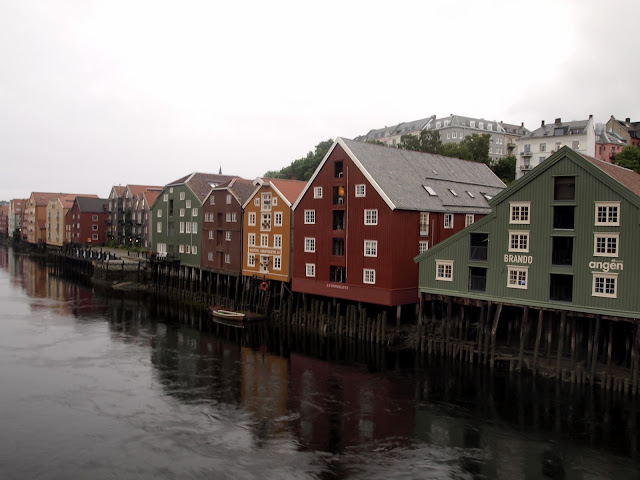 Then we were in the old town. It was full of crooked streets lined with colourful wooden houses. My camera was out again, even though it was a dull misty evening. People who like to take photos must be a real pain in the neck. I was slowing the whole process down. 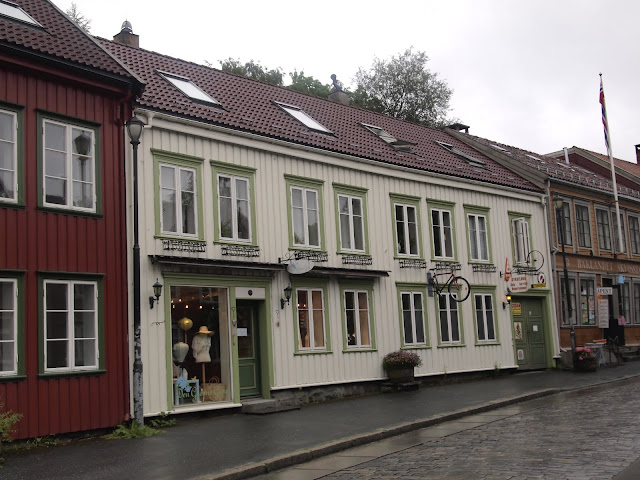 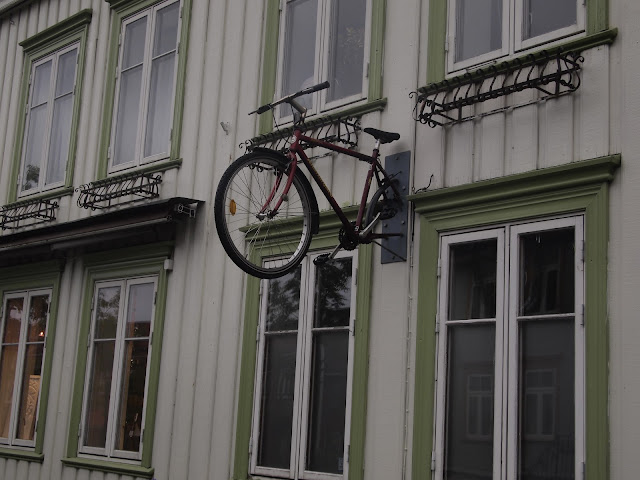 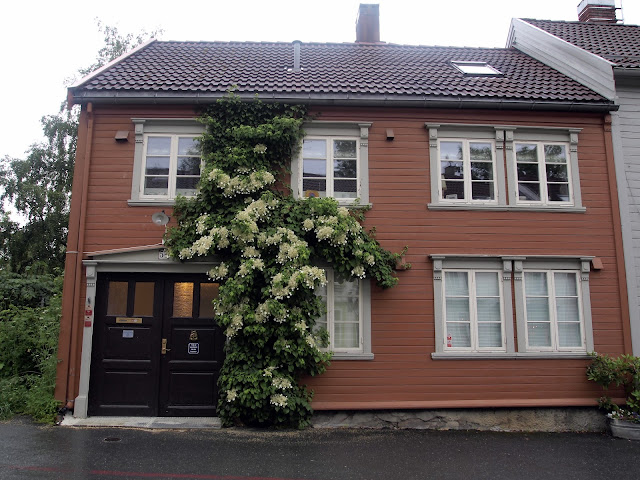 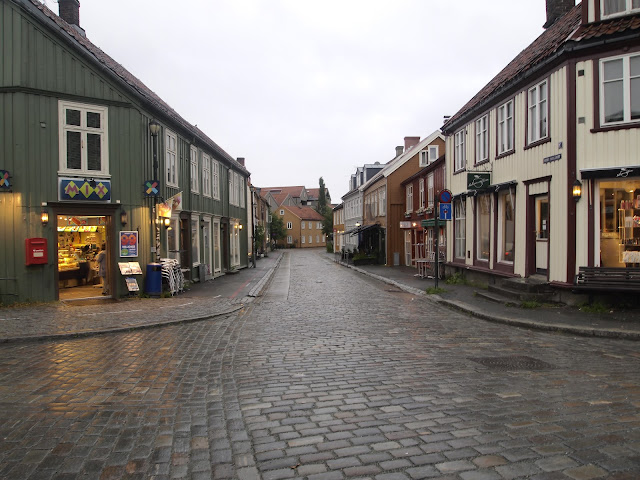 We arrived at the restaurant and it was just as described. We were seated, given menus and told to come to the counter and order when we were ready. As soon as we ordered we had to pay. Hubbie and I both tried a local dish, Baccolo. It is salted and dried codfish with potatoes in a tomato and garlic sauce, Jaydee had herrings with three different marinades, while Emdee had salmon. This was slightly overcooked, but declared the carrot cake she later shared with Jaydee to be delicious. 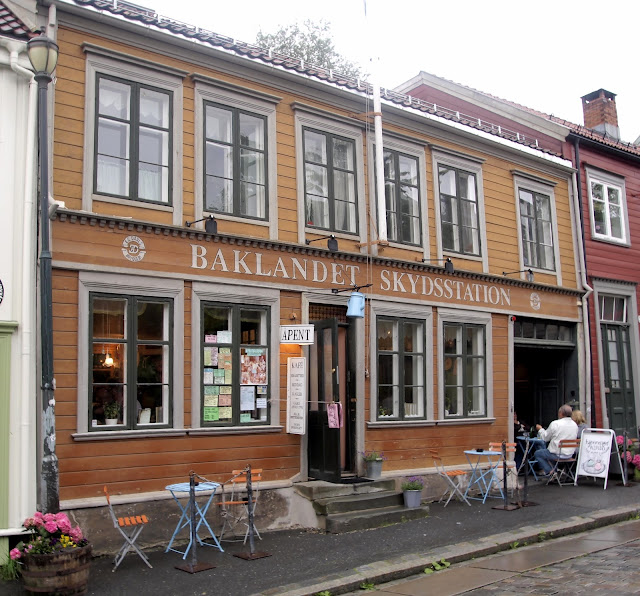 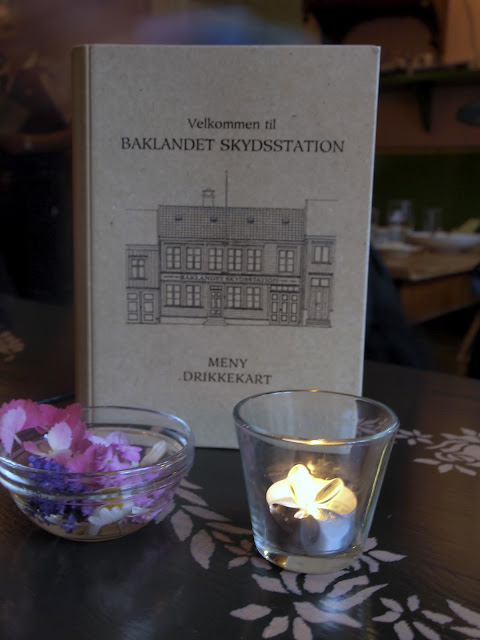 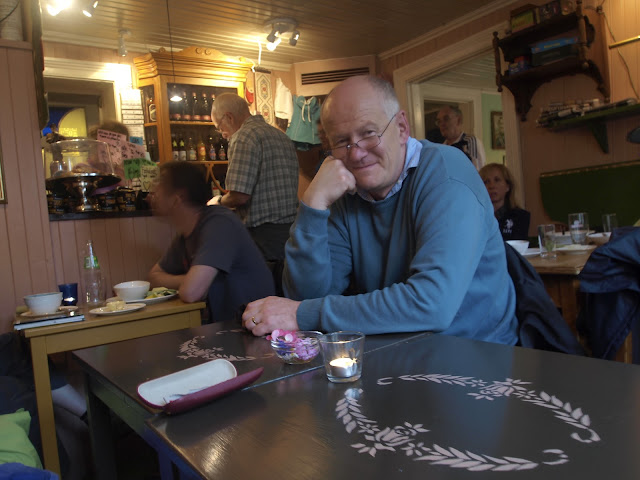 We wandered home taking the scenic route, over the old red bridge, arranging to meet the next day for lunch. 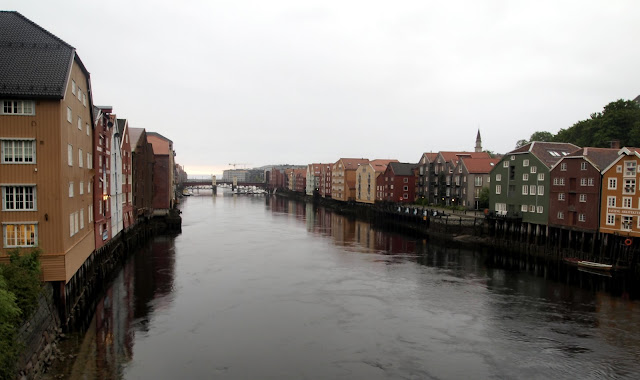 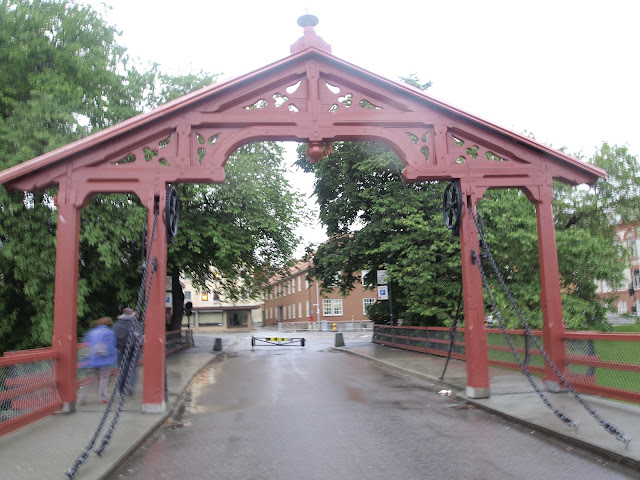