Back Troubles and TLC?

It's been a funny old week. One thing for sure, my body is falling apart! Tuesday I turned to reach for something on the kitchen counter when my back went. I don't know what happened as I certainly wasn't overstretching. I think it just went into spasm.
I used to have a similiar problem, it occurs most frequently when I'm teaching the smaller children and am constantly bending down to talk to them or work with them. In recent years, I've learned to bring them up to my desk or to get right down on my knees instead of bending.

Anyway, after my usual breakfast with Metin, I walked very gingerly back to the house and decided a couple of hours bed rest was in order. I did some breathing exercises to relax the back but wasn't having much luck. The next thing there was a knock at the door, well actually two knocks, by the time I got downstairs. It was Tuğce, a young Turkish girl I have been helping to learn English and also to swim. İ explained what had happened and no lessons today.

I then hobbled back to bed, I even contemplated lying on the floor. At times like this it would be so helpful to live in a bungalow! I rang Metin and told him the promised dinner that evening would not be forthcoming, İ was not cooking today.

My friend Gülsüm rang to invite me to dinner. Unfortunately İ was not in a position to accept. What do you know, half an hour later another knock on the door. 'Meals on Wheels' had arrived. Gülsüm had arrived to feed me. Seeing the difficulty İ had standing up or sitting down she immediately offered to bring me to the doctor. I told her İ would be fine. rest and drugs would do the trick. In the meantime back up those stairs.

A little later Metin rang. The penny had dropped. English Gent had seen my terrace door open but there had been no sign of me all day. He was asking everyone if they had seen me. Metin said İ had rung him to change our evening plans. He thought İ had gone to Gülsüms. Peter insisted that if İ had gone İ would have closed the terrace door as usual. Hence the phone call. Then the lecture, 'Why hadn't İ said İ was hurt, Was İ ok? What did İ need?  Get the picture? Guess why İ didn't say anything? Then he informed me he was coming. But I could hear rapid Turkish in the background. Ankara Lady. Did İ have any painkillers etc.

Thing was İ wasn't in acute pain just moving about was difficult. İ told Metin if he was coming to use the spare key. I couldn't face the stairs again. Then İ was told it was Ankara Lady that was coming. I just had time to thank the Lord I had spent the last week giving the house a really good clean. Probably why my back decided to act up. It is allergic to housework!

She couldn't have been nicer. She brought anti-inflammatory jel and painkillers with her. I was one step ahead of her,  while on the horizontal of course. İ'm a veteran now. İn the past year İ've had rotator cuff tendonitis in both shoulders, and a frozen shoulder at the same time. More recently, my knee has been giving me jip. And İ'm only 53:-(((((

İ was well supplied with anti-inflammatories, tablets and jel, and of course Nurofen plus. She insisted on applying the jel. My impressions of this gentle lady have now changed forever. Don't ever cross this woman. She has hands of steel. She applied the jel and starting rubbing it in gently. İt was so nice but İ was being lulled into a sense of false security. Then she began to massage the painful area. By the time she was finished, İ was biting my lip. My head firmly buried in the pillow to prevent me disgracing myself. Ankara Lady, offered to bring me food. İ assured her İ had been well supplied. She left only when sure İ was well looked after.

As she left İ began to feel very sorry for myself. İ'm so selfish. İ have 'only' two weeks holidays left and İ resented being laid up for whatever small part of that time. I have things to do and places to go! The eyes were definitely watering when Metin appeared at the door, flowers in his hand and apologies for not realising earlier I might be in difficulties. That really made the tears flow. At home, İ'm the caregiver. İ can't afford to have a meltdown. Too many people depend on me to be strong. Here it is the opposite. Here İ am the one that is looked after and fussed over.

İ have been pampered and cosseted by my friends for the past four days. Tuğçe,s Mam has even text to see if İ am alright and if she can do anything for me. İ have not had to cook until today. My meals have been delivered. Now I have almost completely recovered. Yesterday İ swam slowly for half an hour and today İ went to yoga for some gentle stretching. There is only one thing left that must heal.

The bruise, the size of a plate, that Ankara Lady's tender ministrations bequeathed me! 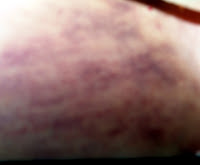 She was mortified when she saw it. İ told her not to worry, İ got better quickly because of her massage but İ will never cross her in the future. She tried to kill me. She contends it was a very gentle massage, it is my tender white skin that is not used to being massaged.

Judge for yourself!
Posted by Maryhocam at 11:23 PM