I had planned my early morning walk around Amasra. As Hubbie and Sis-in-Law wanted to sleep, Metin decided to escort me. I don't need an escort. Ever since I got over the initial feeling of foreigness when I first came here on my own, I have felt totally safe walking around by myself.  I'm not foolish and wander round after dark but in the daytime people fall over themselves to be helpful. But Metin shares the same love of photography that I do. He is also used to being up early, hence the offer to be my escort.

I usually tap on his door about 07.30 and we set out. I often lose him on the way. He is a man and a lot more practical about taking photos than I am, one shot of anything is enough. He takes photos as mementoes rather than trying to capture exactly what he sees. We gave him a small Canon Powershot camera three years ago for his thirtieth birthday and it goes everywhere with him. It takes surprisingly good photos and of course he has a "good eye"

This morning to my surprise there was a light tap on our door at 07.00am. I got up quietly not to disturb Hubbie and sure enough there was Metin outside the door. I thought he had come to collect me for our walk. He was dressed but looked the worse for the wear. He wanted to know if we had any water in our room. He had been horribly sick throughout the night and was now totally dehydrated. He had been waiting until he thought I would be awake.

We have always said he is like our son and this morning certainly proved it. He was like a little boy at our door looking for his Mammy to come and make it all better. I got him back to his room, went out and bought him a large bottle of water and gave him Motilium tablets to settle his stomach. Then to his embarrasment and relief I sorted out the mess in his bathroom. We were facing a four hour drive back to Ankara and then the flight to Bodrum. What a nightmare for him.

Ten minutes after the "magic tablet he was feeling better and insisting he was well enough to go for a walk. I told him he was crazy and to rest up until we had to check out. But no, as usual mammies know nothing and He-Man would feel better if he got some fresh air. 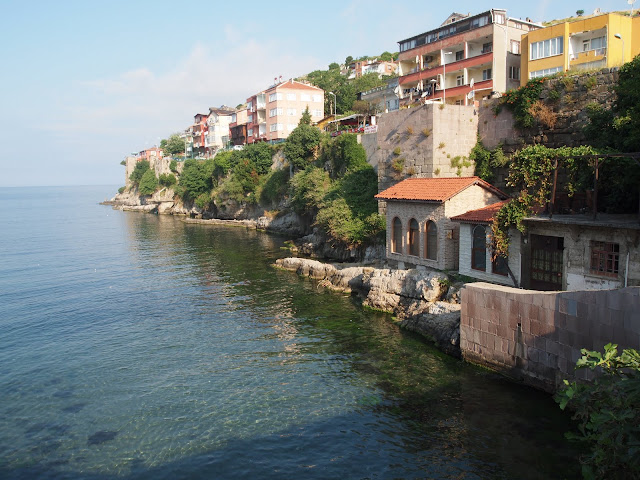 This is my favourite time of the day for walking and the town looked better in the early morning sunshine.  No crowds, just some of the traders setting up shop. Unfortunately the cleaners still hadn't been to work.
We made our way to the castle and I could see that He-Man was beginning to flag. I wanted to go back to the hotel but he told me he would sit and rest and I could come back for him. 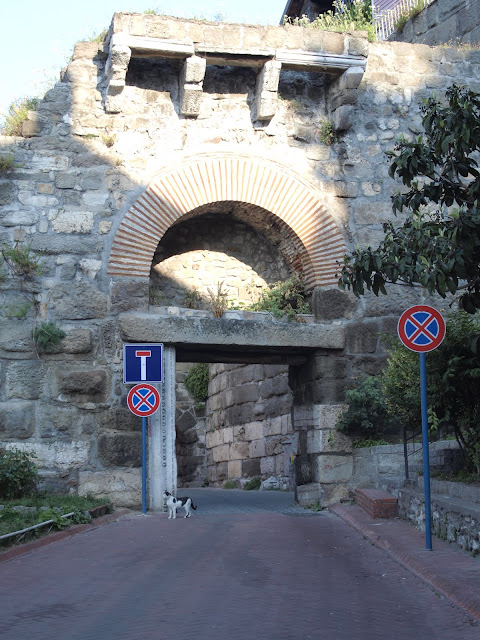 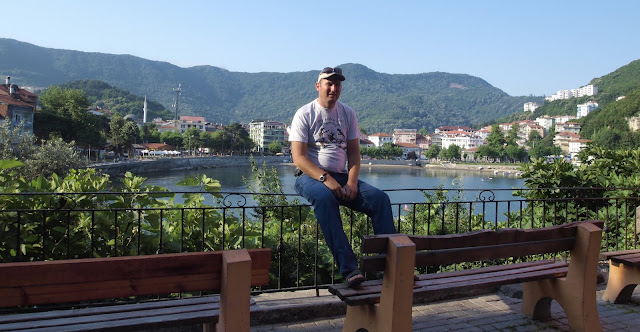 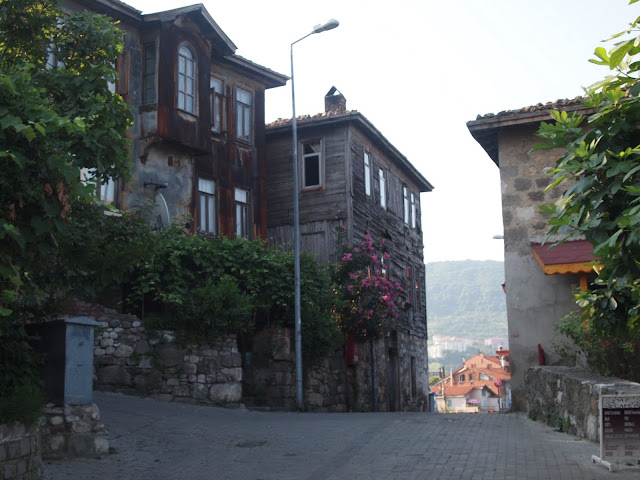 He sat near an old lady. I asked permission to take her photo and then I head off. When I came back they were both waiting for me, with a hundred questions. This lady was a throwback to a different era. We chatted, and Metin and herself discussed changes in language over the years.

The next thing we heard a mobile phone was ringing. The old lady reached up under her jumper, and there  on a belt, in it's own leather pouch was her mobile phone. She had a quick look and switched it off.  Metin, being Turkish, had to know the ins and outs of everything asked who was ringing her. She said it was her family back at their pansyion. They wanted her back to work. She carried on with the chat. The phone rang again. Once more she reached under her jumper and switched it off. She didn't move from her perch on the wall until we moved off.

Metin was flagging visibly. When we got back to the hotel the power was still off so he had to walk up 4 flights of stairs. Got him safely to his room and told him to sleep. There were no arguments this time.
I met up with the others downstairs. We thought breakfast was in a room off reception. When we got there, it turns out it was on the terrace .....on the fifth floor and the electricity was still out. It was a lot of stairs. I had been up and down them like a yo-yo.

I told them about Metin. Sis-in-Law, while genuinely feeling concerned for him, was grateful that in the restaurant the previous evening when handed her plate with sea bass, she politely passed it on to Metin. She took the second plate. If not, she might have been the one in the bathroom all night!

We had to check out at eleven, the electricty was back, so we didn't have to haul the bags down the stairs. I went to pay the bill, but the machine for processing the Visa card was still not working. So it  was out the door to look for the nearest ATM. Luckily it was working. I'm sure Metin didn't fancy washing dishes for the next week and neither did we.

We settled our bill and made our way back over the mountains to Ankara. From there it was a short flight back to Bodrum. A short but very interesting trip.

Where next you may ask? I feel Gallipoli calling, but that will be next year.
Posted by Maryhocam at 6:07 PM