Bob Kelly and His Teletubbies suitcase!

Yesterday we arrived in Manchester and we greeted by our English colleagues. Waiting with them were our colleagues from Spain. The Polish contingent flew into Liverpool and arrived at approximately the same time as we did.

The Turks had an adventure on the way. They arrived earlier minus their suitcases. They had travelled by overnight bus from Kayseri to Istanbul, a twelve hour journey. They arrived at check in with just a short time to spare. The airline  refused to take their bags as the plane was boarding. Their first introduction to Manchester was a trip to Tesco's to do some shopping for the coming days. Their bags are not following on!

Speaking of luggage, Neady, my colleague, had the onerous duty of bringing a Teletubbies suitcase as hand luggage. The suitcase belongs to Bob Kelly, an 18" high yellow rabbit, who has his own passport and managed to wangle his way onto the trip.

Unable to manage the case himself, he batted his eyelashes at Neady and had her carry the bag for him. She swears never to do this again as it elicited all kinds of looks and comments as we made our way through airports, onto planes, into taxis. Why was a grown woman carrying her hand luggage in a Teletubbies suitcase??? 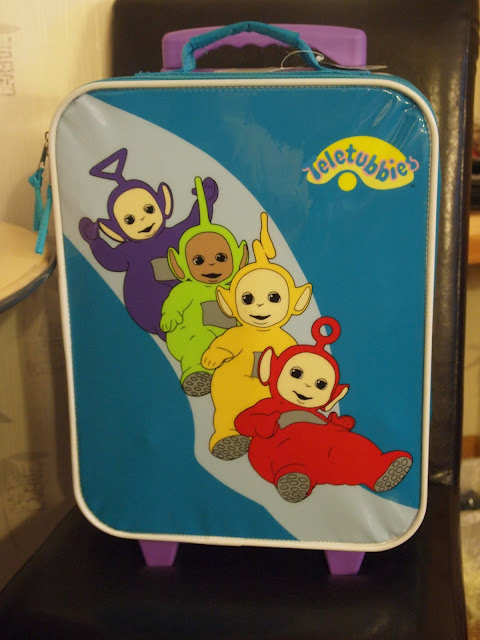 Bob is a student in fourth class but has decided to move to Manchester to go to school there. He has brought his diary with him, outlining events in his life since this school year began. He suffers from "itchy feet" and has spent each night staying with a different classmate. Well, you know, rabbit families tend to be large and there wasn't much room for him in the burrow. He also tends to be a little scared of the dark.

Today his adventure begins as he meets with the staff and students in his new school. Let's wish him well.

Posted by Maryhocam at 9:56 PM