It's been a while since I've written a new post. For some reason my heart wasn't in it, possibly due to tiredness. Maybe it is due to the dreary weather and the days getting shorter, It certainly wasn't due to the lack of writing material. So I decided to pull myself into the corner by the scruff of the neck and give myself a good talking to. So here I am, I'm writing a new post and over the next week I'll begin to catch up on my reading. My apologies for my absence. I will get back to reading your blogs now.

Where to begin, the trip to Manchester? Opening my Facebook and seeing my daughter's post saying she had a bad day, involving a missing car, a pipe bomb and having to walk home? Or the recent tragic events in Turkey, the ongoing Kurdish problem that led to the deaths of 26 Turkish soldiers in Hakkari followed by the devasting earthquake in Van?

I suppose I should start at the beginning, with our visit to Crossgates Primary School in Rochdale. Of all the schools I will visit on our project "Our Place in Space" the prospect of visiting this one was the least exciting for me. Perhaps because England is such a close neighbour it didn't have the same "romance" as a trip to Seville" But what a trip! I was  so wrong.

The evening we arrived we had time to go for a walk around Hollingworth Lake. 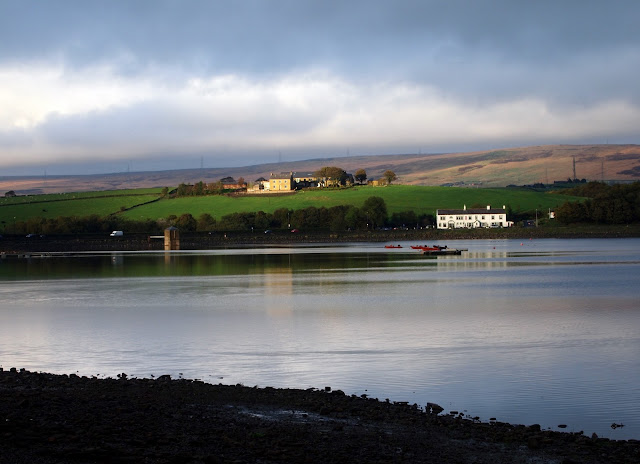 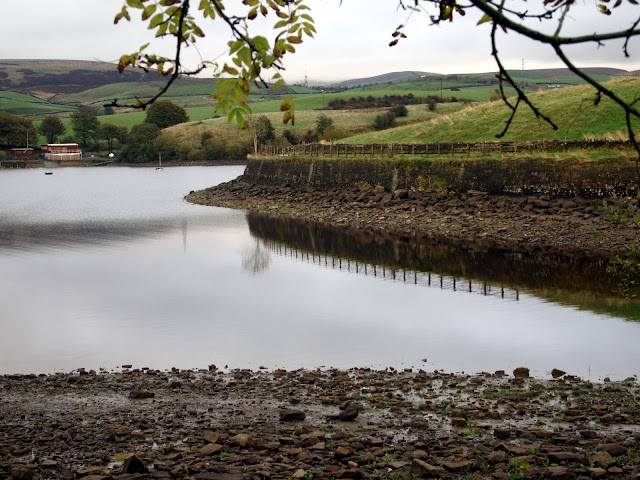 The school was very interesting to see. The classrooms are open, there are no doors, yet there was not distraction of noise that I expected. Everywhere there was evidence of the children's work and photos of them having fun. They are taught their rights and that this brings responsibilities. They have a student council that are involved in school decision making, e.g. playground design. They are given an annual budget and it is at the discretion of the school management how this money is spent. 80% of it is spent on staff. The school was a credit to it's principal and staff. On entering the door you felt the warm friendly atmosphere that pervades the school. 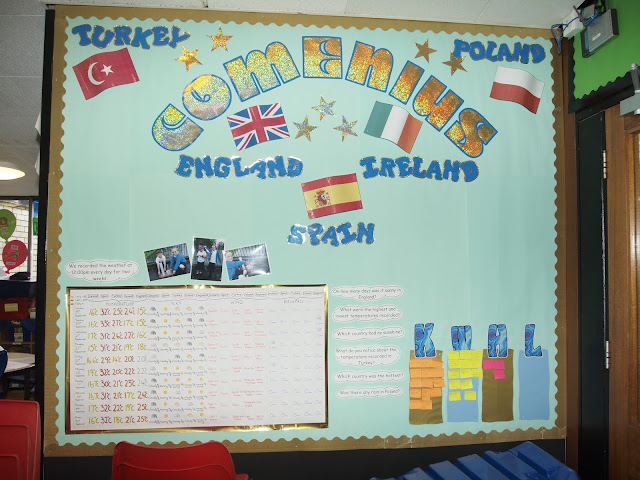 It was also interesting to observe the different group dynamics. It was difficult for some of the group as they only spoke their native language and they had to talk through their english teachers.

The Spanish were great. Lots of fun and dying to talk. The newest member of their staff had often been to Ireland and amazingly had starred ( as an extra in an Irish language soap opera Ros na Rún) His sister is married and living on the west coast. Her sister-in-law works for TG4 an Irish language tv channel and he was roped in whenever they needed a "foreign-looking" extra. 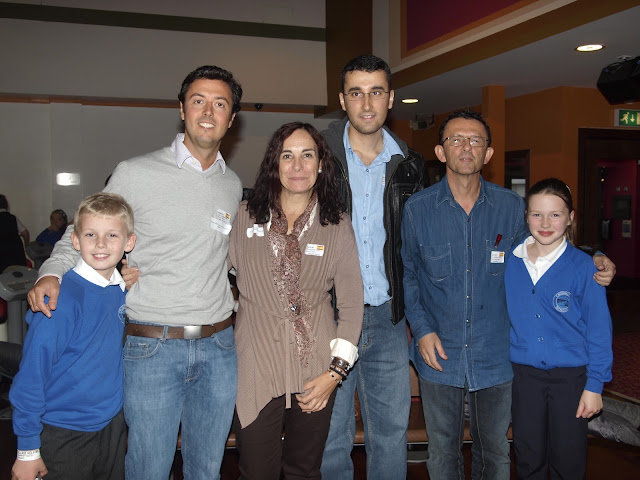 The English were perfect hosts, mingled and chatted to all. They were delighted to show us their school and their area. I think if Kay and I lived near each other we would have some good times together. 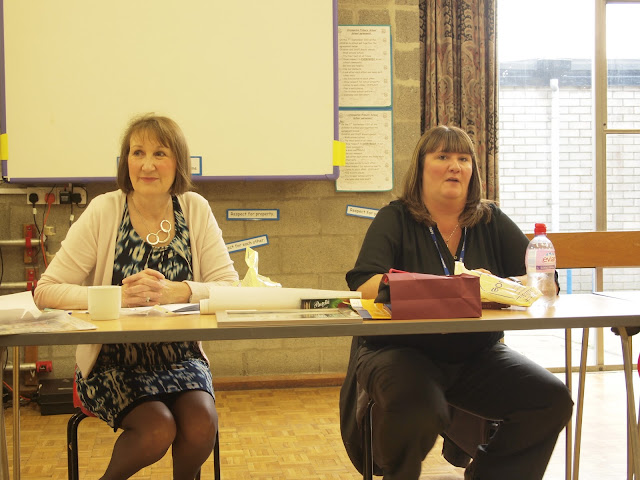 The Turks were delighted with me. We could talk and I could interpret for them. It let their English teacher off the hook. He could go and talk to the Spanish while his colleagues struggled with the language and the food. To find someone they could communicate directly to was a welcome surprise. It was the first time two of them had travelled abroad. They had been warned that the food in England was inedible so they had filled their suitcases with Turkish delicacies such as borek and sarma. Unfortunately due to a late arrival at check in in Istanbul their suitcases had to stay behind. To be honest it was a head swelling occasion for me. Everyone was surprised at my apparently seamless switching from English to Turkish and there was even a couple of Irish words thrown in here and there. I'll have to watch it. People can die from swelling of the brain. 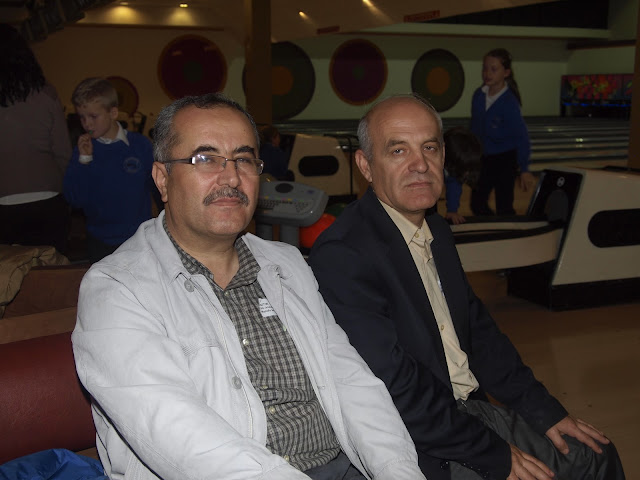 The Polish seemed to have a harder time mixing with the group but later a little birdie whispered that this might have had something to do with their principal being present. 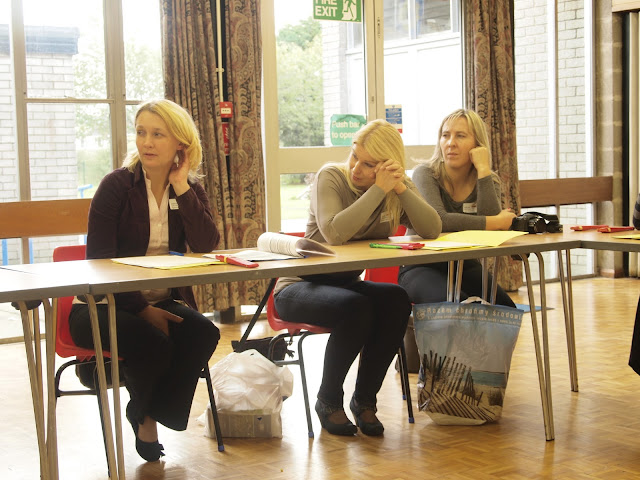 As for the Irish. Well, we were just looking for the craic in the evening. There were only two of us, but we split up to talk to as many as we could. By the time we were coming home we had the low down on everyone. 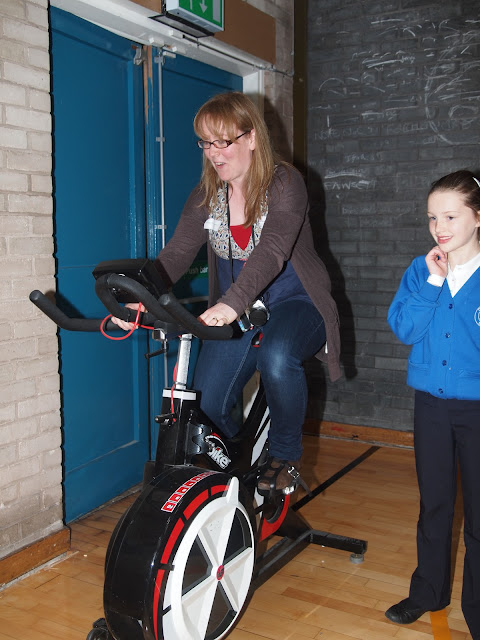 Posted by Maryhocam at 3:52 AM