This is the last post in the Manchester series. I'm behind with my posts. I took a break for a while, both from writing and reading. But I'm back in the swing again. Hopefully, I will be able to keep up with the writing and I've started my blog reading again.

On the last morning of our Comenius visit to Rochdale we had a brief but informative tour of Manchester. The history of Manchester is very interesting, here are a few brief facts.


In 1996 an IRA bomb devastated the city centre. There was no loss of life, as a warning was given. But approximately 200 were injured, mainly by flying glass. The immense damage done to the surrounding buildings led to the total regeneration of the city centre. It is tough to stand in a multi -national group and to hear how a small group of fellow countrymen had wreaked such devastation on the city. Keeping our counsel, we were surprised to hear our guide say that many feel the bombing was the best thing that happened to the city as without it, it is doubtful whether the investment by private investors and government would have happened. 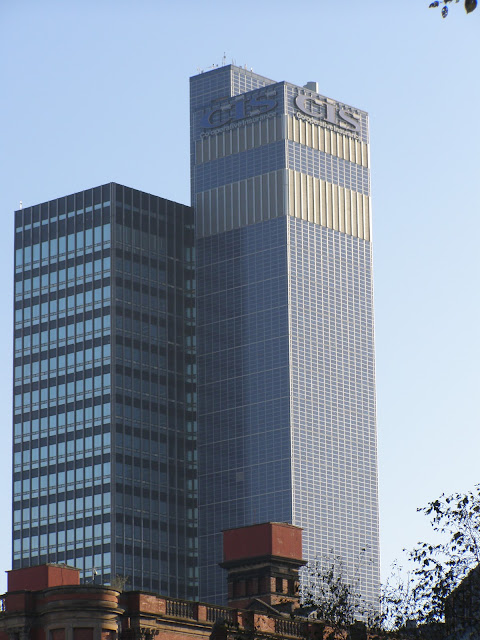 Our tour was cut short as some of the group wanted some time to go shopping and the Arndale Centre, the biggest shopping centre in the UK was temptingly nearby. I had no desire to shop. As I'm off to Turkey again on Saturday, and I'm hoping to do a photography workshop next month, my credit card needs an intermission.
Neady and I decided to head for Starbucks to fortify ourselves with a decaff tea and a strong cup of coffee before we headed for the shops. As it was after 11.00a.m it was safe enough to ring the daughter to catch up with the pipe bomb story. She would be awake and conscious enough to talk.  No-one will ever accuse our family of being boring!

I had an hour to kill so I decided to wander around Marks and Spencers. Bad idea!!!! I thanked the Lord I wasn't flying Ryanair with their 15kg baggage allowance as I now have now added three new dresses, a pair of jeans and a new top to my wardrobe. But €15 for a new dress, how could I pass it by???

Next, we set off for the ballet. We met the rest of the group outside the theatre. We were booked into the matinee to see Strictly Gershwin performed by the English National Ballet.When I looked at our tickets I noticed it stated that there was restricted leg room.  Now, I'm known as Bridget the Midget by my loving daughters. They tower over me. I'm of average height at 5'4". I'm tired telling them that best goods come in small parcels. I'm sorry they were not there sitting beside me in the theatre. I would definitely have proved my point. I had no room for my legs. They would have been eating their knees! I felt sorry for Carlos beside me. At half time, he made a bolt for the empty seats higher up. This also gave me room to stretch my legs.

The leg space was not the only problem in the theatre. It was warm, nicely so, and dark. The show was excellent but try as I might  my head kept nodding. I didn't want to miss a minute of the performance, but all the going of the past few days, the late nights and the "strenuous" shopping hour all took their toll. I was mortified. Kathryn, who had gone to so much trouble to organize an interesting and varied programme for us, was sitting directly behind me. Dear God, she would think I was bored. I was quite relieved when some of my companions admitted to the same thing. Several of us were nodding.

After the show we took the train back to Rochdale. The Turks were amazed at the orderly queue of people off the train and then waiting patiently to get on board in an orderly fashion. One remarked that this is something you would never see in Turkey. The concept of "orderly" queue does not exist.

After a brief rest, a change into one of my new dresses we came together again for our "last supper." It fell to me as project coordinator to thank Jane and her colleagues for the wonderful visit. Then it was hugs and kisses all round as we wished each other well and promised to meet up in Seville in January.

A 04.30 start the next morning saw us on our way to the airport to catch an early flight home. It's only 3 months to our meeting in Seville.
Posted by Maryhocam at 7:39 PM