I wrote this post a couple of months ago but never got around to editing it. Even now the editing is pretty rough. I'm heading off on a new adventure so I thought I would post this before a begin my new chapter.
I brought Mum out to Bodrum for the month of October. I wanted her to feel at home, to relax and enjoy her time with me. She is 87 years young. Lately it seems that she has been surrounded with bad news, this friend is sick, that friend is dying, so a break from all that would do her good. It must be very difficult to be the only one left of your family and to watch your friends go, one by one.

Mum loves company but also likes her own space, so I prepared her room. She likes to say her prayers in the evening time, so I borrowed a tubby chair from my friend Metin, bought a coffee table and table cloth, gathered up some of my nice candle holders and placed them all in her room.  She soon turned it into a nest,  to which she retreated every evening to pray.

Knowing how important her prayer life is, I planned to take her to the House of the Virgin Mary near Selcuk for Mass on the Sunday morning before we returned home. I had never driven this far before and needless to say, I was a little anxious. My friend offered to drive us and I was delighted on one hand and even more anxious on the other. I am a very bad passenger and definitely have trust issues.  The plans were made. We would leave on Saturday around half past eleven, this was allowing Mum to have her breakfast as normal, an easy start to the day. We would visit Bafa Lake on the way and stay overnight in Selcuk. I didn't book anything in advance because Metin would do the bargaining and probably get us a better rate.

Half past ten there is a knock at the door, Metin looking decidedly unhappy. There is work going on in one of the other houses and he has to stay to let the carpenter come and measure up. He told us to go ahead without him. But Mum was happy to wait. Half an hour later, he is at the door again. He has to help another house move furniture. There is no way he can make it. I'm driving.  This is the shiny new car. 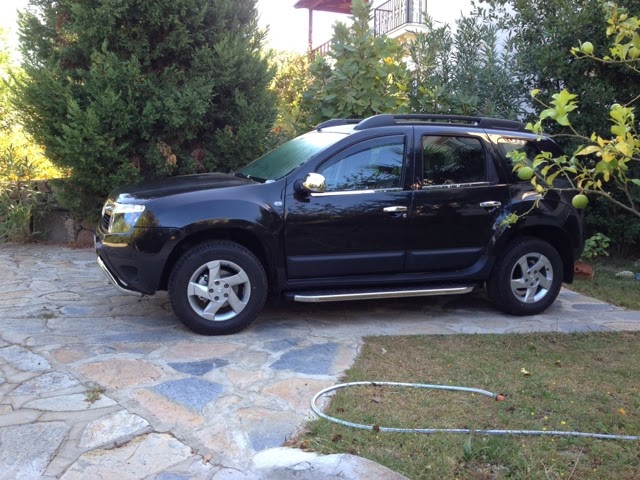 We headed off, with me hiding my trepidation. Mum thinks I'm fearless. Little does she know!  On the way I stopped to show her the Temple of Euromos. As long as I can remember, she loves heaps of stones.

Driving on from there we turned off for Heraklia on Bafa Lake. The road is narrow and twisty but beautiful. 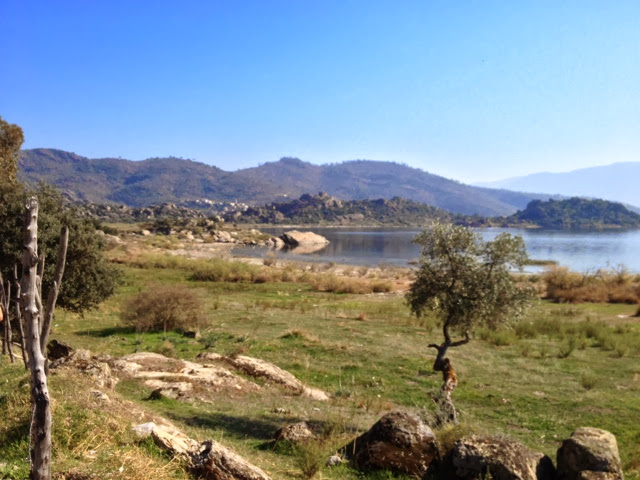 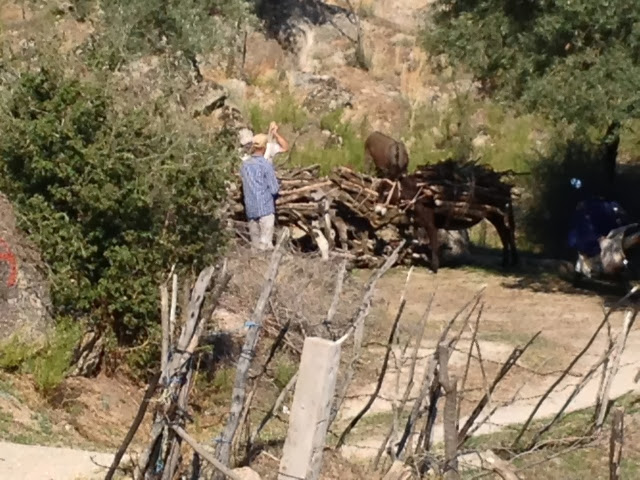 As soon as we parked the car we were surrounded by the village ladies wanting to sell their wares, beaded jewellery, tablecloths and other handcrafts. It was difficult to just wander and explore when you are being followed by a horde. So we headed back to the car and on for Selcuk.

I now had a new worry. I hadn't booked anywhere because Mr. Man was going to look after that. I would just drive into Selcuk and hopefully spot somewhere on the main road. Bad guess! There wasn't a sign of a hotel on the road in. But I am nothing if not resourceful! Maybe a little of Mr. Man has rubbed off on me. I had brought Mr. Man's wireless Internet dongle with me. I switched it on, took out my iPad and went immediately to Booking.com. I found a likely place not far from us, put the address into the GPS and off we went.

God was definitely smiling on me. We drove down a road  which led to a square with market in full swing.Vegetables and fruit of all hues on sale. Luckily we had to turn right. If not I was a goner, how could I have gotten around the market? There was one parking space right at the front door.  The hotel was set up for an engagement party that night but there were two empty rooms for us. The hotel was listed as two star, but our rooms were spotless, air conditioned, satellite telly and more importantly free wifi!

I didn't realise how tense I had been until we got to the rooms. I told Mum I needed to rest for an hour. My legs had gone to jelly. I spoke to Mr. Man, he wanted to know we had arrived safely. He was surprised I was on the net. He had got a message only a short while before to say that the wifi dongle Internet allowance was used up. There had literally been enough for me to look up the hotel and then it was gone!

The next morning we had breakfast at eight. Mum loved the tomatoes. There was no comparison to the tomatoes at home she thought, these were so fresh and juicy. A man at the next table wanted to fill her tea cup for her. She was old, he thought, and he was being both helpful and thoughtful. Little did he know that this " little old lady" is anything but helpless.

We checked out and headed up the mountain to the House of the Virgin Mary. It is supposed to be the place where she last lived, with the apostle John. A German nun, Catherine Emmerich, blind from birth is said to  have had a dream and described the place where she lived. Years later, it was excavated by an archeologist and they found the ruins of a building. There is now a small church built on the site and hundreds of tourists come everyday to visit and pray.  It is sacred to all "people of the Book"

Every Sunday, at half past ten there is mass said here at an outdoor altar. We arrived in time and took our places. W met a lot of Irish people who were staying in Kusadasi and they too had come specially for the Mass. It was a lovely experience sitting in the sun, watching a squirrel run around the roof of the chapel and launch himself off into the nearby tree. 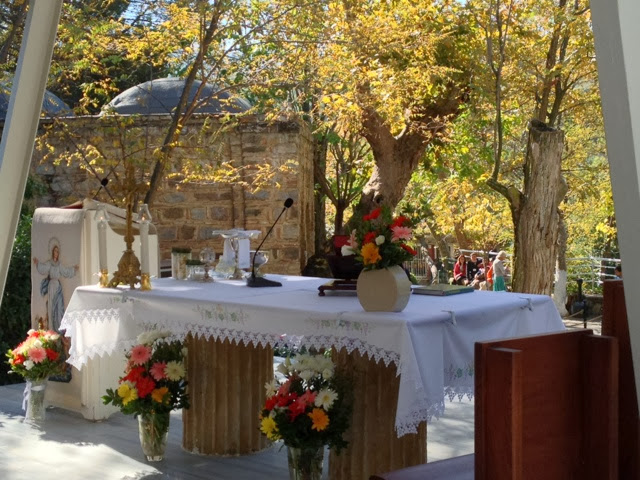 My last job of the day was to light some candles for my friends requests. 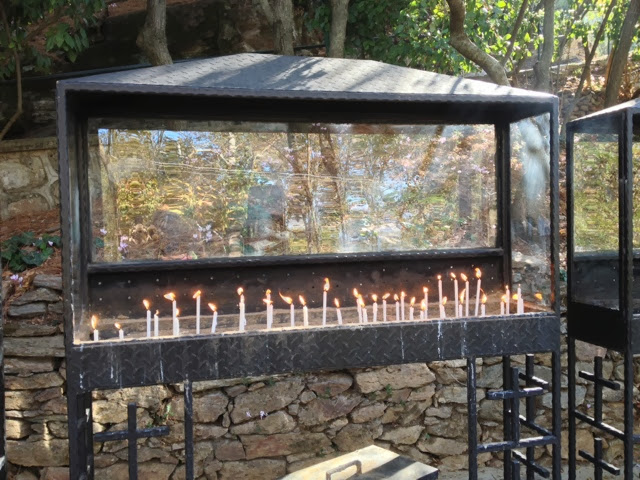 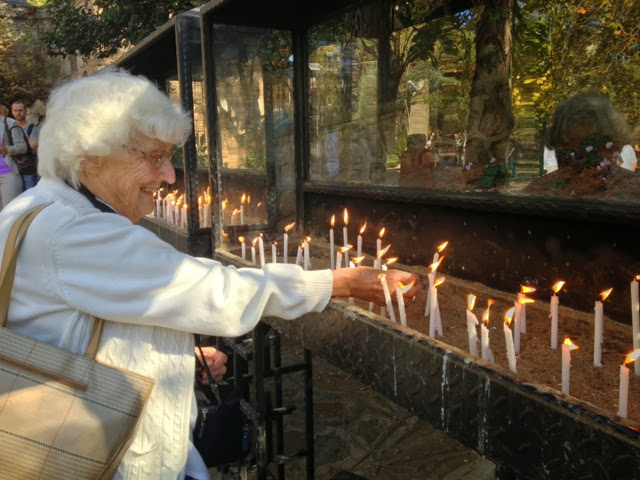 Mum also lit candles for her friends intentions.
This done we drove down the mountain again, mum came to grips with her first pomegranate juice before we set off for Bodrum. 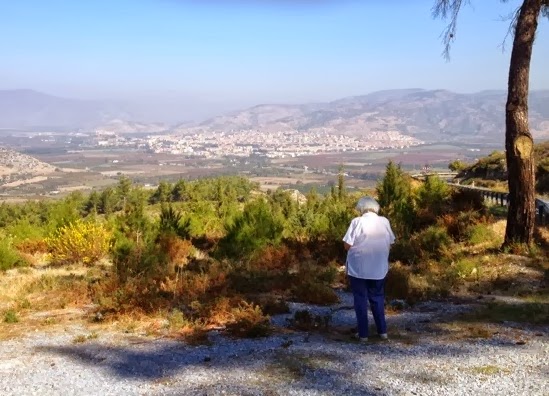 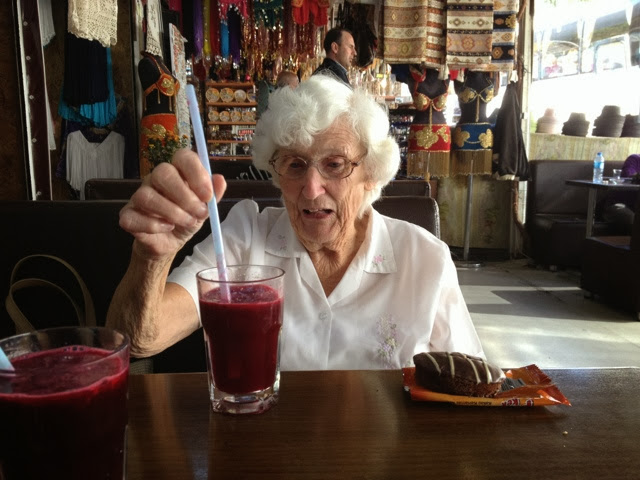 I hadn't been looking forward to the drive, but now one more fear  is conquered. I know that if I take my time, drive defensively, I can tackle the Turkish roads.  Actually the roads are good...the main ones anyway....it's the drivers that inspire total terror!