After the excitement of the microlight flight it was back down to earth. We decided to take a tour of the old centre of Safranbolu. We travelled on a very sedate golf cart. There were several options. We chose the mini tour which lasted 45 minutes with an English commentary.  It was great value at just under €4 per person.Our driver/tour guide spoke English though he played a recording at some of the stops. However, he usually elaborated on the recorded information and answered all our questions. 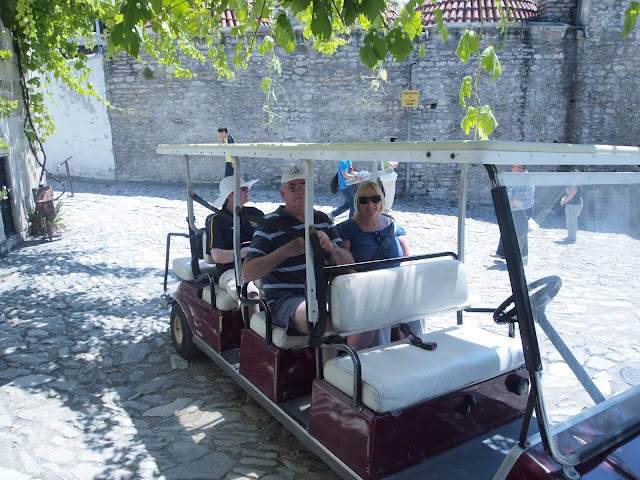 Some of the interesting information.
The cobbles on the street all seem to run to a central channel, this was to take the water to the rivers. Also every 30m approx, there are three holes, this is also the drainage system. 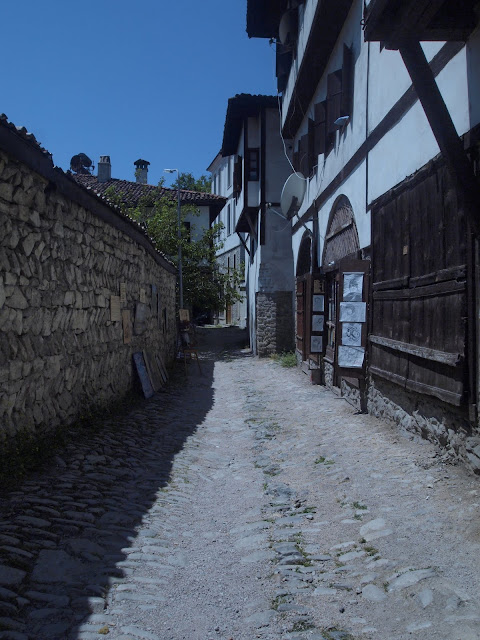 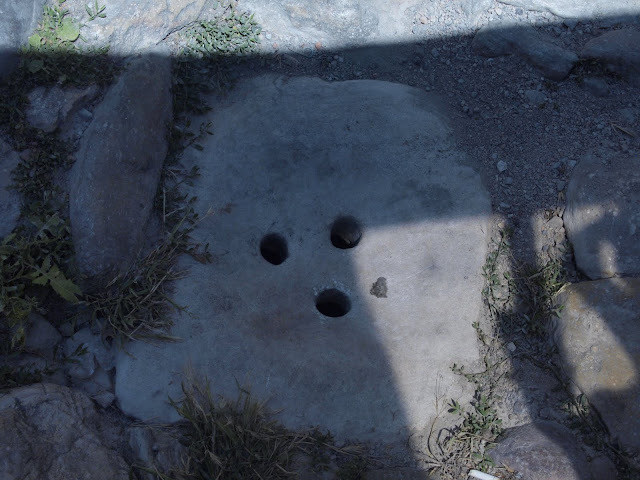 We passed two hamams, one still working. People usually visited the hamam once a week and it was an all day affair, as they washed, ate gossiped and sized up potential suitors for their children. The hamam that is still working has separate quarters for men and women. This is often not the case with different times being assigned to men and women.


The geological formations show that this area was once covered by sea, however earthquakes caused the sea to drain away and we were left with the present day Safranbolu. 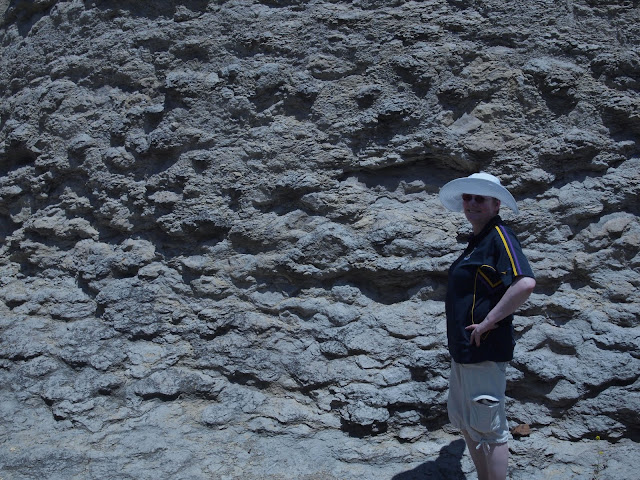 Town planning was done carefully. The tannery and the saltworks were place close to the animal market so that goods did not have far to be ransported. The tannery workers had their own mosque beside the tannery so that the workers, who would have smelled strongly from their job would not offend the delicate nostrils of others as they kneel to pray. 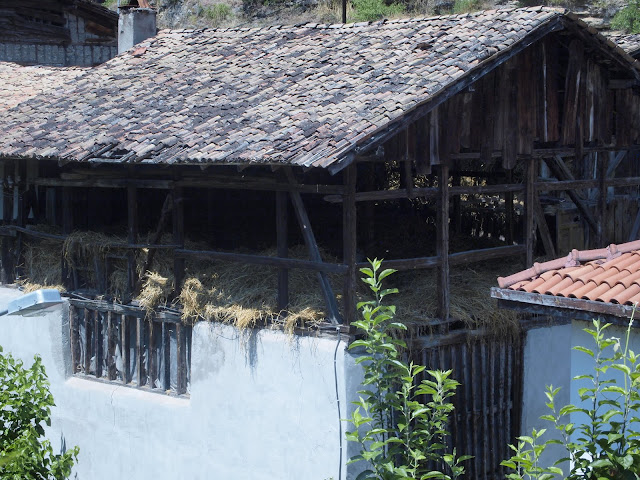 Everywhere there were beautiful fountains. The fountains were built for inside the house but they usually placed a tap outside as well for the passerbys


After the tour we stopped to get a drink. There were two adjoining tables, and while we made our way to the empty one, Metin made an immediate beeline for the table where a beautiful Korean girl was writing in her notebook. 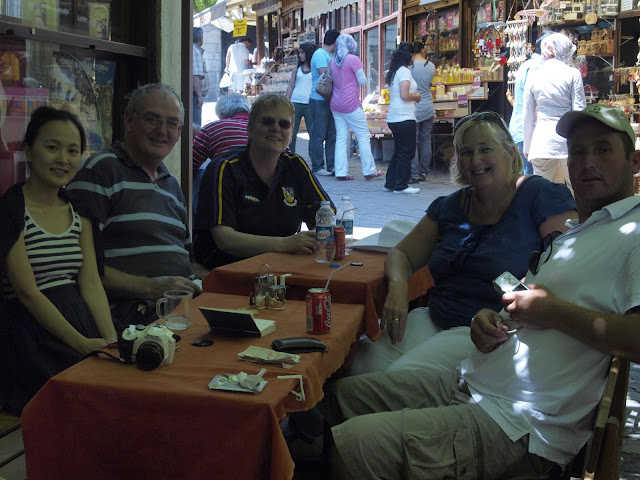 She had only just arrived in Turkey. She had quit her job and was travelling around Europe before returning to Korea to look for a new job. She was travelling in her own but had plans to meet her sister in Greece, see some of the islands, travel on to Venice and then back to Turkey.
Metin was encouraging her to visit Bodrum instead of Marmaris and he would show her around on his motorbike. He paid for her meal and lives in hope of an email with her change of plans.

We split up in the afternoon, Hubbie and Sis-in-Law going to see the museum, while Metin and I wandered and did a little shopping.

Every corner we turned we were invited to taste the local lokum, Turkish delight, saffron flavoured of course. We also tasted helva. There were people in the street just waiting to tempt us with free samples and then entice us in to buy.We had a great conversation with the helva shopkeeper. He is now retired. He spent his years making the helva. Now that he is "retired" he is selling it. I bought one box for my friend, the other for ourselves.  Remind me never to buy it again. Unfortunately, I was the only one who liked it. One piece at a time is plenty as it is very sweet but it leaves the taste of more.  A minute on the lips, forever on the hips! How will I ever lose weight with so much to tempt me?
In addition to tasting helva and lokum I was intrigued by the Macun seller. I had never seen this before. It dates from Ottoman times. It is a thick sticky paste, it comes in fruit flavours and it is wound around a stick like a lollipop. It is actually like a lolliop that hasn't hardened yet. I had to try it, it was seriously sweet and I feared for the few teeth that I have.

Meeting with the others again we set out for Yoruk Koy. Metin had seen it's location from the microlight so he "knew" the road. After several stops to enquire, we found ourselves on the most roundabout road to the village possible.

This was a truly lucky happenstance. As we left one village we heard the sound of drums. There were people drumming and dancing in the street. I immediately asked Sean to stop as a couple of the men were in traditional costume. He duly pulled in and Metin and I hopped out with our cameras. I asked was it all right to take their photos. They were happy to oblige, none of them wanting to be left out.


I could feel the grin splitting my face as they danced and performed for us. A quick look at Hubbie and Sis -in-Law and it was apparent they were not feeling the love. The drums were loud and obviously grating to their ears. Yes they are definitely siblings!

Metin came back to tell me that it as a wedding celebration and we were invited in for something to eat and to join in the fun. All thoughts of Yoruk Koy left my head. What an opportunity!
However, by this time Hubbie was back in the driving seat and eager to be on his way. I told him about the invitation but he said we had to be on our way if we wanted to see Yoruk Koy.

The host approached me to invite us again but with regrets I told him, much as we would love to join them we had to be on our way. He had caught a glimpse of Sean's face and read the message there. I can understand him and Sis-in-Law as they don't have the language and are hesitant about trying new foods. But what a wasted opportunity.

We eventually found our way to Yorük Köyü. It is a village that continues to do things in the traditional manner. It is 750 years old. Yorük is a group of nomadic Turkish people. Metin  is of Yoruk descent. The name comes for the Turkish work yürümek, meaning to walk.
There is a car park as you arrive in the village and we left the car there as we wandered through the streets. Like Safranbolu, some of the houses are open to the public. We visited one and the lady of the house would certainly sell coals to Newcastle. She kept us entertained.
When asked about our unusual table, it looked like an upside sled but the top of it was indented with rows of sharp stones, she explained it was for separating the wheat from the chaff. Alternatively, she gave a graphic demonstration of how if Sean or Metin misbehaved it could be used for beating their behinds. She had everyone in stitches, laughing. She then removed her headscarf and donned Breda's hat. She reckoned she was now "süslü püslü' dressed up to kill.

Sis-in-Law got an introduction to gözleme, the lovely Turkish pancake. She has become a convert.

We met with several people in the courtyard as we ate. Interestingly one man was talking and mentioned that he was of Yoruk descent, from Muğla, about 20 minutes from Metin's home place. He was originally a tour guide but now is an English teacher in South East Turkey. He had a marked London accent. The two of them had a great chat about the Yorük culture and the different phrases etc. associated with it. He extolled its beauty and gave us his phone number in case we ever travel that far east.


We returned to Değirmenci Konak,  tired from another action packed day. I headed for bed and got a good nights sleep. Tomorrow is another day. We will set off for Amasra, once I have had my early morning walk and another delicious breakfast .