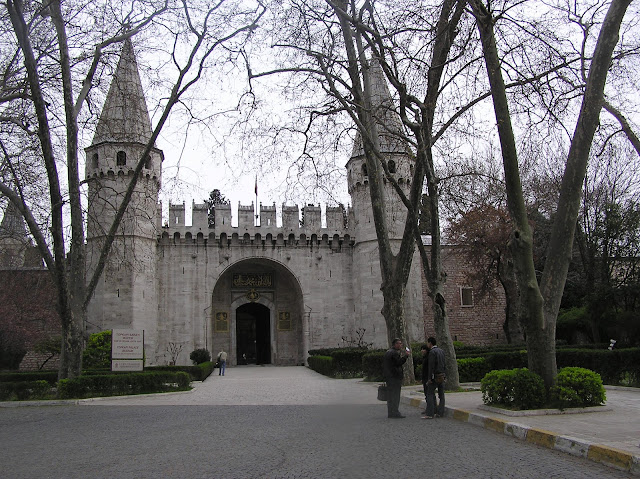 True to the forecast, we woke up to the spills of rain. Yesterday had been a long day so we had decided to have a late breakfast and then head off to Topkapı Palace. We had also planned to go to the Grand Bazaar. Last night I asked at the desk how long it would take to walk there from the Hotel. I was told normally 15-20 minutes, he would walk it in ten minutes but I would need two hours, at which point he collapsed laughing. I told him appearances were deceiving. I had grown up with five brothers and I could take him on anytime:-) 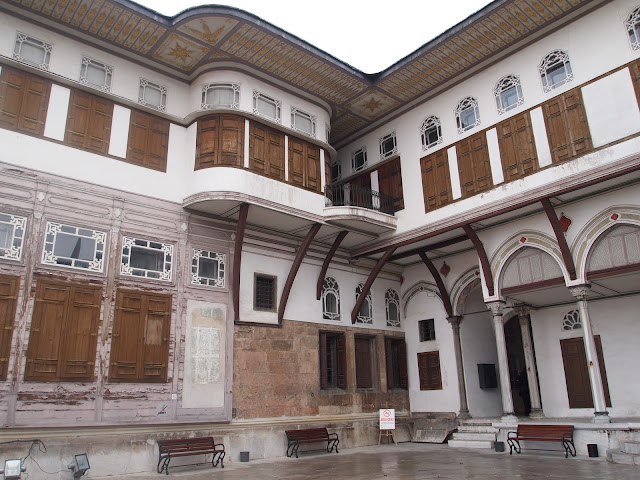 After breakfast we ordered a taxi to take us to Topkapı. We were told they were busy because of the rain and we would have to wait. The taxi arrived and we jumped in. I told him where we wanted to go and he threw his hands up, it was very close. At times it is handy to have Mum with us. I told him it was wet and my Mum was old. It was one fare he was not pleased with. He grumpily brought us to our destination.....no tip for him! 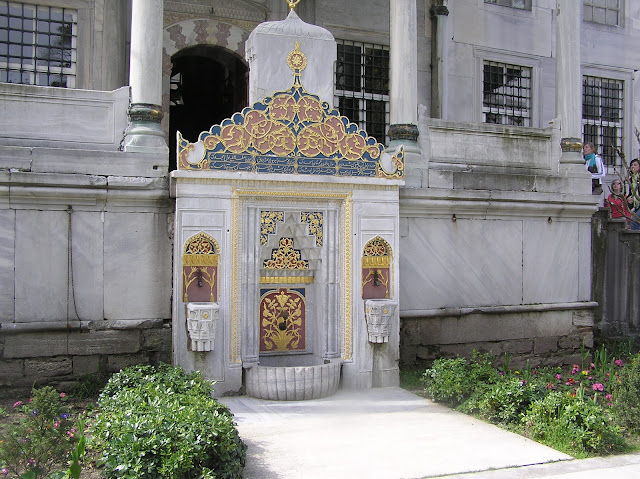 We got out and were immediately besieged by umbrella sellers. They were making a killing at 10 lira a go. However, we were prepared. I had bought umbrellas bearing the pink ribbon (supporting Breast Cancer Charities) at home. They folded up small enough to fit in any bag. 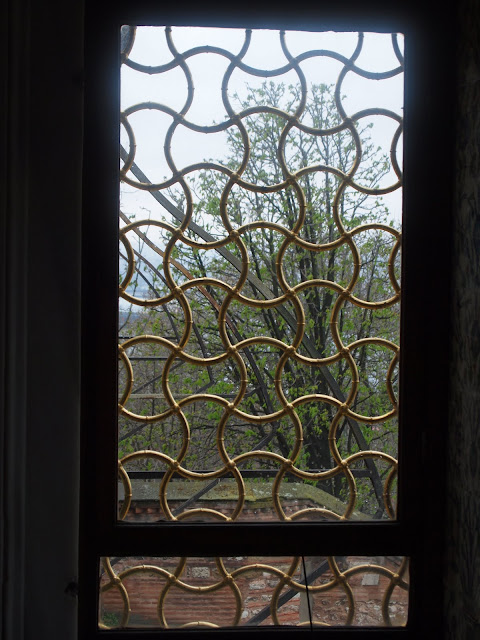 There was a long queue for tickets. I sent Sean to the queue and I went in search of batteries for Mum's camera. I then joined them in rain. Some jostled for place as they were getting wet but in general the crowd was good natured. I got talking to a German couple. They were in Istanbul to tango. They had a house in the West of Ireland and came regularly to fish. It's a small world. 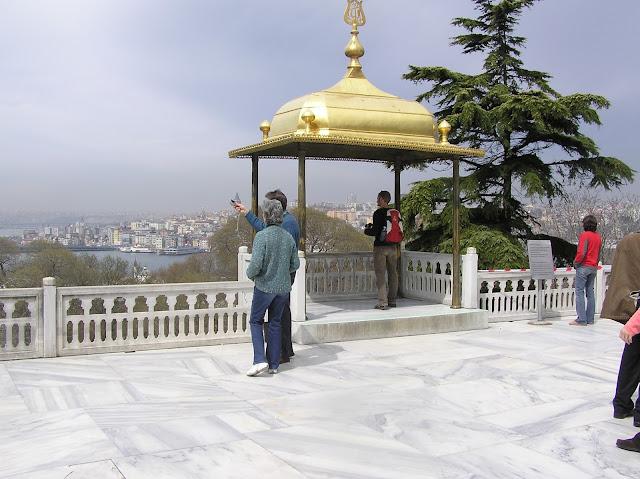 Then we passed through the entrance. Many of the tourist attractions in Istanbul have security scanners, through which you must put your bag. We decided that Sean would queue for the tickets to view the harem while we had a look at some of the audience chambers. The last time we visited, there were guided tours of the harem. Now, you must rely on an audio-guide or on the information posters, written in Turkish and English. 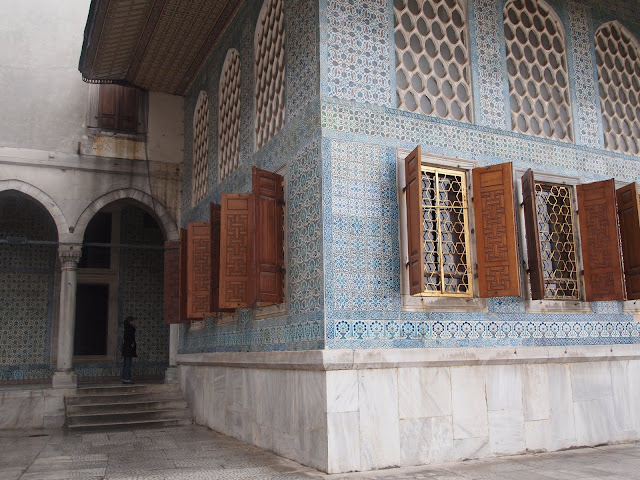 Life in the harem was not as I had imagined it. The harem was the family quarters of the Sultan. The women who served him were taught to read and write, to play music, palace protocol and ettiquette. After nine years service they were given their leave papers, some diamond jewellery, gold and a trousseau. Their lives were closely watched or a husband found for them. They were known for their good breeding and discretion. The walls carried suitable Qur'anic inscriptions, instructing  in the proper conducting of family life. 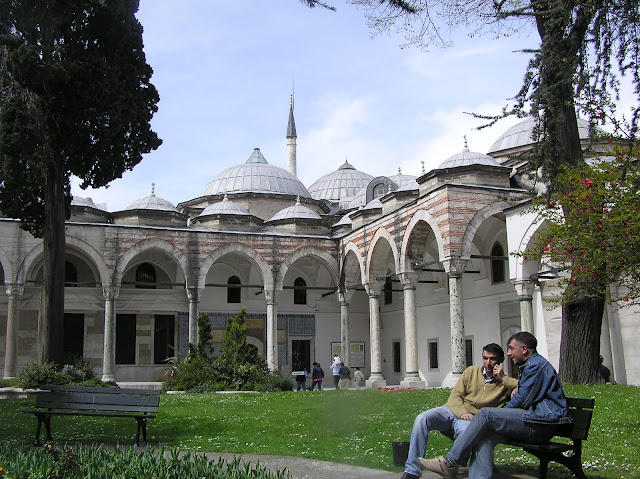 The grounds and gardens of Topkapı are beautiful but unfortunately because of the rain we did not see them at their best. I prefer Topkapı to the Dolmabahçe Palace. Dolmabahçe is impressive but it is like many European palaces whereas Topkapı immediately takes me back to a completely different era. The İznik tiles are amazing. If you are going to visit the Palace, make sure you pay the extra money to see the Harem 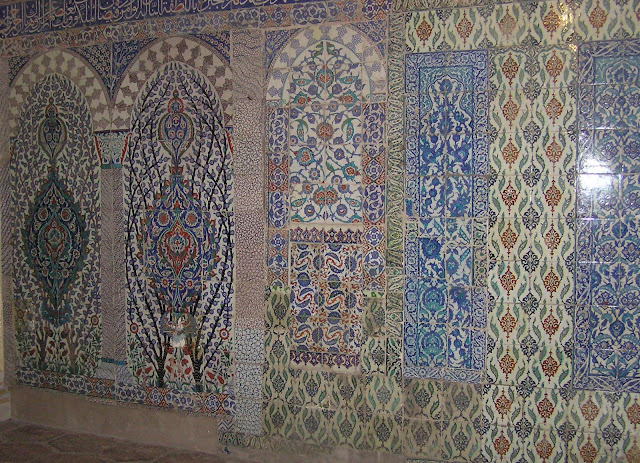 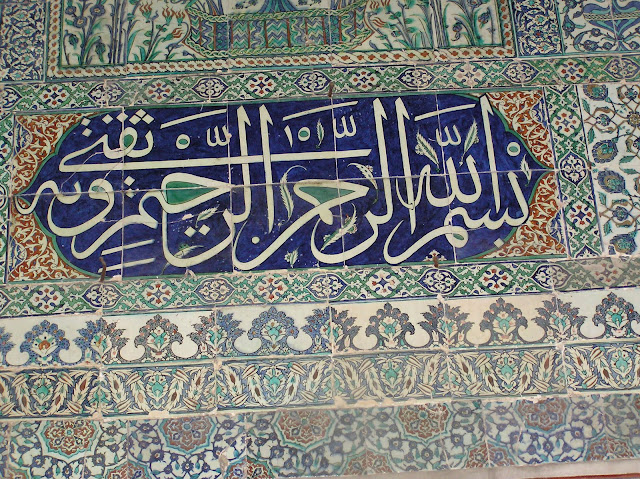 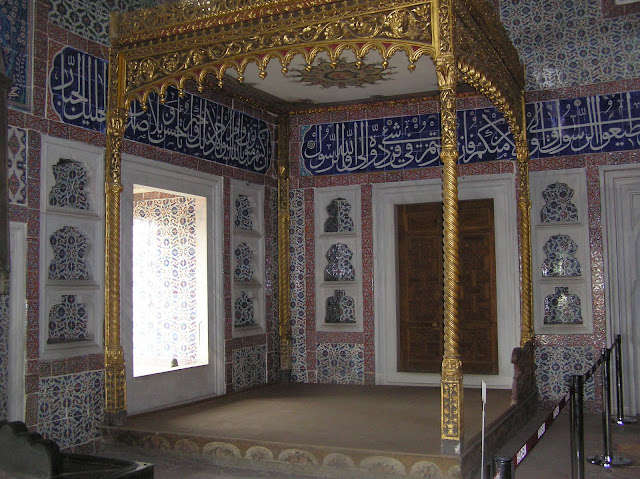 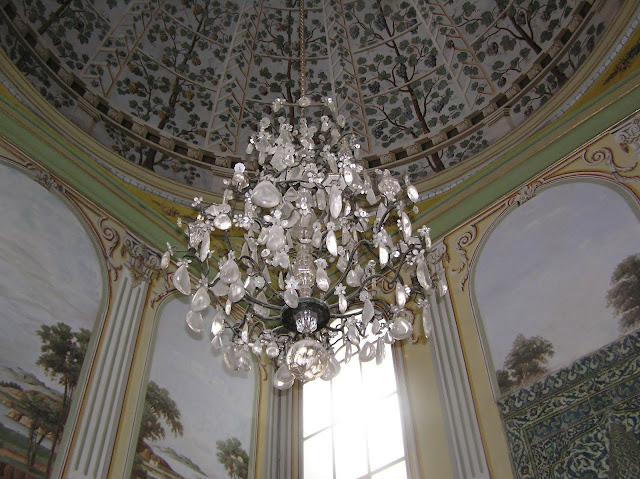 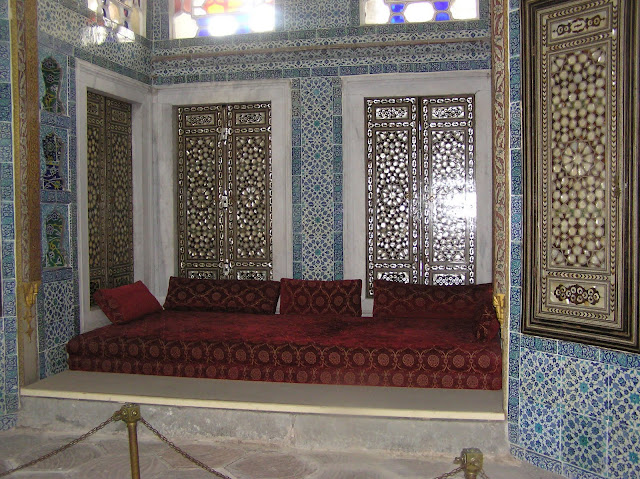 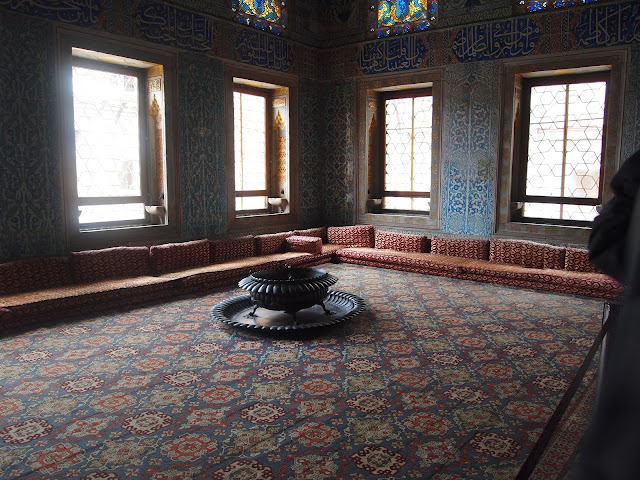 The Treasury rooms were very crowded but gave a very interesting insight into how life might have been. The display of kaftans was amazing, colour, texture, style and size.  Some of those Sultans were very big men, while others quite small and slight. 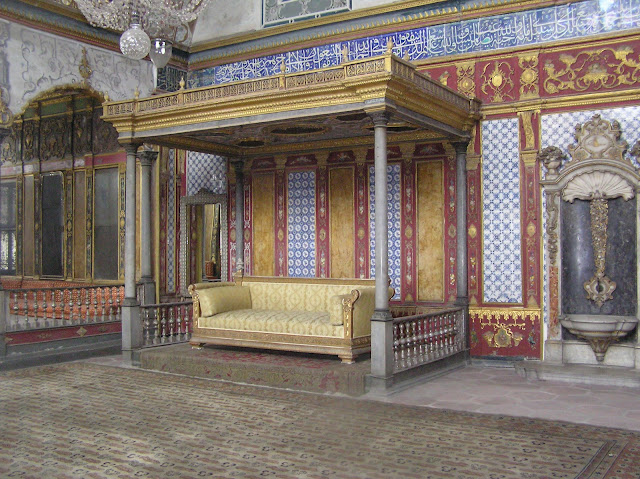 The thrones were also interesting, not a traditional upright bench as we would imagine but ones on which the Sultans would have sat crosslegged. 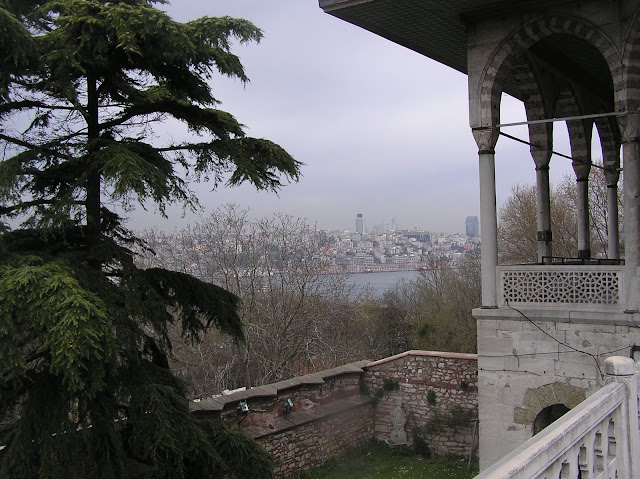 By now, the afternoon was advancing, and the ladies were tired.The crowds and standing waiting to see some of the exhibits was wearing. We decided to call it a day and headed for the nearest available cup of coffee By now İ was almost professional at asking for Nescafe sade süt ayrı- black coffee with milk served separately. Once again İ'm amazed by the reaction to my Turkish. Quite a conversation ensued about links between İreland and Turkey. 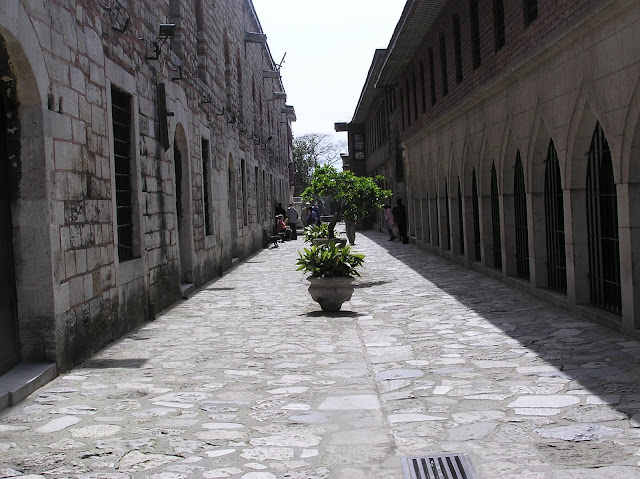 We head for our hotel. İ  leave the others to find their own way back. İ need to buy batteries. The batteries went in my flash. The charger is in Bodrum. İ also need to change some money. I get these jobs done, walk back to the hotel to find İ.m there before them. Oops, Sean's sense of direction again? Well at least İ have some fun with the guy on the desk, Don't  think it will take two hours to walk to the Grand Bazaar. But that is another days work!.
Time to go upstairs and relax for an hour before heading out. We have booked a meal to the Albura Kathisma. I saw it recommended on the Thorntree forum and checked it out on Tripadvisor. The rain had stopped so we decided to walk. We arrived at the restaurant and were seated. The tables were close together and there were people sitting at each side of ours.......challenging for someone who as born awkward and curvaceous to squeeze through without knocking down our neighbours dinner. The menu was wide ranging but we decide to stick to the old Ottoman recipes. We were not disappointed. The staff were friendly. Mehmet our waiter was anxious that we wrote a good review for Tripadvisor, giving  us his name as he  wants to be famous!! 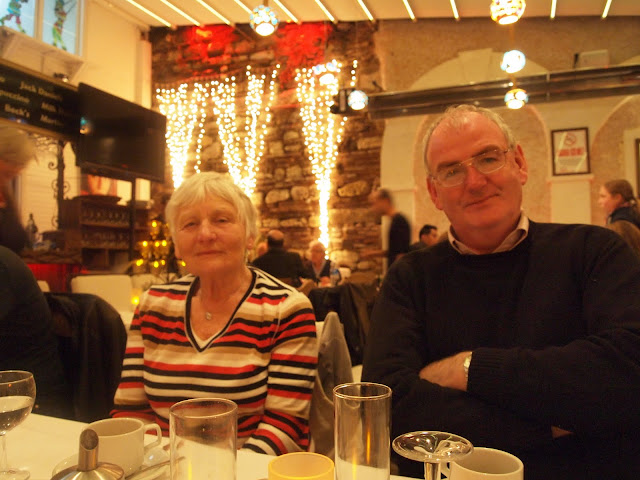 The restaurant is built on top of a Byzantine cellar dating form somewhere between the 6th to 11th centuries. Diners are free to go and explore. The remains were only found 12 years ago and they removed 600 lorry loads of earth during the excavation. Of course, following my usual line of luck, the lights went out while we were down there and we made our way out by the light of Sean's mobile phone. 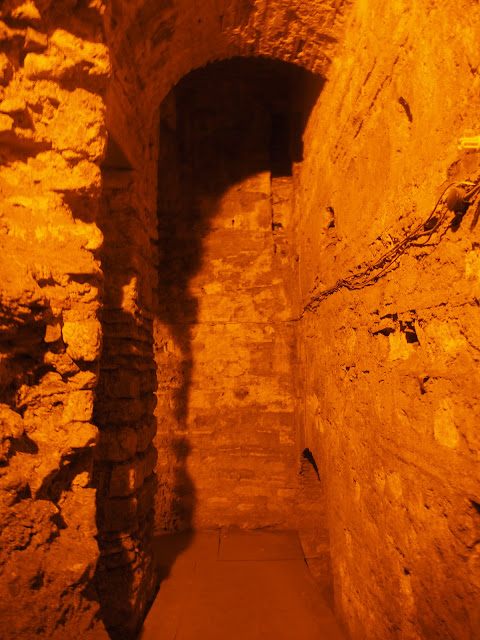 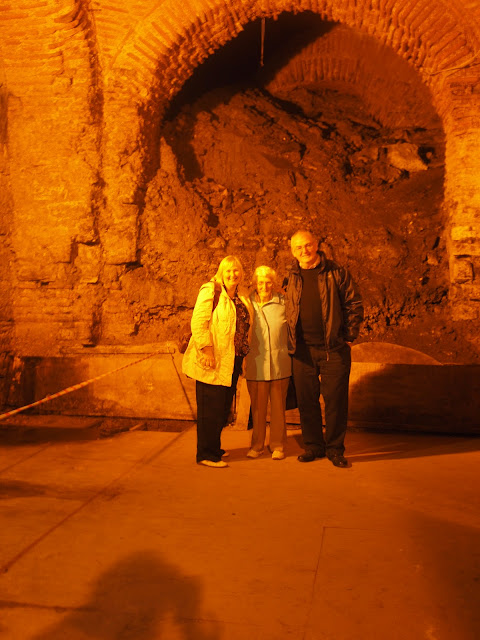 A wonderful evening and of course we again passed the Blue Mosque all lit up on our way home. 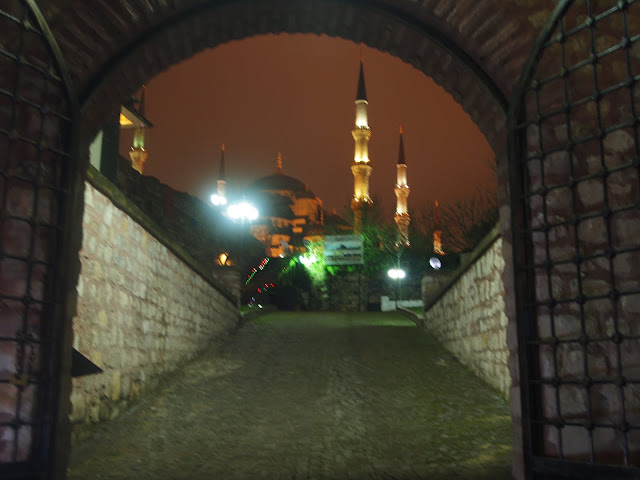 Please note. Some of these photos were taken on  a previous visit, hence the sunshine.
Posted by Maryhocam at 10:58 PM