Monday night, having come back from the restaurant, I checked my messages.  Sean fell asleep as I began chatting to a friend. Necmettin works for Civil Defence in Istanbul and my coming online was timely. He was working on his English and needed help with translation. It was a bit easier than the last time he required my help. That time was how to construct  nuclear shelter, a little too challenging for my vocabulary.

This time it was a joke. A Hazardous Materials Data Sheet.
Of course the hazardous material was a woman. Eventually between the two of us we managed the translation. I then said I had better sign out as I was bringing my Mum to see the Aya Sofya in the morning. He then remembered I was in Istanbul and he wanted to meet us. He asked for the hotel name and our room number. I explained we were leaving tomorrow evening. Then the internet went. The next thing I knew was the room phone rang. Oh my God, Sean is not a good sleeper and once his sleep is broken he finds it had to get back to sleep. I quickly spoke to Necmettin and gave him my mobile number. He would contact me tomorrow. I then had to explain myself to Sean. Another of my Turkish men, ringing me in the middle of the night. I quickly turned out the light and lay waiting to hear Sean begin to snore. If he didn’t go back to sleep I would feel awful. Thank God before long I heard his breathing change and I too went to sleep.
Waking early, I got up and decided to roam the backstreets, to take photos. I set out at seven. The streets were quiet and beautiful. There was such a contrast in the buildings. Some of the old Konaks have been beautifully restored, many turned into small hotels, and some stand side by side with dilapidated falling down buildings.
It is the other side to Sultanahmet and gave great scope to my fascination with doors. I returned to the hotel at eight in time for breakfast. Sean was up, perhaps hoping that my absence meant I had run off, the late night phone call arranging an assignation. Unfortunately there I was. I had my photos to prove my innocence!
I had a slight pain in my stomach but nothing to cause concern. We went up for breakfast and made our plans for the day. We would check out, leave our bags in the hotel and go to see Aya Sofya and the Blue Mosque.
I went to check out, pay the bill etc. 10% discount for cash. I enquired would there be an extra charge. My Mum had four extra guests staying over for two nights. There was a puzzled look from the receptionist.
Do you remember they took a couch out of Mum’s suite to fit in the extra bed? They couldn’t get the couch out the door, so they put it out on the covered part of the balcony. In no time at all, there were 4 new guests installed on the couch. A cat and her three kittens! My Mum spent a lot of time worrying what the staff would do with them when we left.
We were assured there would be no extra charge for her overnight guests, they were an “extra” from the hotel to us. By now I wasn’t feeling great, but thought I would be ok. We went straight to Aya Sofya and joined the long queue. The last time I had been here, a guide approached us and offered a guided tour. He needed  six people, to pay 10 lira each in addition to the entry fee of course. The best part was that we would skip the queue. Sure enough, five minutes later he appeared and the deal was done. As there was four of us he needed to find two more “victims” to make it worth his while. 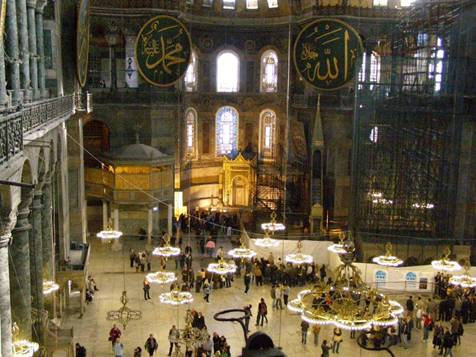 We had almost reached the top of the queue, when he arrived with another couple. He is an excellent tour guide making his spiel both interesting and amusing. He noticed another couple hanging on to his words and told them they were welcome to join us but at a cost. They were elderly Americans, who decided that if you met Irish people you had to have a drink with them. 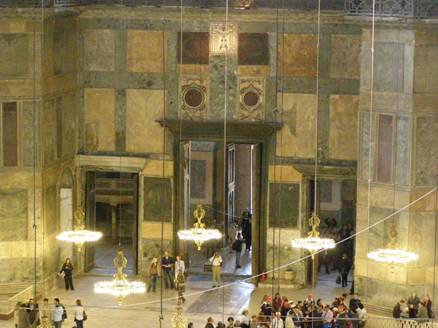 The Aya Sofia, was originally a church, then with the coming of the Ottomans, was turned into a mosque. The frescoes were plastered over as images are not allowed on the walls in the Muslim religion. This lead to the preservation of the mosaics. With the coming of Ataturk he decided to change the mosque to a museum, so as not to cause offence to either the Christian or Moslem religions. 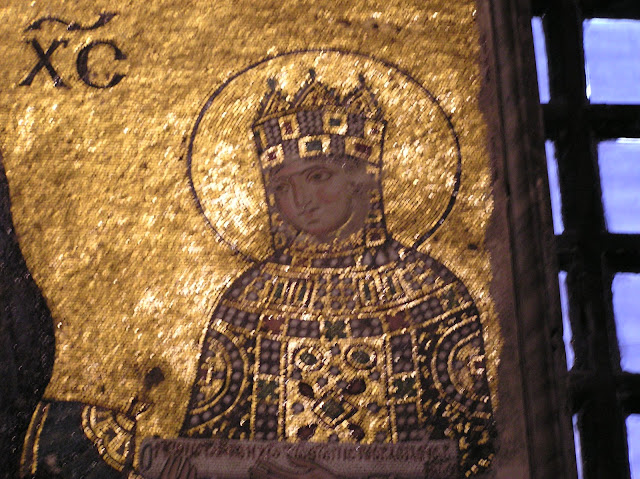 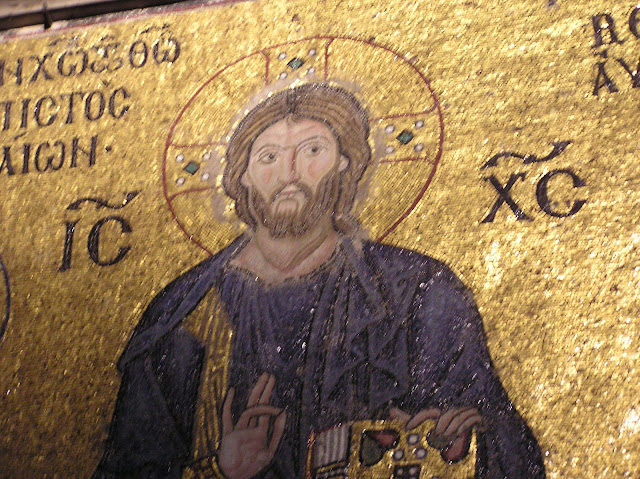 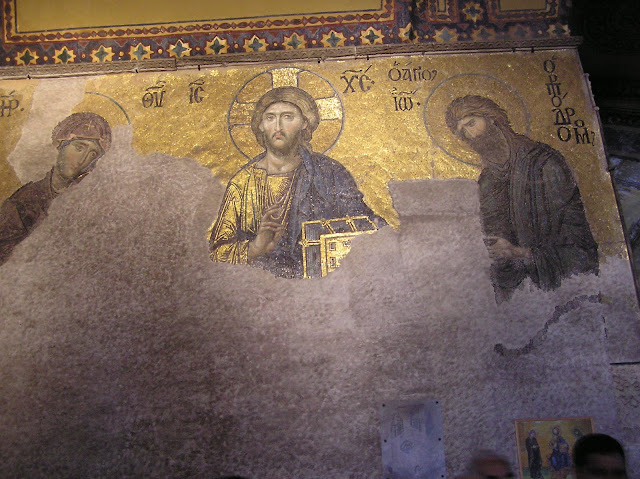 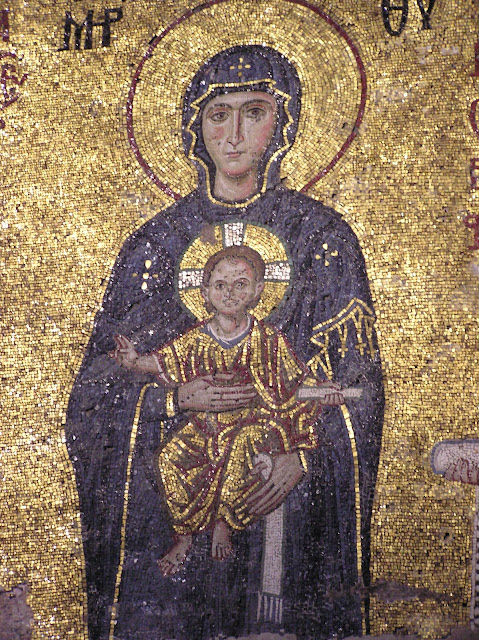 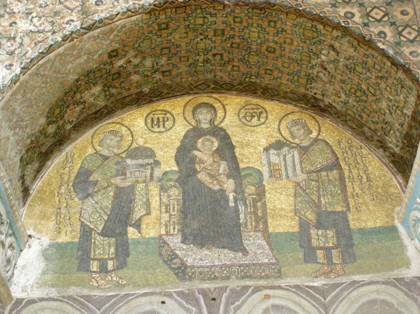 On the walls are large  calligraphies made of wood and camel skin. The names of Mohammad, Allah the first four Caliphs and the two grandchildren of Mohammed are inscribed on them. These remain on the walls as they were too large to get out the doors. Restoration has uncovered some of the original mosaics. 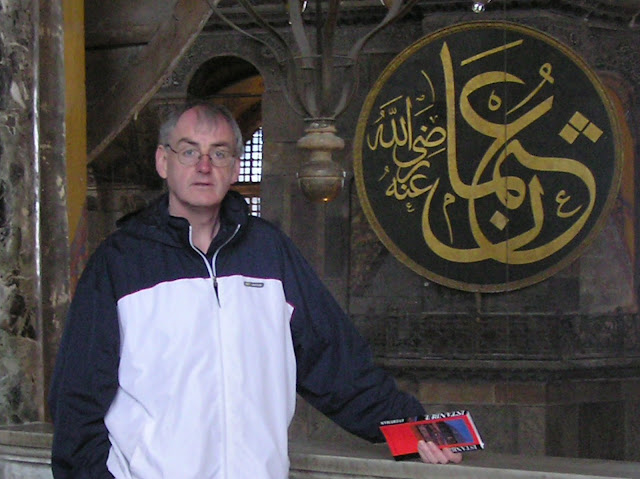 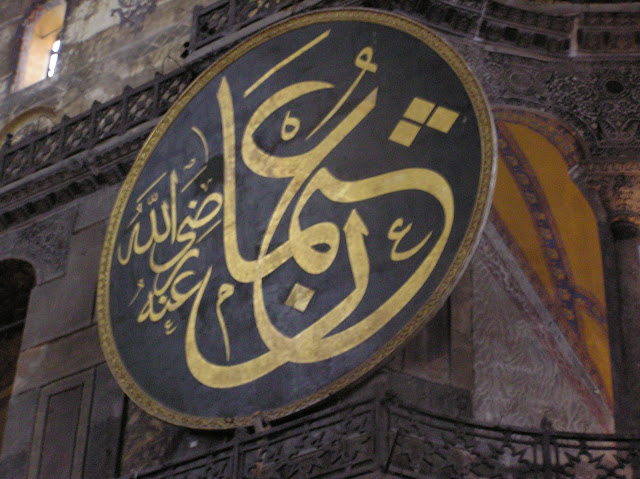 The building inspires awe. Originally chuches were built to face Jerusalem, mosques to face Mecca. Luckily in Aya Sofya the directions were not too difficult to change as there was only a difference of 9 degrees. 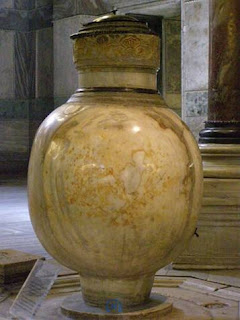 The tour over we gave the Americans the slip and brought Mum and Breda upstairs to see the mosaics. I was still feeling uncomfortabele and decided to go find a toilet. Asking directions I located them to find a long queue waiting. There was a mens and ladies and in between there was a wheelchair toilet. There was a attendant who was calling elderly ladies out of the queue to use the toilet. I was now feeling much worse. I didn’t think I could wait much longer. 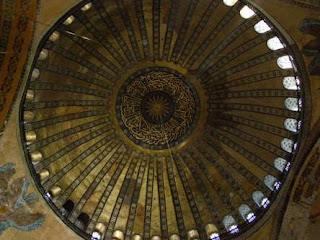 I approached the lady and told her I was unwell. She told me I could use the toilet after the next lady. I told her I was about to be sick. She bypassed the queue for the main toilets and got me to a cubicle just in time. It was the first time I really appreciated speaking Turkish. If I hadn’t been able to explain myself I would have ended up getting sick into the bin I had spotted in the men’s toilet, in front of everyone.
The attendant was so nice to me. She came back to see if I was alright and took care of me. I found Sean and explained. I asked him to bring Mum and Breda to see the rest of the sights while I returned to the hotel to see if they had a spare room, so I could lie down until it was time for our transfer to the airport.
I was lucky because while they didn’t have an empty room that night they had a late check in so I could use the room until five. I took some Motilium, got a bottle of water and lay down. I  slept for a while and felt a bit better on walking. 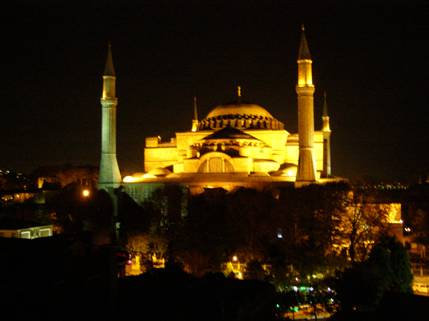 Sean arrived back, they had been to the Yerebatan Cistern, had lunch and then seen the Blue Mosque.  They were now going to wait in the hotel until it is time for the airport. 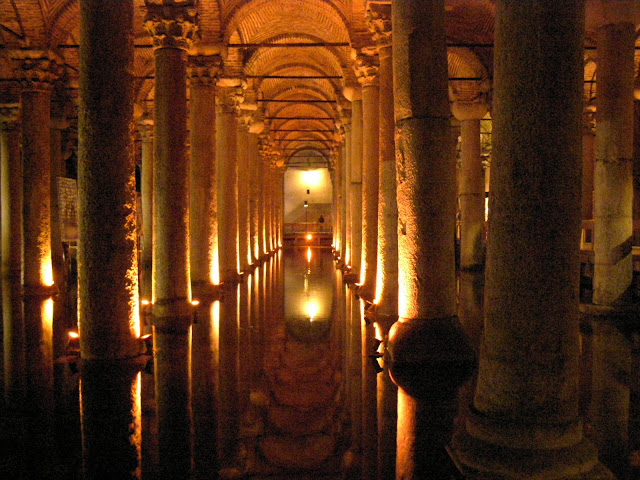 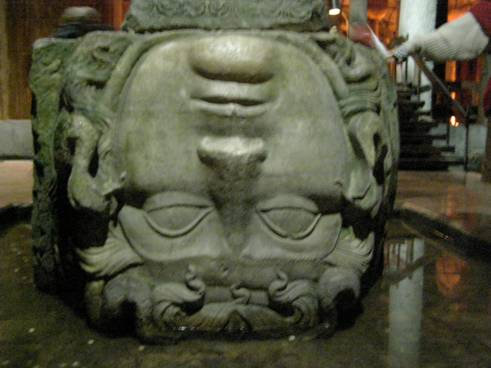 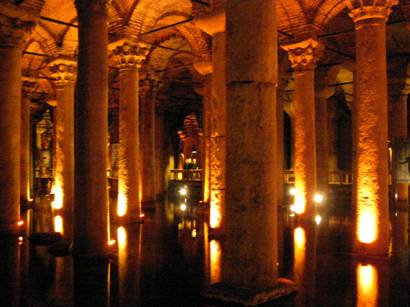 Shortly afterwards Necmettin rang. He would meet us in the airport to say hello. I only hoped I would be okay travelling. 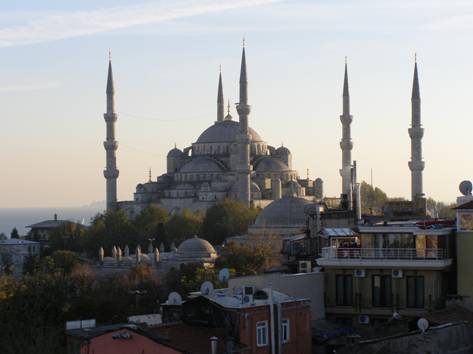 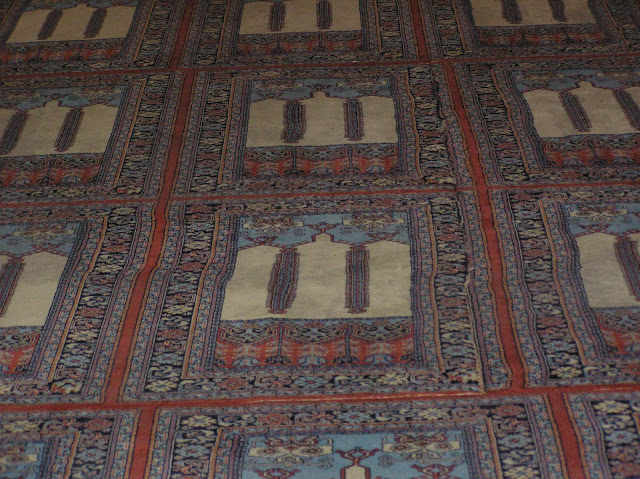 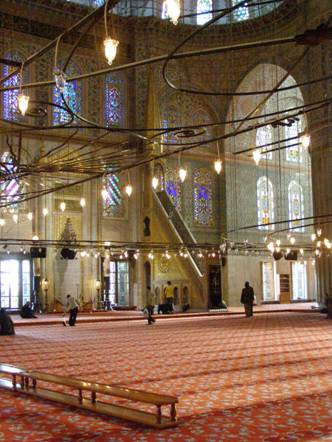 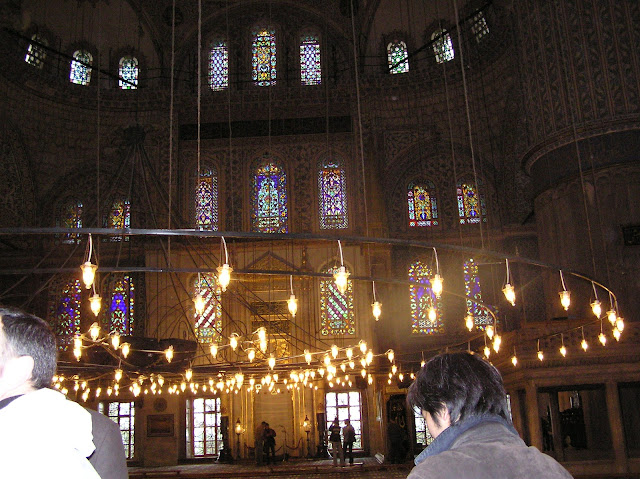 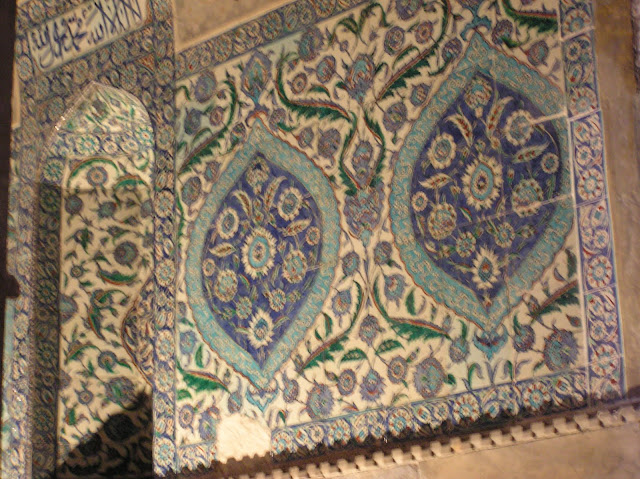 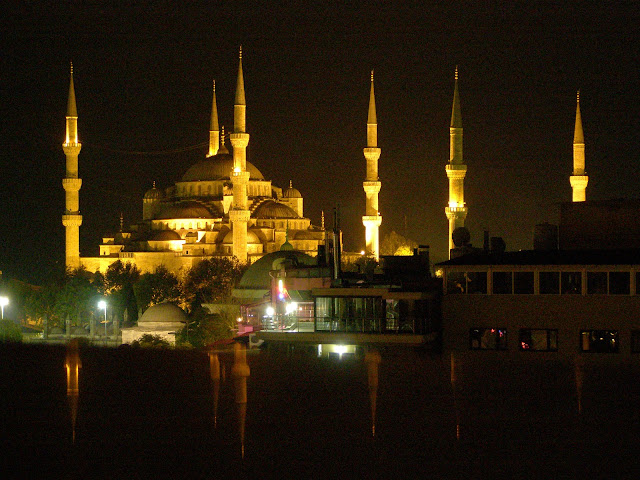 Feeling much better, we arrived in the airport. We checked in and then went to get a coffee to wait for my friend. I stuck to the water. Necmettin phoned and we wandered around trying to find each other. At last we met. It is so nice to meet someone that I have been speaking to for over a year. I introduced him to my family. He was delighted to meet them, his Mum is twenty years younger than mine but he reckoned my Mum looked younger than his. Unfortunately time was short and we had to leave. We sent our regards  to his wife and son. He appears to be a lovely, gentle polite man and I was glad of the opportunity to meet him.
And so on to Bodrum
Posted by Maryhocam at 10:02 PM