On Friday morning we woke up to sunshine, instead of the thunder that had been forecast. We had a leisurely breakfast and set out on our journey. İt was a straightforward journey and TomTom was not required.

However driving with an amateur photographer can be a nuisance. When a field of wildflowers pops up, the driver is commanded to stop and has to search frantically for somewhere to pull in before he has gone too far past. My poor long-suffering husband!

On this trip we had two stops. One for a field of poppies and the other a field of wild flowers. The first stop, there was a good wide margin on our side of the road. A minibus was also pulled in. Sean parked in front of it. There were a couple of men working, surveying. Perhaps they are going to build a new road. Anyway Mum, Bee and I piled out of the car, grabbed our cameras and scrambled into the ditch on the opposite side. İn my case, İ climbed up the wall in the effort to get a better shot. İt soon became obvious that the surveying work had come to a stop. Was it that we had parked the car and it was preventing them from taking their levels, or was it the sight of three mad İrish women in the ditch with their cameras. 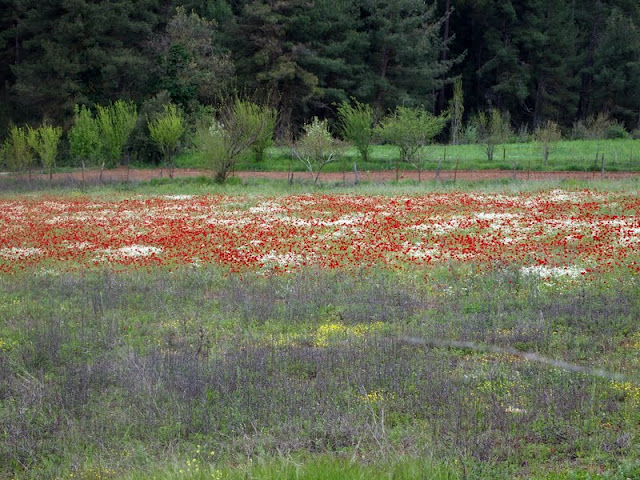 We arrived at Kavaklidere to discover it was market day.  We were lucky to find a place to park, as half the countryside was in town. Everywhere we went we were greeted with smiles. İ don't think they have too many foreign tourists here. As we got out of the car, the thunder rolled.


We wandered through the shops. As usual everywhere you go your hear the tap tap tap as the copper smiths ply their trade.  I have posted about this village previously. Kavaklıdere and the Copper smiths We visited last October. Metin our friend brought two of my friends and I to see the craftsmen at work.


Amazingly, in two of the shops where we had purchased some (lots) of their crafts they remembered me. Obviously once met never forgotten!! But what was even more amazing was that in the second shop, one of the men, reached into a drawer and handed me a dusty camera case. Metin had left it behind him in October and they had kept it. What an wonderful memory. I can hardly remember my own name some days. Even if I found a case and put it in a drawer, it would be half an hour after the owner left, if ever, that I would remember I had it.

We went to a lokanta for lunch. Once more we were the object of some excitement. I ordered for everyone. Shortly afterwards, a man who spoke excellent English came in and approached us. The usual questions ensued, the main one being how had we come to hear about or find Kavaklıdere.


He worked in the tourism industry in Marmaris, in a restaurant where his brother was the chef. The season was late starting. Normally he would be at work by now, but he would start until the following week. Therefore he was at a loose end. İf we needed any help or advice on places to visit in the locality he would be more than happy to help. Then it was coffees all around on the house. This is typical of true Turkish hospitality.

Posted by Maryhocam at 1:44 AM