On arrival in Muğla, it was time to feed the ladies. İ knew of a nice little pide salonu near the Saatlı Kule. However, I didn't know it was the Saatlı Kule at the time. İ tried Saat Kulesi first. A puzzled glance as İ asked for directions, but amazingly İ was understood. Turkish grammar will be the death of me!

Pointed in the right direction İ soon saw a sign with the correct name for the Clock Tower. Turkish lesson for the day!

Mum wasn't feeling the best. While she was not sick, two pieces of Gülsüm's cake last night had left her feeling uncomfortably full. She is not used to eating large portions. Gülsüm had created a veritable feast of Turkish dishes for us the night before . And, as İ have İ discovered to my cost, even though I have learned the words well and their proper pronunciation, Gülsüm, does not understand the word, doydum, I'm full.


Now Mum would have an easier time if only she would play the "I'm old" card. You can get away with a lot of things using this excuse, but Mum would rather die first!!

Anyway, back on track! We arrived at the pide place and watched them go into the oven. Not ours of course. They are made to order. Our choices made ,we went upstairs and looked out on the rooftops. Salad and bread arrived followed by our pide. One word, delicious! This holiday, I have not remembered to take photos of the food until it was eaten. Too late! I looked over to see how Mum was doing. She was finished her pide before the rest of us. She had one piece remaining on her plate. Remembering she wasn't feeling great, she offered it to Sean. She was too full!

Next we began our rambles. Our first stop is at Konakaltı Han, a restored 18th century kervansaray. İt is currently serving as a cultural centre.

Our next stop was the Museum. İt is easy knowing that the tourist season has not yet begun. They could only find one ticket. They went to get another book of tickets but there was none to be found.


Muğla Museum is small. One room has fossils of some of the animals found in the region. İt is hard to believe that rhino and giraffe once roamed the locality.  They inhabited an area that stretched from Spain to Eastern Asia 9-5 billion years ago.

Next is the gladiator room, with the remains of some of their tombstones.


Mum then had her first encounter with the 'turkish toilet.'  Panic set in on seeing the 'hole in the ground' but needs must. Given instructions on how to flush, she screwed her courage to the sticking place and ventured in.

In the meantime İ sat in the sunshine and had a chat with the security guard. Delighted with my Turkish we had a wide-ranging discussion. While discussing the diffıculties of life in Turkey, he was of the opinion that  they would develop quicker as a nation if they were not Muslim.

I'm not too sure that I agree with this. Yes, many people have a wrong impression of the country, think it is more fundamental  - church and state were separated here back in the 1920's. To me it is ideally poised to act as a bridge between its European and Middle Eastern neighbours.


Other rooms in the museum, include an ethnography room and another that displays many of the artefacts found in nearby Stratonikeia.

Next on the agenda was the main reason we had some to Muğla, the Thursday market. This is not like the markets around Bodrum. It is not a tourist market. There was very little sign of the tourist stalls, leather bags, tourist souveniers. It is definitely a local market.


From here, we wandered into the maze of back streets. The narrow shopping streets were organised so that all the hardware shops were in one, bakers in another etc.

From there we wandered among the residential streets where there are over 400 hundred protected houses dating from the 18th and 19th centuries. We stumbled across one, that had many little handcraft shops and a small cafe dotted around its courtyard. The ladies went wild shopping. 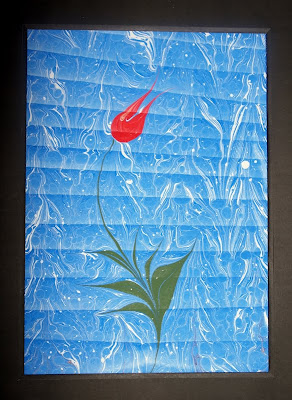 The first shop was selling ebru pictures. This is the ancient art of marbling paper. Natural pigments are added to the surface of water and then applied to a porous surface such as paper.  More on this later! Framed pictures ranged from 30-65tl. while a simple mounted picture (A4) cost 7.5tl, a little over 3 euro. I spoke to the artist and told her she would be extremely rich if she moved to Ireland. 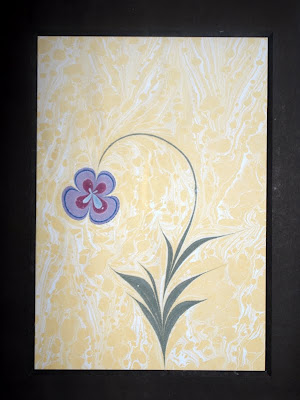 Sean took refuge on a bench, and looked after the bags while the ladies shopped. One craft worker took pity on him and offered him tea. The ladies were shopping up a storm.


Shopping finished we continued our ramble. One lady appeared to be fascinated by us as we passed in the street. I greeted her in Turkish. Immediately she stopped and was full of questions. Where were we from? Had we come with a tour? How come I spoke Turkish?.......... 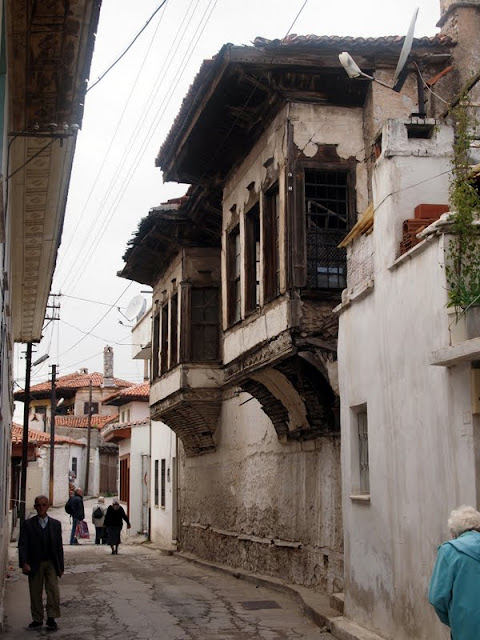 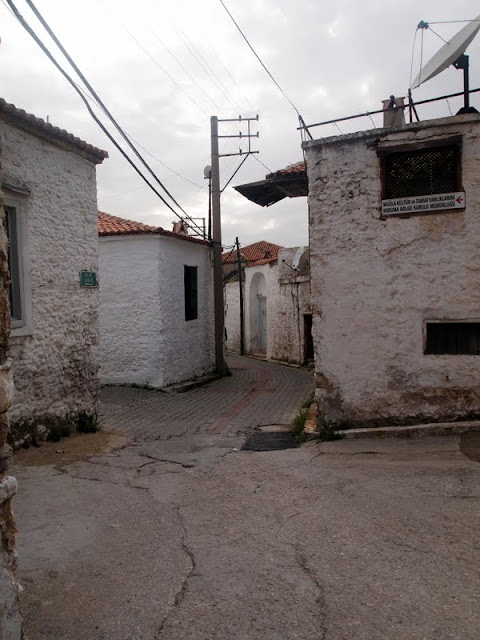 Finally we seemed to come back to the main part of the town. I approached a policeman and asked for directions to the street where we had parked our car. There is a great kick, now, in asking for and receiving directions in Turkish and actually understanding them.

We arrived back to the car and from there we headed back to the hotel for the evening. We enjoyed our evening meal and retired early. We would meet for a lazy breakfast in the morning and then on to Kavaklidere.

Posted by Maryhocam at 2:29 AM